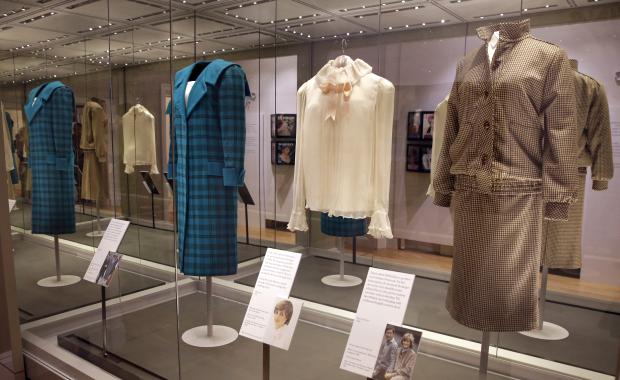 Dresses that tell a story: Princess Diana’s life in fashion

LONDON — The dresses tell the story of a life cut short: first the frilly debutante frocks Princess Diana wore before she married Prince Charles, then the elaborate gowns that stunned the world, and finally the power suits she favored shortly before her death.

It’s been 20 years since Diana died in a Paris car crash at the age of 36, but the public’s fascination with her life – and her clothes – lives on. A new exhibition that opens Friday at Kensington Palace, her home for many years, will give the public a chance to see extraordinary fashion pieces up close for the first time.

The workmanship is refined, some of the designs are simple in concept and execution, while others clearly took careful thought and meticulous preparation.

One room features designers’ sketches for Diana dresses, offering insight into the vision behind many of her choices.

Deirdre Murphy, senior curator at the Historic Royal Palaces, said Diana was unique in the way she used clothes to communicate – and also a risk-taker willing to challenge the unwritten conventions of royal dress. She said Diana captured the “mystique” of being a princess even as she occasionally dressed down in jeans and a baseball hat.

“Somehow women all over the world saw a piece of themselves in the princess,” the curator said. “She got her image across and her ideas across using clothing in a really sophisticated, really smart, really thoughtful way.”

The display opens with a lacy party dress Diana wore to a ball at her family home, Althorp, in 1979 and includes many of her most famous outfits. Here are some of the most illustrious:

Dancing the night away, with John Travolta

Diana was married to Prince Charles, and a guest of President Ronald Reagan and his wife Nancy, but that didn’t stop her from tearing up the dance floor with John Travolta at a White House state dinner in 1985.

Photographers of Diana and the dashing young Travolta dominated newspapers throughout the world, showcasing the midnight blue silk velvet evening dress designed by Victor Edelstein. It remains one of her most famous outfits.

Catherine Walker became one of Diana’s favorite designers. To prepare for an official visit to Hong Kong in 1989, she designed a strapless white silk crepe and jacked embroidered with sequins and pearls. Its sparkly look, and high collar, reminded fashion writers of the jump suits favored by Elvis Presley late in his career.

She looked resplendent in the outfit, topping it with a jeweled tiara. “She shone in the dress and the dress shone around her,” Walker said.

Diana turned to Emanuel, designer of her wedding gown, for a 1985 official royal visit to Italy. A coat and skirt in green, blue and black was cut in the boxy shape in favor at the time.

The tartan wool day suit was not well received by critics who didn’t find it flattering.

For her honeymoon photos with Charles taken in the lovely Scottish countryside, Diana turned to designer Bill Pashley for a casual, comfortable brown tweed woolen day-suit.

She had two versions made — and chose to wear the larger one on her honeymoon because the extra room allowed her to participate in outdoor activities more easily. Its tweed motif pays tribute to the countryside traditions.

Diana relied heavily on Walker at various times in her life, and she turned to Walker again in the years just before her death to help her refine a “working princess” style in line with her plan to devote more time to charitable activities.

She wore a red day suit by Walker to launch an AIDS charity appeal in 1996. Walker called the outfits she was working on at this phase a “royal uniform” for Diana, who was outspoken in her support of AIDS victims. –Gregory Katz