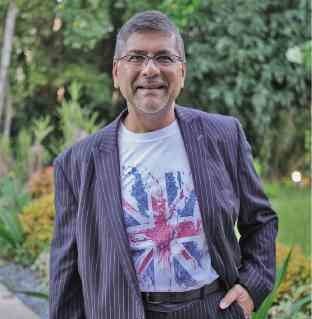 British Ambassador Asif Ahmad on the Great British Festival this weekend: “Wewill go beyond what you can imagine.” —PHOTOS BY JOHN PAUL R. AUTOR

Borough Market at BGC: the Great British Festival is back

On the third installment of the Great British Festival last year, Asif Ahmad, the British Ambassador to the Philippines, was told an “Abbey Road” was among the iconic United Kingdom landmarks recreated in miniature in the event’s venue, Bonifacio High Street (BHS).

The mini landmarks had been a hit with selfie-loving Filipinos when they were introduced in 2015. The envoy was thrilled to see the new addition to the mini icons, which already included Big Ben, Buckingham Palace, a red telephone box and a double-decker bus.

But to his dismay, “it didn’t work,” Ahmad told Lifestyle with a wry smile at a tea party in his home this week. “This year, they promised me, it will be in a standout place where everybody can be The Beatles,” he added.

The tea party was to announce the festival’s fourth edition. It begins today and runs until Sunday (Feb. 24-26) in the same Taguig venue—the last during Ahmad’s tenure. He leaves for his next posting in July.

Since the festival began in 2014, Ahmad and his embassy team have been working at growing the event each year. Aimed at showcasing the best of British culture and brands, it will occupy the entire BHS strip this weekend with 105 participating brands.

“We got to a point where we had to ration the space, rather than wonder whether or not someone would join,” he said.

The UK is the Philippines’ biggest foreign investor from the European Union, according to Ahmad.

The year’s theme is “Market,” a departure from last year’s “West End Theater.” Ahmad noted that Filipinos who have traveled to Britain love Borough Market, the popular food market in Central London, and his team aims to replicate that with various food stalls, as well as local restaurants serving quintessential British pub grub.

Vibrant food markets are a way of life in the UK, where growers come to sell their produce, he added. “We want Filipinos to come and experience that.”

There will be live musical performances and a “Rockaoke” contest, and a fashion show of British brands. There will also be booths for students who wish to know more about British education. Airline tickets to London will be raffled off.

London-born Ahmad, 61, the son of a diplomat and an author-social worker, has a special fondness for the Philippines. Supertyphoon “Yolanda” happened not long after he presented his credentials to President Aquino in 2013.

“You see the true nature of people when they’ve lost everything. We were treated as trusted friends,” he said of his encounter with calamity victims.

The ambassador’s partner, Kim del Mundo, is Filipina. He speaks Filipino—one of seven languages he knows. At the tea party, he greeted the media guests in the vernacular, which he later translated to English for the benefit of his compatriots.

This weekend, Ahmad said they’re bringing back the Anglomania elements that were big hits in the previous years, among them the “Game of Thrones” iron throne, which has been borrowed by fanatics of the TV series countless times, but has been repaired and ready for wannabe rulers of King’s Landing.