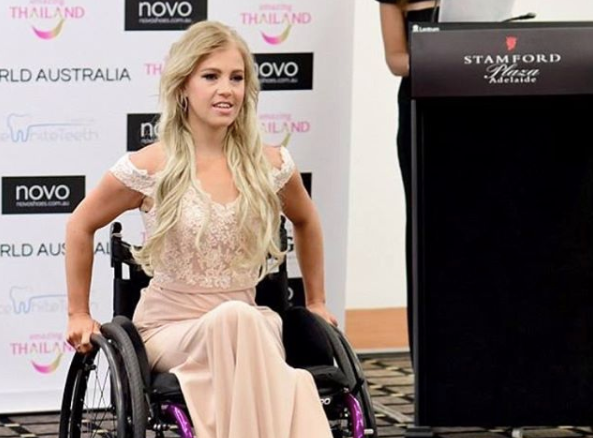 Even a wheelchair could not prevent a brave contestant from competing for this year’s Miss World Australia.

Twenty-six-year-old Justine Clark became the first woman to step out of her comfort zone and participate in the state finals of the beauty pageant in Adelaide on Sunday.

Though she was unable to advance to the next stage with contestants Aishah Stocker and Sophie Ludbrock, Clark still has the chance to wheel to the national finals. She can raise the highest funds for her chosen charity through the organization’s Beauty with a Purpose campaign.

Beauty pageants nowadays serve as an integral venue for women to campaign for diversity, equality and female empowerment, and Clark, who has been confined to a wheelchair for the past two years for lower-leg deformity, plans to uphold these principles in her quest for the shining crown.

“I don’t really want to go into what happened but I want to be a role model and empower young women,” Clark told local news site The Advertiser, declining to reveal how she was unable to walk. “For somebody in a wheelchair to be able to compete is a big thing. I really hope it sends a message that no matter what your race, size or disability — whatever makes you different — you are beautiful.”

She also aspires to make the pageant catwalk inclusive for women with disabilities. “I want the catwalk to be a fair and inclusive place for everyone,” she added. “A wheelchair does not define me or limit me. I can still be strong, feminine and beautiful.”

Just like Clark, other women with disabilities made it big at beauty competitions. In 2008, Miss Iowa Abbey Curran became the first woman with cerebral palsy to compete for Miss USA. On the other hand, Nila Morton, a 17-year old diagnosed with muscular dystrophy, won Miss Congeniality at Miss South Carolina Teen USA in 2016.  Gianna Francesca Catolico /ra