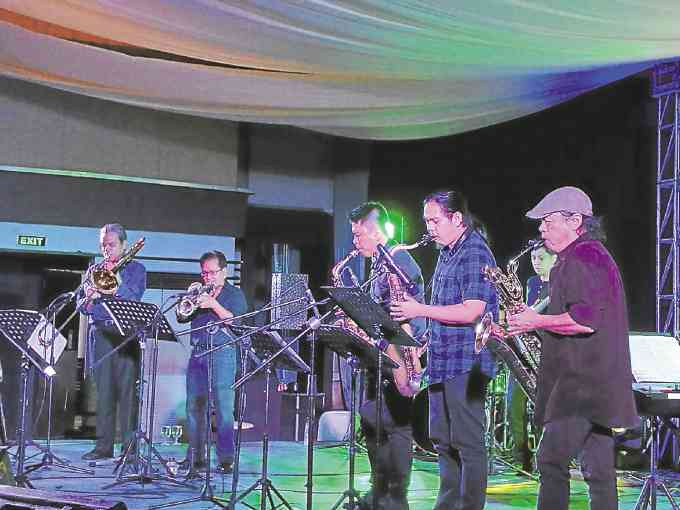 The horn section of the AMP Nonet —POCHOLO CONCEPCION

Chill music, tasty food and saucy conversation made some guests stay longer than usual in the recent birthday party of Rhiza Pascua, whose company, Music Management International (MMI), is the top international concert promoter in the country.

The party, organized by MMI staff, was held in the spacious Dasmariñas Village home of Mals Ledesma, Pascua’s chief of production.

Present were Pascua’s friends and business partners in the performing arts and broadcast industries. Seated in a corner in the lanai were Veana Fores of the Araneta Group and a few executives of ABS-CBN.

At a table by the swimming pool were talent manager Girlie Rodis and some friends.

Across that group were TV5 bosses led by Chot Reyes.

The buffet table was laden with specialties from Alba Restaurante Español, Cibo and Gerry’s Grill.

There was free-flowing red wine, and as the night wore on, the conversation centered on a certain entertainment figure and avid supporter of President Duterte who was said to have lobbied for appointment in government.

This appointee, who allegedly ruffled not a few feathers in his new office, asked to be transferred to another post, this time at PTV-4. But management of the broadcasting network put its foot down, said one executive, because the appointee’s credentials didn’t mean much.

In the wee hours, Pascua still looked vibrant in her blazing red outfit, hopping from table to table, stopping to chat and pose for photos with Grace Kelly Inductivo and sister Jacqueline. The Inductivos’ youngest sibling, Helene, is married to Jay Durias, whose band, South Border, was one of the first groups that Pascua promoted in concerts in the US.

Pascua’s MMI has partnered with Live Nation, the global concert production, venue operation and artist management company, which explains why Filipinos get to watch the biggest and latest music acts live.

Highlighting the show, which started 7 p.m. and ended past midnight, were inspired performances by Puyat, who fired off hot guitar licks with Kedy Sanchez of Working Stiff, a band popular for its contemporary jazz repertoire.

The AMP Nonet, performing in the annual Bacolod jazz fest for the first time, dazzled the audience with swinging numbers that included refreshing brassy renditions of Henry Mancini and other classic international artists.

Lifestyle was also covering the event for the first time, and we were glad to have made it to Bacolod, which is known for having produced some of the country’s finest musicians, Gabe Ascalon and Bob Aves among them.

In the show, Aves was given a Lifetime Achievement Award by the Bacolod jazz fest’s organizing partners in the Philippine International Jazz Festival.

Producing such a major show like the Bacolod jazz fest on a yearly basis requires commitment and resources. Credit goes to Bacolod’s native son, Bob Coscolluela, whose prime motivation is his love for music.