Meet the (other) Filipina in ‘Hamilton’ | Inquirer Lifestyle ❮ ❯ 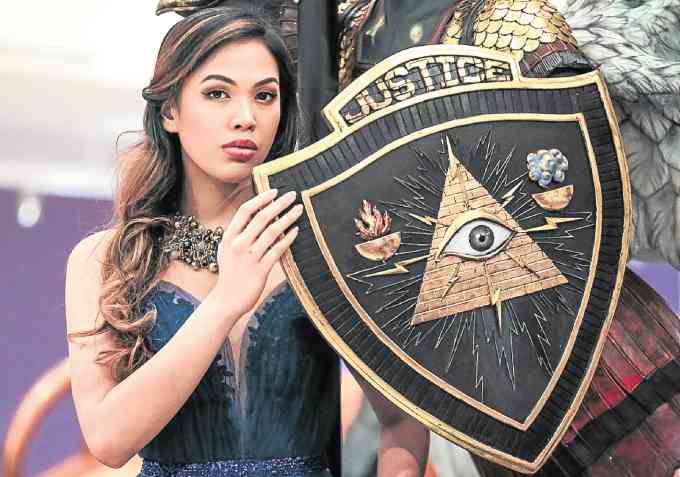 Meet the (other) Filipina in ‘Hamilton’

A woman’s strong but pleading aria lured visitors to sculptor Ronald Ventura’s carousel of bizarre beasts in one of the galleries of the Metropolitan Museum in Manila one afternoon recently.

Christine Allado, one of two Filipino singers who will soon rock London’s West End, was singing “O Mio Babbino Caro,” an aria from Puccini’s “Gianni Schicchi.” She is Lauretta asking her father to let her marry her lover lest she kills herself.

Museum guests were in for more pleasant surprises. The singer followed up with Christine Daea’s “Think of Me” from “Phantom of the Opera” and, later, a rap number by Peggy Schuyler from Lin-Manuel Miranda’s phenomenal hit “Hamilton.”

The applause that followed was not surprising. Following its Broadway success, “Hamilton” will open at London’s Victoria Palace Center in December. Allado will star with singer Rachelle Ann Go and rehearsals begin in September.

Apart from the character of Peggy Schuyler, sister in law of Alexander Hamilton, Allado will also perform as Maria Reynolds, the lead character’s mistress.

She’s in Manila on a holiday but there’s a busy schedule to attend to.

Tomorrow (Thursday, March 2) Allado will perform with Australia-based tenor Jon Joven at the Met Gala, an event to be attended by art collectors (mostly fans of Ventura’s work), directors and supporters of the Met Museum.

Her father, lawyer Jojo Allado, will join the singer on Saturday when she performs pop and classic songs, numbers from West End musicals in “Songs of A Lifetime” at the Maybank Performing Arts Theater in Bonifacio Global City, Taguig.

Allado, only in her mid-20s, has a formidable CV. After earning her masters in Music and Theater from England’s Royal Academy of Music, she became understudy for the role of Imelda Marcos in “Here Lies Love” at London’s National Theatre; understudy for Lorene in “From Here To Eternity” at the Shaftesbury Theatre; and as Girlie in “Beyond the Fence” at the Arts Theatre.

She has played the title role in “Turandot: Reimagined” in a Tête à Tête Opera production. She was cast as Anne Bronte in the rock musical “Wasted” at the West Yorkshire Playhouse, and as Maria in “West Side Story” for the British Broadcast System’s 60th anniversary.

Her most recent performances were as Vanessa in “In the Heights,” another Lin-Manuel production, at the King’s Cross Theatre, and as Ursula in the Royal Exchange Theatre’s musical “Sweet Charity.”

Most memorable, however, was having been Andrea Bocelli’s duet partner when he performed in April last year in Manila. So pleased was Bocelli that he invited her to join his concerts in the United Kingdom and Scotland and in Slovenia.

Her mother, Letty, a financial planner, paused for a moment when asked what her daughter wants next after “Hamilton.”

“She wants to conquer Broadway, I think,” Letty began. “But, sino pa ba’ng kakausapin mo after Bocelli,” the mother followed up.

Music and singing run in the family. Father Jojo is a baritone (“He sounds like Martin Nievera with a bigger voice,” said Christine), while Letty is a soprano.

Mom listened to a lot of music while carrying her firstborn. So it wasn’t surprising that Allado thought she was Ariel, the Disney mermaid, while growing up.

At age 7, Allado was part of an extension program for gifted kids at the University of the Philippines College of Music. Two years later, soprano Fides Cuyugan Asencio took her in as a voice scholar.

Things got a little confusing however, as the young opera talent grew up while Britney Spears was dominating the pop charts.

“Fides said my voice was a gem, one of a kind, but at that time it was not cool to sing opera. I wanted to be a pop singer. All my friends sang pop music,” Allado recalled.

In college, she studied business administration at UP Diliman and was doing theater productions on the side when she heard of a casting call for Hong Kong Disneyland. She was set to do “High School Musical” but her family wanted her to finish college first.

“Looking back, I wish I did.  It’s nice to have a UP degree, and in early 2009 when I went to Hong Kong, I didn’t know anyone there. But mom said (there are) some life experiences you can’t pay for.  Some life lessons you gain by doing other things.  I totally believe that,” Allado said.

It was also mom who brought her to Singapore to see “Lion King” during her birthday.  She took seven days off from Disneyland and flew to London to join six auditions, the first of which was ongoing just as her plane landed.

“I got my dream school, the Royal Academy of Music. I moved to London, it was such a culture shock,” she said.

Allado finished her course and wanted to stay on. Friends and employers were helpful but she remembers going to an endless cycle of auditions and rejections.

“I had an entire year of nothing,” she recounted. “I did not get anything. I was working in a casino, I was handing out flyers, I would be an usher. I was really close to throwing in the towel and thinking of doing something else, but stuff happens. I changed my agent and it catapulted from there.”

Allado initially didn’t want anything to do with “Hamilton.”

“I refused to listen or watch it, kasi hype, eh… But a friend put his laptop in front of me. I was blown away by the part where Aaron Burr says, ‘And me, I’m the damn fool that shot him.’ Spoiler kaagad?! Wow, it says a lot about the show,” she narrated.

Allado liked that “Hamilton” has “broken many boundaries and stands for many things” and nearly all her contemporaries wanted a part when auditions opened.

“I sang five times,” she said.  “The last time, Cameron Macintosh was in the panel. I sang, he looked up and looked at my CV.”

Allado was still doing “Sweet Charity” then and purposely kept thinking of other things following the audition, until her agent called to say she will be “in the coolest show of the year.”

Another thing, the agent added: “You can’t tell anybody. You will be playing Peggy Schuyler and Maria Reynolds.” Allado screamed, cried and called mom because she doesn’t count as “anybody in London.”

Allado will chill in Manila while waiting for “Hamilton” rehearsals to start. In the meantime, she intends to make music “that fuses what is amazing” about classical music, hip-hop, R&B and musical theater.

“I got amazing songwriters who are my friends, music producers,” she said. “I just need to find a way to do it. I need to find people who will help me in my journey.  I got people who want to do shows for me in New York. Fingers crossed… And, hopefully, tour again with Bocelli.”

Allado’s eyes flash with an aggression that, her mom said, her agent calls tenacity.

“There are a lot of times when I wasn’t picked. I guess when something is right for you… it takes the stars aligning, so many factors and it’s out of your control most of the time,” she said.

“All you can do is be ready.  That’s what I try to do—have the tools and skills to be ready.  I can perfect my craft and sing as best I can … I love it, I want it so much, I don’t know what it is (but I’d rather die than not do it,” she added.