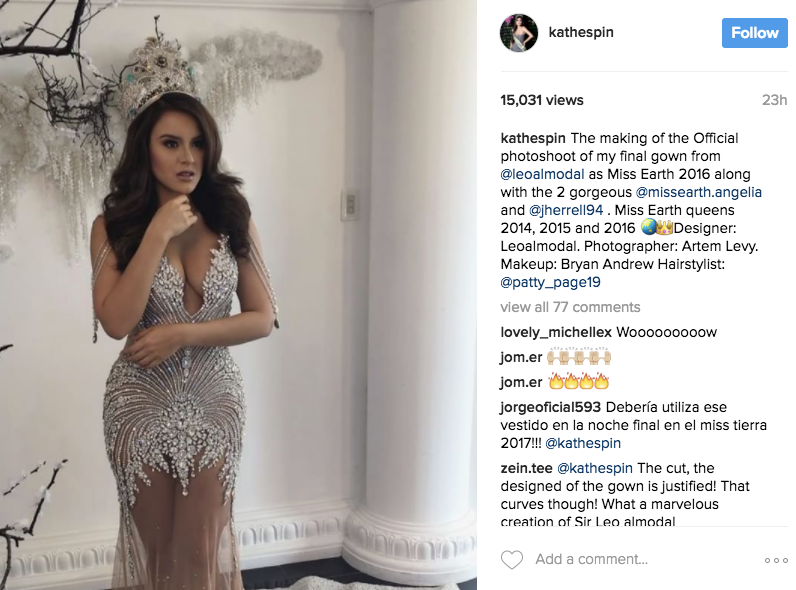 Finally, Miss Earth 2016 Katherine Espin got to wear the stunning gown originally made for her on coronation night last October.

In a series of posts on her Instagram page, the Ecuadorian beauty queen couldn’t help but swoon at the glamorous sequin-printed garb created by Filipino designer Leo Almodal. “I present to you the final gown I was supposed to use on the final night of Miss Earth 2016 but due to some inconvenien[ces] it wasn’t finished in time but now it’s finished and looking absolutely fabulous,” she captioned one of her posts on Tuesday.

Also, she uploaded a selfie with Almodal’s obra maestra, captioning it with, “Dreaming awake, living my dream, and enjoying every day under my motto makes everything come out perfect!”

Espin, 22, is currently in the Philippines fulfilling her Miss Earth duties and touring key sites in the country.

Moments before the Miss Earth 2016 evening gown competition, Almodal was distressed to realize he could not finish the final touches of Espin’s gown. Instead, he handed Espin a bright yellow gown originally custom-fit for former Miss Earth Philippines Imelda Schweighart.

In a fretting response to the gown-swapping incident, Schweighart, who resigned as Miss Earth Philippines following a stream of controversies arising from her statements, posted sketches of the yellow gown on Facebook last year.

According to Almodal, the Filipino-German beauty queen fell short of her bid to the pageant’s Top 16 and no longer needed the dress. Hence, he lent it to Espin, who was crowned as the winner.  Gianna Francesca Catolico /ra