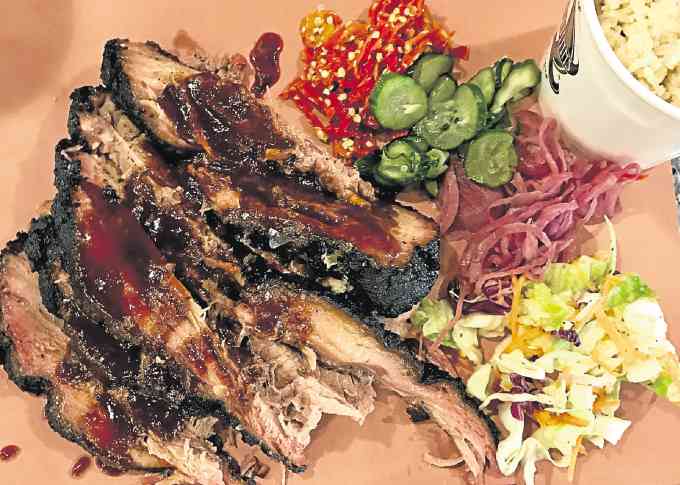 What’s the difference between “to diet” and “to reduce”? Answer: about 30 years.

Apparently, no one says “reduce” anymore, as a verb that means to go on a regimen to diminish one’s waistline and generally improve one’s health. It’s Filipino English, of course, but I still like it better than “diet,” which could be any sort of faddish thing like avoiding gluten, or eating only things that are colored orange or rhyme with orange—or eating only oranges.

My attempts to reduce my caloric intake have been at odds with my quest to find the best smoked barbecue place in Manila. We usually end up at Holy Smokes because it’s conveniently near, and has been consistently good. They still don’t take credit cards, which is fine, but no reservations either, which makes me gnash my teeth.

I have a long way to go with my research: There are at least 11 places left to try, and even if I eat nothing but malunggay and turmeric and coconut oil, these meals do make a significant dent in one’s caloric intake.

Mighty Quinn’s is a franchise, which is something I  found out only afterwards. Not looking like something that’s a franchise is usually something to be aspired to, but, in this case, I thought that they hired the same interior designer as every other new restaurant in the city, with exposed light bulbs and white tiles and chalkboards.

It’s a restaurant out of Brooklyn, straight out of hipsterville, and so its barbecue doesn’t strive for authenticity in terms of being tied to a certain region.

Various sources break it down differently by region, but there’s a general consensus as to Memphis, North Carolina and Kansas City styles. The more obsessive taxonomists will distinguish between North and South Carolina, East and South Texas, and will add Florida, Hawaii and New York.

So, yes, apparently New York barbecue is now a recognized regional variant, the way the American Hairless Terrier is now accepted as a canonical dog breed by the American Kennel Club.

Their website says that Mighty Quinn’s “borrows from the great barbeque traditions of the past to create our own style of ‘Q.” I still object to spelling barbecue as “barbeque,” which should actually be pronounced “Barbie Que,” who might be someone I used to know from ICA. But I digress.

The brisket at Mighty Quinn’s is flavorful and tender, but not as juicy as it could have been. This is one of the problems faced by many barbecue places: When the meat emerges from the smoker, it should ideally make a short trip directly into my mouth. At six o’ clock when it’s fresh it’s great, but every hour that it sits makes it progressively dryer, until it becomes little gray strips like pencil eraser rubbings.

Unlike the boutique Poblacion places, which do a single serving in the evenings, Mighty Quinn’s has to follow mall hours, so the brisket has to be ready at any time between the mall’s opening hours and when it closes at night.

We were there for lunch, which is not an odd hour, but the brisket felt like it had been lounging about for a while—unless, of course, this is the New York style, which really I don’t know much about.

But the same holds true for Smokeyard or Holy Smoke: If you arrive when the place opens and they’ve just taken the meat out of the smoker, it’ll be different than when you arrive at half-past seven. And ultimately this is a bit of a quibble: Mighty Quinn’s brisket is really very, very good, but standards have simply become that high in Manila.

The sides are excellent as well. Everyone likes to say that they have great sides “unlike the other guys,” but actually I’ve found that most restaurants are fairly consistent with their sides, and Mighty Quinn’s is no exception.

They also have a good selection of pickles, which helps cut through the fat.

On the other side of town, meanwhile, something completely different was brewing. Coffee Bean and Tea Leaf (CBTL) invited me to a tea appreciation session led by David De Candia, the tea master at CBTL headquarters. I believe Senior Director of Tea is his official title.

He came bristling with a list of his endowments, such as Ambassador for Ceylon Tea, conferred by the Prime Minister of Sri Lanka, among others. I was expecting a wizened old man, but he is a casual, informal man with close-cropped hair and a lazy California drawl.

Before anyone says anything, I am aware of the delicate politics of the tea world: What is a white man doing whitesplaining tea to us brown people, anyway? Tea belongs to brown people! We were drinking tea when your ancestors were boiling reindeer hooves!—and so on.

But part of the inherent democracy of the tea world is that anyone with the curiosity and desire to explore, and the nose to discern, can become an expert at tea.

I asked him a question that had been burdening me for some time: How much of tea is about packaging and marketing, and how much actual value was there in an expensive blend?

He was surprisingly frank. “There’s no grower out there who sets out to make bad tea,” he said. “But everyone needs to take a cut—usually there are about five people making money between the bush and your cup. So either they push the quality down by forcing the growers to cut corners; or they do fancy packaging and naming so that they can make more money.”

De Candia represents a third option: He leverages the bulk buying power of CBTL to cut through the middle three (wholesaler, exporter, importer) to form long-term relationships with the growers. He said he was not against blends per se, but, strictly speaking, anything from more than one estate was a blend.

As something of an obsessive myself, I wanted to talk about thermometers and brewing times with him, but he said he preferred to look at the water: “shrimp eyes,” analogous to the size of the bubbles at the bottom of the pot, were best for very delicate unfermented teas, progressing to “crab eyes” and “fish eyes.”

So, just get an electronic tea kettle that regulated the temperature electronically.

“You don’t want to make it too complicated,” he said. “Coffee is easy; most people will have what’s there. With tea, you gotta know what you want, whether it’s green tea or black tea. You have to know how long to steep it.” (Yes, I can hear the fingers of the third-wave coffee people bristling at the keyboards.)

“My perfect life would be to just swim, hang out with my kids and my dogs, and drink tea,” he added.

I could not agree more.  —CONTRIBUTED