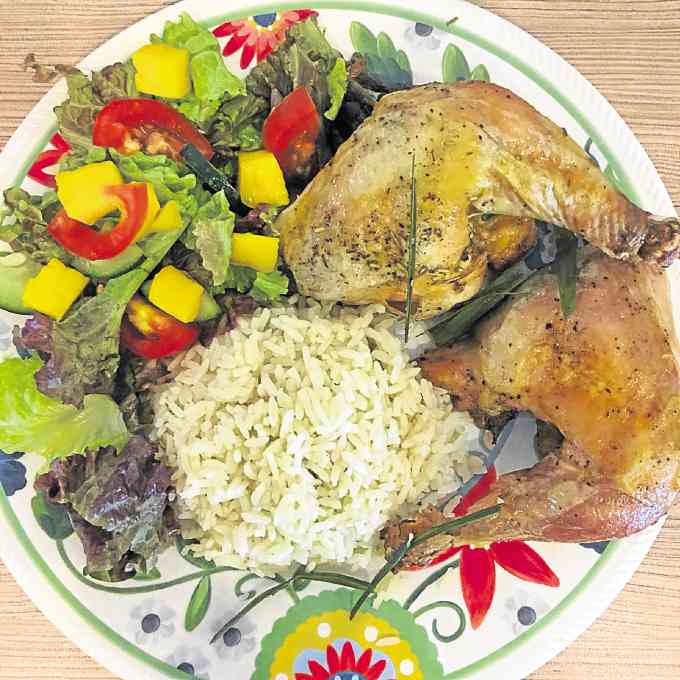 10 new must-try dishes in the metro

With a new restaurant opening practically every week, it’s unlikely you’ll run out of options when dining out in Manila. On the contrary, you might get overwhelmed.

There are just so many choices, from food parks and weekend markets to pop-up dinners, private caterers and home-based food brands, and trying them all could leave you cash-strapped and, well, fat.

Let me spare you some carbs and calories by choosing dishes truly worth trying.

Either new on the menu or served in a newly opened restaurant, these 10 dishes, all introduced last February, will satisfy appetites. 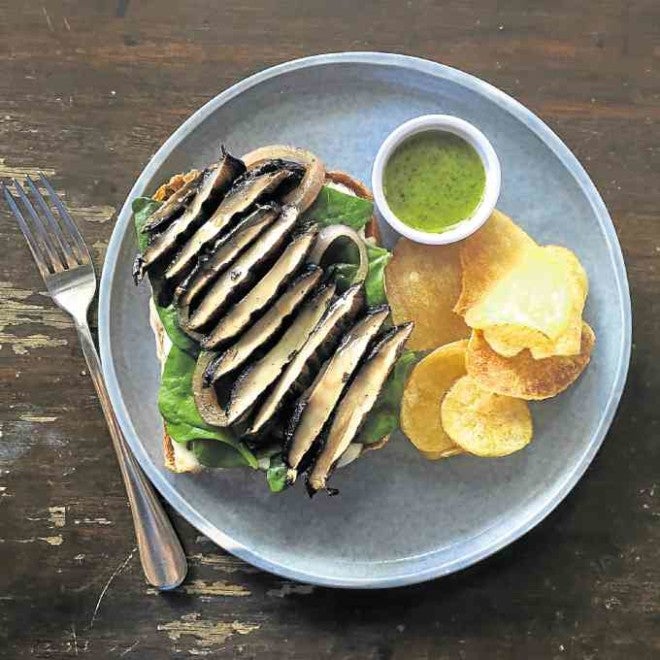 It’s available only at Refinery Rockwell and just in the morning (7-10:30 a.m.), but it’s so good that I’m sure customers will ask for it to be served in the Greenhills branch as well, and all day long.

Portobello mushrooms are grilled, sliced, topped on a croissant loaf with melted stringy cheese piled on, a sunny side up, spinach and grilled onions. Potato chips and cilantro pesto complete the hearty, satisfying and best of all, meat-free open-faced sandwich. 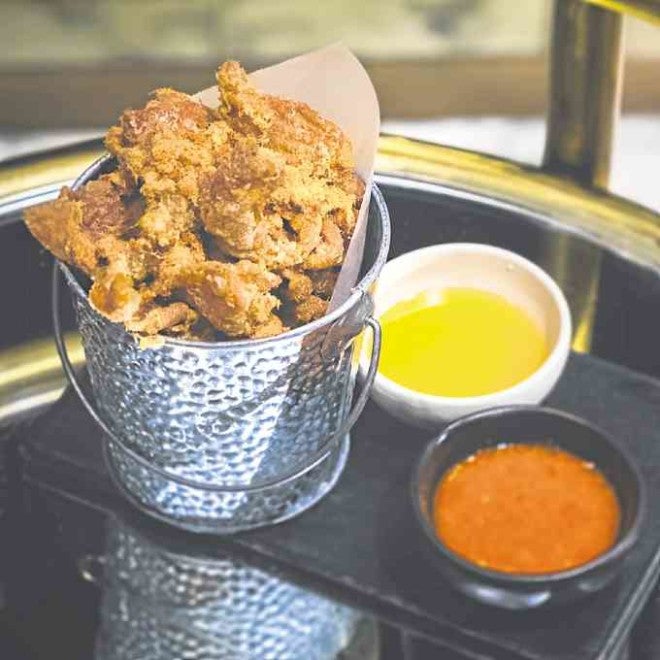 Bank Bar has just made happy hours a lot happier with its endless cocktails, which include shochu, tequila highballs and Earl Grey martinis on weekdays—and a small bucket of sinful Chicken Skin Chicharon.

It gives not only relief on a stressful work day, but also the satisfaction and comfort a crackling naturally brings.

The skin is battered and deep-fried to a crisp, seasoned for a salty umami taste, then complemented by two sauces: honey and house-made chili. 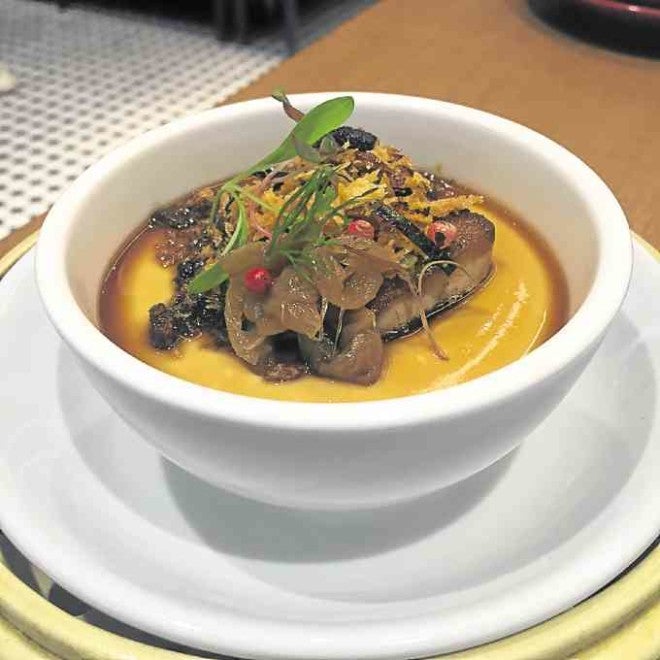 Barely a month after it opened, Ping Pong Diplomacy has already come out with a slew of new dishes, mostly braised and steamed, that are bound to lure more guests to the hip and happening restaurant. This dish is Ping Pong’s version of Chinese steamed eggs.

Served in a white bowl, the eggs are blitzed with foie gras and bamboo spirit, then steamed, resulting in a custard-like, jiggly bed that cradles a black vinegar reduction, XO crumbs, caramelized onions, pink peppercorns, and a tiny wedge of pan-seared foie gras.

It’s the affinity of egg and foie gras immortalized in one memorable dish. 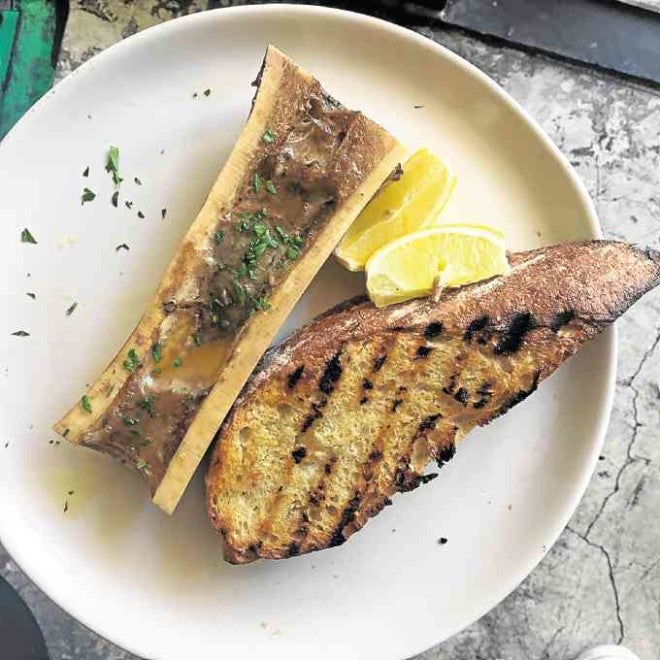 It was a toss-up between this dish and the coffee-infused bacon with pan con tomate. But this has a slight edge over the other for self-indulgent reasons.

Born out of a healthy collaboration between restaurateur Margarita Forés and master smoker Jack Ruivivar, the smoked bone marrow is roasted until it’s easy to spread and glistening.

It is served with grilled bread, lemon wedges, truffle paste and local sea salt to temper the richness of the marrow and lessen your guilty feeling as you eat it. 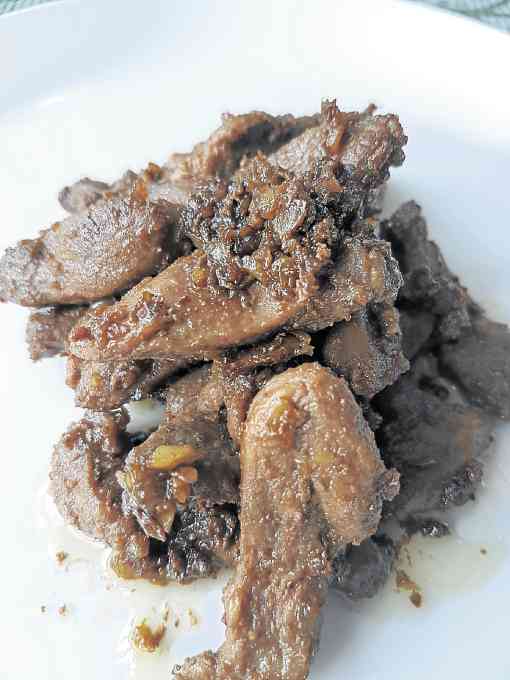 When the Angus Beef Tapa lady, Koyen Cipriano, married into a family that raises ducks in their farm in San Rafael, Bulacan, this became the wonderful result at Koyen’s Kitchenette.

Last Christmas, she began offering duck ham, a whole organically fed duck roasted and basted with a sweetish glaze. Last month, she produced the Duck Tapa, organic duck breast that has been cured in a garlicky sauce and simply fried.

Soon to come is her Duck Tocino, which certainly won’t be less gratifying. 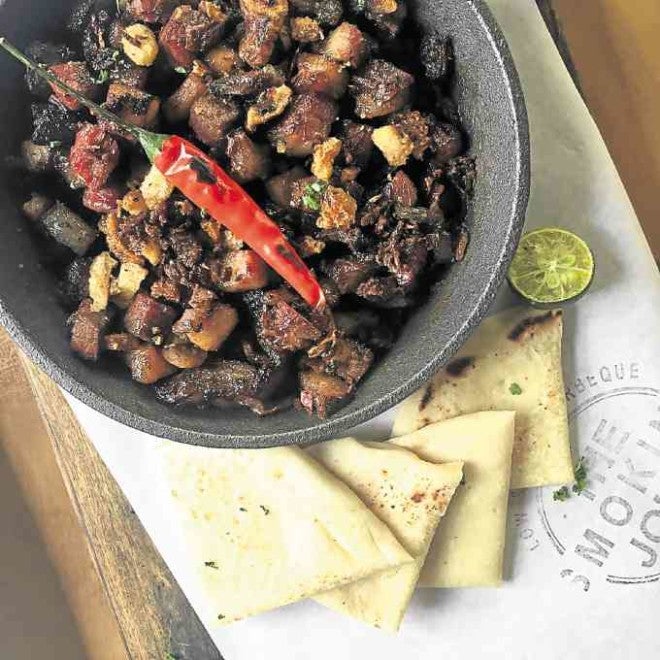 Just when you thought sisig couldn’t get any better, The Smoking Joint, the newly opened smoked meat shack comes up with a delicious mix of corned beef, pig face, chicharon and brisket that have all been smoked in-house, sautéed with onions and calamansi juice, then placed on a sizzling plate.

It is served with flat pan de sal, like pita, but don’t let this stop you from ordering a cup (or two) of rice instead as it’s the best way to enjoy such a savory treat. 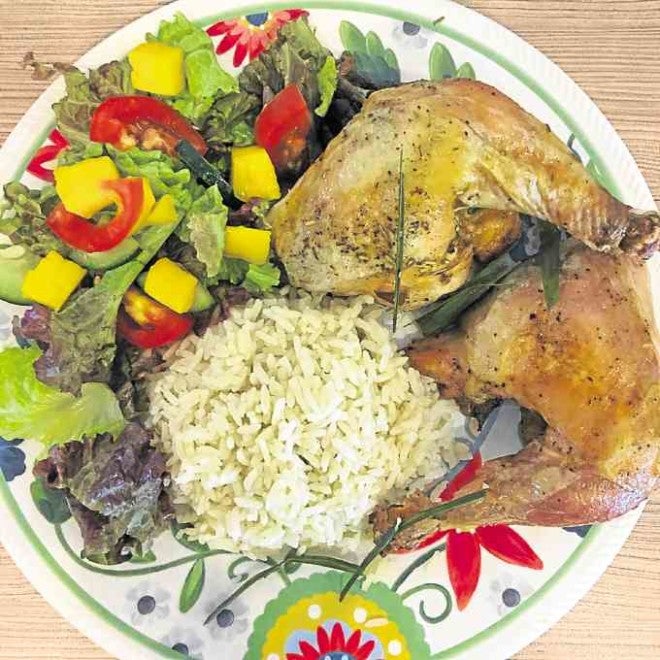 The Butchery is known for its line of artisanal sausages, but it won’t be a surprise if it gets the buzz for its latest offering—a whole organic free range chicken cooked with organic schmaltz (rendered chicken fat). Owners-slash-couple Kiko and Jessica Dy offer it in two flavors: smoked paprika and dried rosemary and lemongrass. Both are available either roasted and ready to eat, or frozen.

“We have an option of just raw ‘unmarinated’ free range chicken too, but since some of the residents don’t have enough time to marinate it, we did the work for them in flavors that are a bit neutral and more easily appreciated by many,” says Jessica. Hey Handsome has only gotten better—and a lot busier—ever since it opened for lunch. It has a menu that’s different from the dinner fare, giving frequent guests more options and more reasons to keep coming back.

The two chicken lunch dishes—one fried and the other steeped—are noteworthy but the grilled pork belly, served with nasi ulam, sambal matah and grilled cabbage, will haunt you days after you’ve had it.

The dish is big enough to share, but with something so good, why would you? 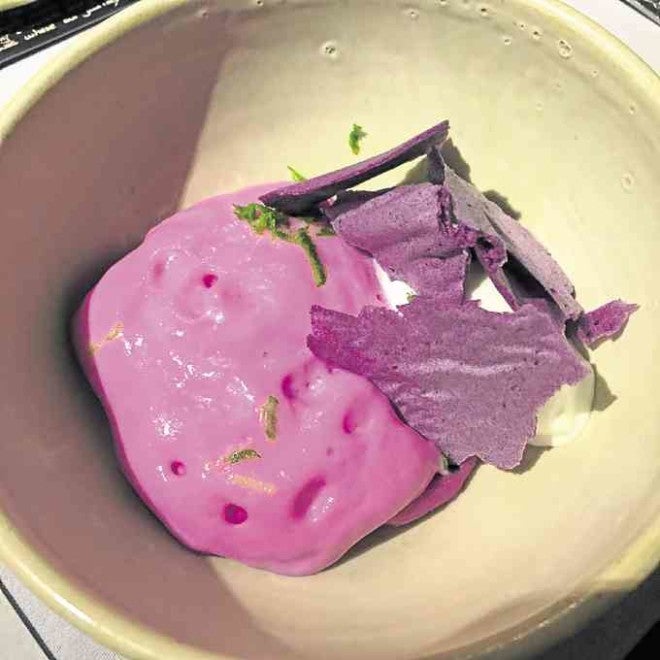 Chef Chele Gonzalez at Gallery Vask was so amazed by the purple yam Gejo Jimenez of Malipayon Farms gave him to sample, he was inspired to make a beautiful dessert out of it.

His creation is composed of ube jam, ube chips, coconut ice cream, and for added complexity and aroma, bi-asong zest.

The varying textures and shades of purple make it Instagram-worthy, while the harmonious taste makes it an easy standout in his new degustation offering. 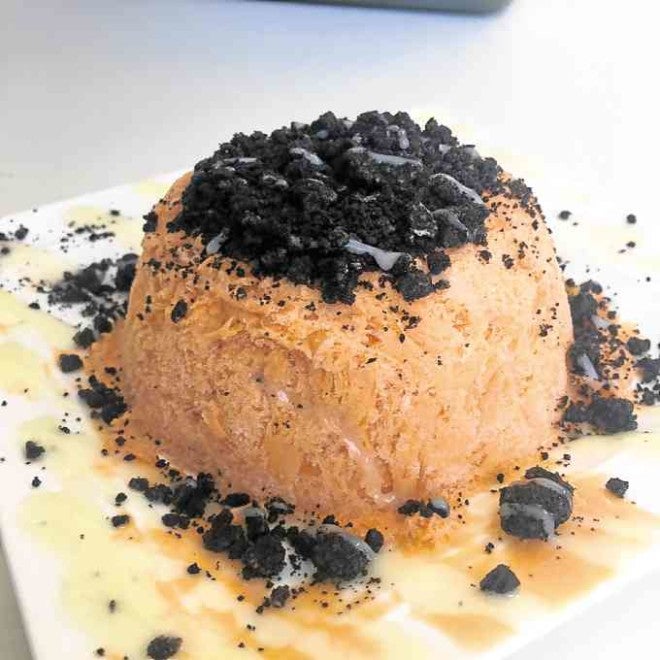 A franchise from the United States, the Vampire Penguin just opened at Ayala Malls The 30th last month, and with summer just around the corner, it couldn’t have been more timely and welcome.

Its flavored snow doesn’t melt fast and it delivers refreshment the way the halo-halo does. Its toppings range from mallows, sprinkles and fruits to the more playful egg puffs and ice cream in the snow’s core.

The Snow Tiger is a mound of Thai milk tea snow topped with crumbled Oreo and drizzled with condensed milk. This surely hits the sweet spot.