Touches of Halloween, Madonna and Metallica 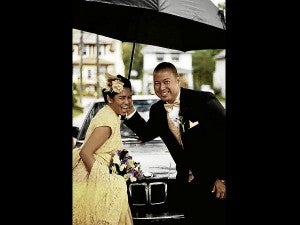 Their love story began long before they realized it.

In 2008, New York-based Vanessa Escano Reyna, an Interior Design graduate from the University of Santo Tomas, spent time hanging out with friends at a house in Morrisville, Pennsylvania. Her friend Brian Balingit was visiting from Dagupan and was staying there with his cousin. Ver didn’t have the chance to meet the owner of the house; he was working in New York.

In 2010, José S. Cancio, associate director of the Periodical & Book Association of America, invited his friend Marky Gutierrez, his wife Layley and daughter Erynn back to his house in Morrisville to hang out. “My mom had passed away from uterine cancer in 2007 and Marky had been diagnosed with cancer. After what we went through with my mom, I really made a conscious effort to get to know him and spend more time with him. He’s a great guy.”

Marky invited Ver to go with them, and that’s when Joel and Ver finally met for the first time. It was Valentine’s weekend. 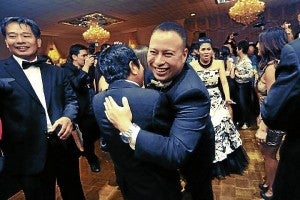 “We spent that first day just hanging out in the house and watching a marathon of ‘Cheaters,’” Joel said.

The next day, they went around Philadelphia and hit the outlets. “We started talking, and the conversation was nonstop. We were so comfortable with each other,” Ver said.

Joel felt the same way. “I just remember how incredibly comfortable I was with her and how much I enjoyed her company.”

Their friendship developed quickly. Joel’s office in New York was just two blocks away from Ver’s school, so they ended up having lunch together and hanging out often. “We would also send text messages back and forth to each other all day long,” Joel said. 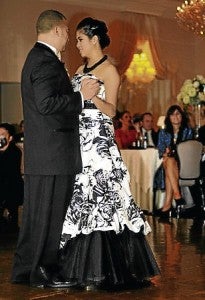 They started going to events together, to friends’ parties and exhibits.

Weeks into their friendship, Joel realized he had feelings for Ver. “She would stop by the office, I would look at her and say to myself, wow, she’s perfect, she’s beautiful, super cute, fun, caring and smart. I liked everything about her. She was so easy to talk to, everything felt natural with her. We knew the same people, we had the same interests and we have the same insane sense of humor.”

Soon they weren’t just hanging out, they were dating. Ver said, “I love that he really listens when you talk to him, like you’re the only person who exists in this world. He’s cool, he’s mature, he’s interesting, and he’s super cute and macho. He’s romantic. He treats me like a queen.”

Joel remembers the first time he realized Ver was the one. “I had to go to Canada for a business trip the day before my cousin Brian was leaving to go back home to the Philippines. I felt bad because normally I would take the day off to spend time with him. I would never want someone to be alone on the last day of their visit.

“Ver, who was then living in New York, took it upon herself to stay with him, help him pack his stuff, and keep him company until someone brought him to the airport before taking the train back to New York. She didn’t have to do it, but she wanted to. That’s Ver. And that means so much to me. That was the exact day I said to myself, ‘I am going to marry this woman!’” 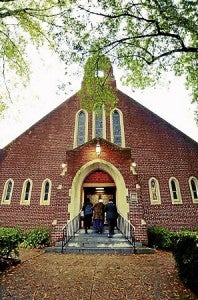 And on Thanksgiving weekend 2010, at his Aunt Oyette’s house, he proposed.

Joel said, “The most important thing in the world to me is family and friends and I wanted to do it in front of the people I care about the most.”

Ver was surprised. “I had no clue. Everyone knew, my mom knew, my family in the Philippines knew because he had asked for their blessing, too.”

Sadly, Marky, who first brought them together, passed away a few days after Thanksgiving. Joel said, “I was able to tell Layley that I had proposed to Ver and she was able to whisper it in his ear shortly before his passing.  Marky took good care of Ver while he was on this earth, and treated her like a little sister. It was prophetic in my eyes, that it seemed he could rest in peace now knowing Ver was taken care of.”

They first got married last Feb. 14, exactly a year after they first met. It was a civil wedding, small and intimate, and they celebrated with their 40 guests at an intimate luncheon.

“My dad wasn’t able to go to our civil wedding for health reasons, so we planned a church wedding later in the year.” 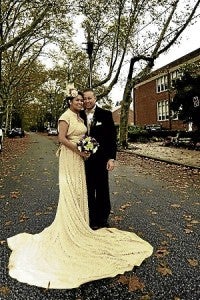 On Oct. 27, Joel and Ver were married for the second time at Holy Trinity Catholic Church in Morrisville, Pennsylvania. It was a beautiful, touching wedding, one that had guests both laughing and crying. The bride wore a beautiful gown and fascinator, both designed by her best friend and maid of honor Anna Leah Hernandez.

For the reception at Celebrations in Bensalem, Pennsylvania, as a surprise for Joel, Ver changed into a gorgeous black-and-white gown that she and her friends found off the rack the day before the wedding. “That gown made my jaw drop,” Joel said. Two hundred guests joined the celebration, with some flying in from California, Nevada, Washington, Illinois, Canada and the Philippines.

The bride and groom wanted a wedding that incorporated the things they loved the most. Joel said, “It had a sprinkle of Halloween, a dash of Tim Burton, a hint of Madonna and Metallica, and a smidge of death while being a whole lot of fun. Simple, classy and scary fun is probably the best way to describe it.”

They didn’t hire a coordinator, but planned the wedding themselves. Ver said it was Joel who was more obsessive about the little details. 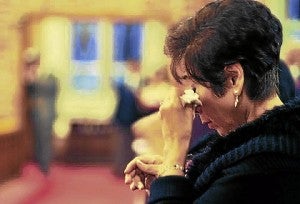 The two went online and visited flea markets to look for decorations. They found black skeleton tree branches on the street, and they spray-painted them black and Joel hung purple lights from them to give their reception venue a more Halloween-y feel. They bought a metal mailbox at a flea market and asked their friend Peter Reyes to design and decorate it so they could use it as a gift box at the wedding.

The flowers at the church, the boutonnieres and bouquets were designed by the groom’s aunt Auring Grana and Anna Leah Hernandez.

The place cards were little tombstones, and the giveaways were coffins that had been designed by Anna Leah and made by FatPapers.com, a paper company based in the Philippines. The coffins were flown to the US, filled with chocolates as a Halloween treat and Sally and Jack charms, their favorite characters from “The Nightmare Before Christmas.”

The cake was a gorgeous three-tiered mix of raspberry and pound cake created by HF Hornberger Bakery.

At the reception, a special cocktail was served in honor of the bride—the Sinfully Delightful Vertini Twiter, which was a mix of vodka, pineapple, and Chambord.

DJ Ronnie de Vera spun tunes that got everyone dancing. Musician Raimund Marasigan, a friend of the couple, performed a few songs and invited the groom to serenade the bride with their song “Just Like Heaven” by The Cure.

It was a beautiful wedding, one destined to be remembered by the guests for a long time. The groom calls it a dream come true, the bride thinks it’s an answered prayer.