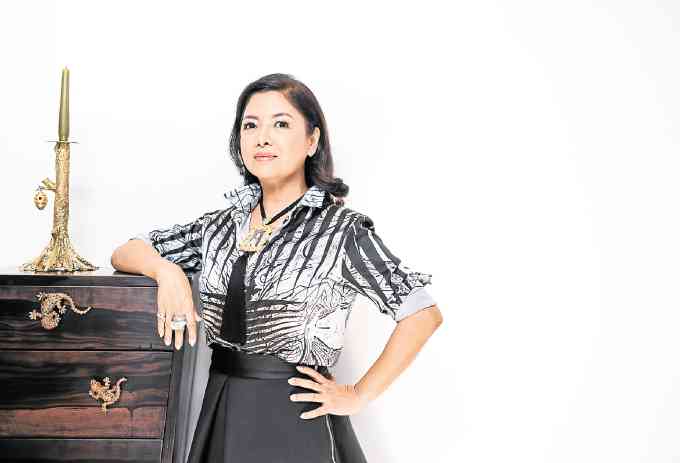 Wynn Wynn Ong with two of her designs, a candlestick holder and a bureau. PHOTOS COURTESY OFWYNNWYNNONG

That ‘certain sense of perfection’: 15 years of the art of Wynn Wynn Ong

When Wynn Wynn Ong began preparing for her upcoming retrospective exhibit, she was deluged with generous collectors proffering to loan their pieces, such as jewelry, furniture, objets d’art. The artist and designer was faced with the happy dilemma of whittling down the showpieces to a “relevant, cogent” collection that best sums up the first 15 years of her remarkable career.

But more than a celebration of her achievements, Ong wants “Wynn Wynn Ong: Redefining Boundaries” (March 9-June 15 at the Yuchengco Museum in Makati City) to be a “learning tool, to open people’s minds.”

“Someone pointed out to me that the exhibit will not be for my collectors, because my collectors will always be there,” she says. “‘You want it to be a way of mentoring,’ my friend said.”

A former teacher, Ong was reminded of the joys teaching brought her, and her rapport with students. Perhaps, she says, the exhibit could be a teaching tool for students of design. There will be intimate talks by Ong, and guided tours of the exhibit for small groups.

“We don’t want it to be a dry exhibit of beauty,” she says. “If somebody is interested in design and somebody explained to them the way the mind works, that there are no rules, that there’s nothing to fear, that they shouldn’t question themselves and that they should just do it… If we could encourage kids to do that…

“If we really want to be good at our craft regardless of what it is and not be pale imitations of others, it all boils down to masipag at matiyaga. Keep at it, to not think you’re so good you can’t learn anymore.”

Ong, who’s recuperating from an airport mishap that left her with two fractured vertebrae, is in the final stages of editing the exhibit collection. She lost five weeks in her timetable after hospitalization and subsequent physical therapy, but she’s now back on her feet, determined to be present at the unveiling on March 8.

Just like when she begins a design, the retrospective started with a concept. There’s a story and a narrative.

“Why did we start in the first place? Was there evolution, and in what sense? And what sort of evolution beyond the chronological sense? Was there growth in the technique? What were the things I learned that had a profound impact in the way that I continued? How did these change things conceptually? How did I change my philosophical approach? Was there emotional resonance? Was there an impact?”

Then, she adds with a laugh, “It seems esoteric, but that’s the way I think.”

Ong has a rich body of work, rich not so much for the sheer volume of her output—all her pieces are one-off, and most are bespoke—but for its range and distinct aesthetics.

An accidental artist, she began weaving beads and crystals with wire in 2002 as a hobby, to “fill a void”; she had stopped working and was in the early phases of empty nesting. The beauty of her work spread by word of mouth.

In the years that followed, Ong would create more jewelry, minaudieres, furniture and chandeliers, objets d’art and, just last year, a 25-piece couture collection. She has worked with metals, precious and semiprecious stones, fabrics, wood, leather.

She doesn’t take shortcuts; her lean team of artisans learns directly from her.

“To get a certain sense of perfection, you need to be on top of things,” she says.

Unlike most designers, she doesn’t do direct retail, preferring to consign select pieces with friends Chito Vijandre and Ricky Toledo of Firma. Apart from philanthropy-based collections (for Child Protection Network, Pangarap Foundation, Hands On Manila), her designs are mostly bespoke orders.

Ong is one of the most-copied designers around. Her wire jewelry, for instance, has been knocked-off “ad nauseam.” Ditto for her large-scale metal cuffs with jeweled insects. She doesn’t read magazines, so she’s mostly unaware of what others are doing; it’s often friends who tell her.

A Wynn Wynn Ong is so distinctive it’s easy to discern the copies that appear in trade shows, often years after she made them.

The designer, however, has dealt with the situation with unbelievable equanimity.

While others are still copying pieces she has done long ago, “I’ve moved on,” she says, then adds when prodded: “Crime doesn’t pay. I keep my options open.”

This year, Ong and a group of individuals like Kenneth Cobonpue, whose “names were earned the right way,” plan to resume their talks on how they could band together to protect their original works from counterfeiters.

“Some designers are very successful because they’re savvy in business,” she says. “But there are also those who endure because they nurture the work, not minding the trends, what sells, or what others are doing. The Art Fair is growing each year. That means people are understanding that in a world of mass production and robotics, originality is still sought after.”

Ong was born in Burma (now Myanmar) but was raised in Vienna and the Philippines. Her travels around the world as she was growing up informed her distinct style and aesthetics. She’s married to a Filipino investment banker with whom she has two adult children. For close to a decade, she taught literature at International School.

After this retrospective, Ong plans to go back to writing and pursue her other creative interests: designing spaces, building things, cooking.

“Normally a retrospective is once in a lifetime, so maybe this will be my only one,” she says, before adding with a knowing smile: “One never knows what the future brings, what one wants to do in life.”