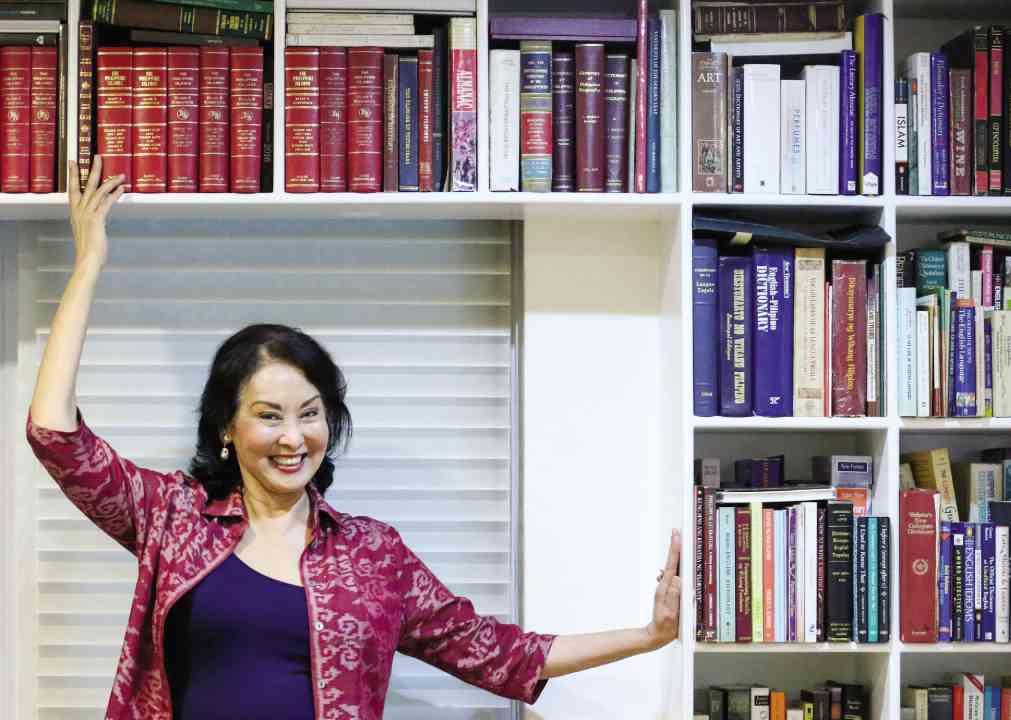 Gemma Cruz-Araneta’s library is one for the books

“I’ve never been interviewed about my books,” Gemma Cruz-Araneta says, gesturing to her tome collection in her condominium unit. “They always ask about beauty secrets.”

While many know Araneta as the first Filipino to win the Miss International title in 1964, she is also a contradiction of the notion that beauty queens don’t read.

After almost a yearlong prodding, she gave in to Lifestyle’s request to come, see her condominium and photograph its walls filled with books—a first.

Upon entering the condo, you see the books, shelved neatly for the most part, spine-out, in an almost continuous array from the entrance all the way to her bedroom. There must be close to a thousand books, many of them old.

The books dwarf the pieces of art found in the unit, save for one large piece breaking the progression of books in the living area, where one finds, looming over Araneta’s workspace, the famous portrait of her mother, the writer Carmen Guerrero Nakpil, by National Artist Vicente Manansala.

She remembers really getting into books at age five, when she was in kindergarten.

Her grandfather, the physician Alfredo Guerrero, built a house for the family in Pasay near Rizal Memorial Stadium after the second world war. After his clinic hours, Guerrero would read Spanish novels.

“One of my favorite trips was to go to the Philippine Educational Company,” she recalls. “I noticed that when we’d go to Berg’s Department Store and I’d pick a doll, my grandmother would say, ‘No, that’s too expensive.’ But my grandparents would let me buy all the books I wanted. With books, there were no limits.”

Araneta’s mother, Nakpil, is one of our most accomplished writers in English, and an avid reader.

“She knew how to select books. She bought me a book of fairy tales, and I said, I already know these fairy tales. But then she said, ‘This book is by Charles Lamb, and the style is different.’”

Araneta’s uncle was the writer and historian Leon Ma. Guerrero III, “Tito Leoni” to her. “You’d better be reading something if he catches you sitting idly. I remember when I was a little girl, I would always see him reading because we all lived together in my grandfather’s house. I can’t forget this. He would be sitting reading by himself, and then he went, ‘Hahaha!’ So I ran to my mother. Bakit ganoon si Tito Leoni, tawa siya nang tawa mag-isa?’ She said maybe the book was funny. Later in life, I would find myself doing the same thing.”

Growing up, Araneta gravitated to French novelists translated into English, such as Francois Mauriac. When her family moved to San Juan, Araneta remembers the place having books wall-to-wall. The Araneta home in Mexico is the same.

When Araneta was studying at Maryknoll, Nakpil made sure she had extra reading material “to read history in the right context.”

Nakpil moved Araneta to Maryknoll from St. Theresa’s College (STC) in grade school. “She said they speak better English there,” Araneta recalls wryly. “But I don’t think that’s the real reason. She wrote a short story about a nun who was watching her former pupil nurse her baby, but mommy was teaching at STC and got in trouble with the nuns. So was I suddenly pulled out of STC.”

Since her growing-up years, Araneta has been gathering books wherever she went. She’s been living in this unit since 1998. Eventually the books filled up the space, most of them on Philippine history and Rizaliana.

“I think I’m paying special attention to Philippine history, especially 1896-1898, extending to the Philippine-American War,” she explains. “What I consider most precious are these books about the propaganda movement, and about Rizal.”

The Rizaliana is more than just a random choice; Araneta is the great grandchild of Rizal’s sister, Doña Maria Mercado.

Her favorites have stories of their own. She carefully leafs through a 19th-century book that turns out to be the work of Gabriel Beato Francisco, the grandfather of Nakpil. “He was a kahista (typesetter) at an imprenta (printing press), but he also wrote zarzuelas, and sometimes the Americans would barge into the performances and arrest everyone because the shows were anti-American.”

Another treasure is a 1905 book chronicling the Philippine visit of the American politician William J. Bryan. “This cost me an arm and a leg because my lola’s signature is here. Apparently she was an activist in her day, but she never told me about it. A group of Filipinos wrote this memorial to him, and their objective was to tell him the real conditions in the Philippines as a consequence of the Philippine-American War.

“Then I saw this: Señorita Maria B. Francisco. That’s Lola Mary, the sister of my grandmother. The list of names of the students included my grandmother, Filomena Francisco, and Alfredo Guerrero, her future husband.”

When asked about the books that influenced her the most, she mentions the book with her lola’s signature.

Then there is “The First Filipino,” the Rizal biography by Leon Ma. Guerrero III. Then there are “A Nation Aborted: Rizal, American Hegemony, and Philippine Nationalism” by Floro C. Quibuyen, “Brains of the Nation” by Resil Mojares and “Pantikan ng Rebolusyon (g 1896)” by National Artist for Literature Virgilio S. Almario.

The last book comes as no surprise: the 1899 version of Rizal’s “Noli me Tangere.” “If it’s a work of Rizal, I prefer to read it in the original Spanish, as I compare the translations and see that a lot is lost,” she clarifies. Araneta reads fluently in Filipino, English and Spanish.

As for lighter reading, she’s read most of Gabriel Garcia Marquez in the original Spanish. “Romantic naman siya, ah,” she says with a laugh.

Her preferred reading space is deep in her bedroom, where the shelves of books meet a window above the bed, like an alcove. Araneta reads sitting up straight in bed, a habit she learned from her mother.
She is also regularly visited by her two cats, Milonga and Jarocho. “I try to read as much as I can. Sometimes in a day, I realize I didn’t have the time to read a single book. How terrible. What did I do today? I went to too many socials!”

Araneta’s role as a former Miss International was followed by stints as director of the National Museum, secretary of Tourism, member of the Board of Regents of the Pamantasan ng Lungsod ng Maynila, president of the Heritage Conservation Society of the Philippines, and author of six books.

Araneta grew up watching her mother typing away on a manual typewriter. “So I began to write my stories and read them to her,” she recalls.

Nakpil would ask Araneta to read her stories for a newspaper column called “My Humble Opinion,” when Araneta was 12.

Of her mother’s work, Araneta adores the fantastic first part of Nakpil’s autobiography, 2006’s “Myself, Elsewhere.”

“I think that was the best thing she’s ever written,” she says. “And she didn’t want to write it. My brother and I forced her to because we said, Mommy, if you don’t write about the Ermita of your children, who else can write about it?”

Becoming a writer was a much more organic event than her becoming Miss International. “It was like an impulse, you could say. At that age, it made more sense to be a writer than a beauty queen. I also wanted to be an archaeologist, because reading about these things was so exciting. My mother said, ‘How will you make a living as an archaeologist? Only princesses can do that!’”

People are surprised to find out she reads so much. Her reaction: “At last, they found out!” It’s part of a stereotype she’s defied through the years. She is immensely proud of the reading tradition in her family, which she is proud to have passed on to her children Fatima and Leon, as well as to her grandchildren.

Her library continues to grow, despite Araneta’s best efforts to prune it with regular donations to libraries and schools. “I have friends who keep giving me more and more antique books that I like and can’t refuse,” she says.

“You just accumulate. I try to control myself but there are books I feel I have to salvage.”

The library is truly a labor of love, and Gemma Cruz-Araneta stands happily in the middle of it all.