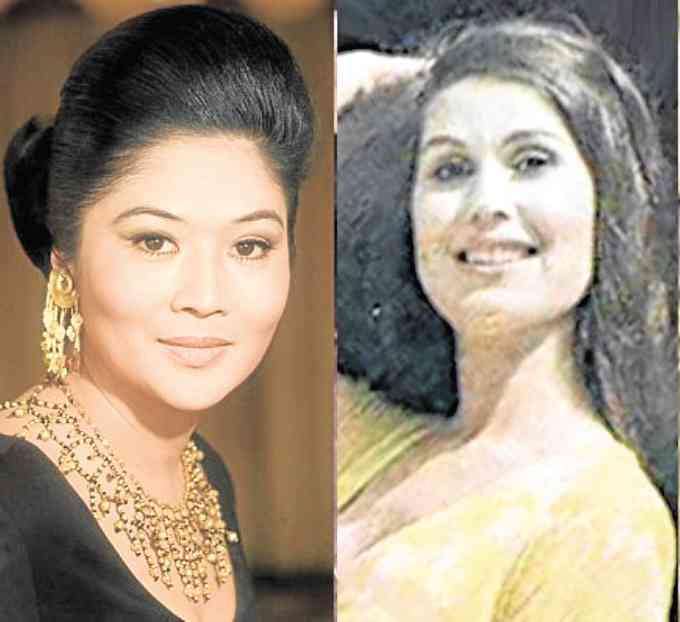 Your mantra for the week: “I am the CEO of my life, and I manage it perfectly.”

I would like to share with you the IAMIST prayer before meals. It has helped many people keep their ideal weight:

“Thank You Father for the abundance that is ours. Let the purpose of this meal be to increase health, strength, beauty, to promote eternal youth and become a perfect channel of Your expression. Every calorie we take is converted to pure energy, love, beauty, joy and a million blessings.”

Also, a little reminder for the week: You may not literally have guardian angels, but you could be one for somebody.

Now here’s the continuation of my recollection last week of my personal encounter with Ferdinand and Imelda Marcos.

One day, Dovie Beams—a Hollywood starlet who was then doing a movie in the Philippines—called up Amelita Reysio-Cruz and me to request that we help her organize a press conference where she would tell all about her affair with Marcos.

We immediately went to her Bayview Hotel room. She made us listen to various voice tapes of her conversations with the then President and, in some instances, while making love with him. She said Marcos knew she was taping all these, because he said, “You can’t use it in a court of law, anyway.”

Beams told us: “We also enjoy listening to ourselves making love.”

The conference came to pass, with Mrs. Marcos sending her own spy—a certain Father Brown whose own tape recorder failed to catch any of Beams’ revelations.

Mr. Marcos ordered all his lieutenants to make sure that his wife would not know what happened during the press con, so Mrs. Marcos searched for a copy.

Mrs. Marcos went as far as calling my father to go to Malacañang, spending four hours convincing him to make me stop writing negatively about them. My father said, “I’m sorry, Mrs. Marcos, my son has his own mind and I am not in a position to stop him from expressing his views.”

The only thing I remember my father telling me after that meeting with Mrs. Marcos was, “I never thought I would see the day where I would meet someone who can outtalk me by a mile. Boy, that First Lady can really talk.”

Mrs. Marcos also tried talking to my mother, to no avail. And then the former First Lady turned to Elvira Manahan as a last resort. One afternoon, Manahan called me up: “George, the First Lady would like to speak with you.”

And then Mrs. Marcos spoke: “I know you do not like us, but I would like to sit down with you and have coffee and a little tête-à-tête… Of course, you can continue attacking us if you so decide.”

Mrs. Marcos and I met one afternoon at the ivy-covered walls of the Manahan chateau in Forbes Park, now the home of the French ambassador. I will always remember how Mrs. Marcos walked in, wearing a leopard design chiffon blouse showing off her 22-inch waistline—corseted, of course.

In the middle of the six-hour conversation, I handed her a transcript of Beams’ press con, which pleased her no end. Mrs. Marcos went on and on till 10 p.m. and stopped only when Mr. Marcos called up and requested that we accompany the First Lady back to the palace.

While in the car, Mrs. Marcos called up her aides to prepare dinner and a movie for us to watch. Upon our arrival,
Mr. Marcos was standing at the top of the grand staircase. As we entered, Mrs. Marcos waved the tape I just gave her and said, “Darling, look what George just gave me.”

Even from a distance, I could see Mr. Marcos turning purple. I knew this could be the beginning of the end for me.

Mr. Marcos did not speak a word, like a boy caught stealing from the cookie jar. I decided to break the ice and Mrs. Marcos’ unceasing tirades by cracking knock-knock jokes, which made him smile and even laugh.

After watching a movie, “The Black Cleopatra,” Manahan whispered to me, “Imelda really likes you. I’ll bet if you ask anything from her, you are sure to get it.”

I said, “Can we please just call it a night?”

It was almost 3 a.m. As we left Malacañang that early morning, I asked Manahan’s driver, Goldilocks, to stop the car. I quickly got off and spewed my guts out at the nearest tree.

That was the lighter side of the conjugal dictatorship. In 1972, the dark moments in our history under the Marcos dictatorship began.

However, as early as 1970, when I asked someone handling Marcos’ wealth abroad who was wealthier, Marcos or Aristotle Onassis (then called the richest man in the world), he paused—until I promised that it would be off-the-record—before answering: “I will not say who is wealthier, but I can categorically say that Marcos is more liquid.”

What happened in the succeeding years was the liquidation of Philippine democracy and its economy.