The gospel of Luke 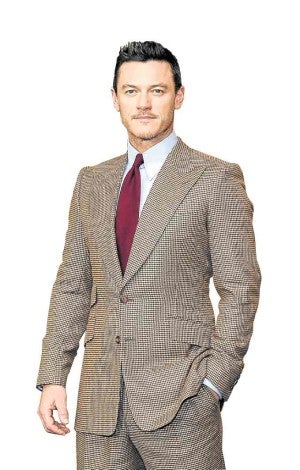 But perhaps the biggest transformation for the Welsh Evans is his act of turning a two-dimensional animated character into flesh and bone. Evans will be playing the blowhard bad guy Gaston in Disney’s upcoming live-action take on the classic 1991 animated movie musical “Beauty and the Beast.” Evans spoke to reporters over the phone from China, where he was promoting the film. And to answer the question in your head, yes, Evans will be singing his animated counterpart’s song, notably the song called, well, “Gaston.”

While this muscled, musical part may surprise many people, it shouldn’t. Evans actually began his career in entertainment as a singer. “Coming from a musical background as a singer, I thought the most rewarding thing was to be able to sing in a live action film,” he said. “I’ve been waiting for a while to do that. It’s special to be able to use my voice that way in a film.”

Evans recalls that he had to do two auditions for “Beauty and the Beast” director Bill Condon before getting the role. “It was a privilege to take on a role that is so loved,” Evans explains. “I hadn’t worked with Disney before. I wanted to do a movie that kids could see.”

The 1991 original (in which Richard White voiced the Gaston character) holds a powerful memory for Evans when he was growing up in the village of Aberbargoed in Wales. “I was 12 when it first came out,” he remembers. “I lived in a little village in Wales. My mum took me to see it. I still remember coming out of the cinema singing the songs. My mum even bought me the CD of the soundtrack.”

Evans left Aberbargoed at 17 to train in music before becoming a regular on the West End, playing Chris in “Miss Saigon” and Roger in “Rent.” In a way, Evans is a late bloomer, only getting his first film role when he was already 30. Evans has made the most of the seven years since and “Beauty and the Beast” represents a new level of prominence for him.

The shoot itself was something he enjoyed. “Every experience every day was fun. We really didn’t want it to end,” he says, adding that he also enjoyed working with the film’s Belle, Emma Watson. “She was wonderful.” Additionally, Evans says the film was really something different for him. “It’s nice to do a family film,” he admits. “It’s nice to do a light character, because I’ve done quite a lot of darker characters.”

Approaching an iconic character like Gaston wasn’t something he took for granted. “You have to accept the fact he is a flamboyant character. You can’t do the role halfway. You have to be 110 percent invested,” he says. “He’s quite an unlikeable character. My challenge was getting people to like him at the beginning and then let them see what a monster he really was later on.”

The role is also interesting in that Evans had always brought a dark intensity to his role, whether he’s playing a good guy or a bad guy. In Gaston, he gets to play someone who appears to be the former before turning out to be the latter. In the available video clips of the live-action film, Evans clearly makes a great Gaston, down to the pipes and the dancing. Evans also says he shared a great rapport with Josh Gad, who plays Gaston’s hype man Lefou.

Evans savored the entire “Beauty and the Beast” experience. In fact, he now says he would like to do more family films in the future. And he looks forward to handling more musical film roles. “This is a moment when more people are making more movie musicals,” he tells Super. “Look at how ‘La La Land’ did. They’ve really embraced the musical genre. Who knows? I would like to do more things like this.”

Evans will be kept busy by an array of upcoming film roles. Among his more unusual forthcoming roles is psychologist Dr. William Moulton Marston, the creator of the comic book heroine Wonder Woman, in “Professor Marston and the Wonder Women.” It won’t be the first time Evans would have had a hand in bringing a twodimensional character to surprising life.

That’s the biggest thing he is bringing to Gaston. “When you bring an animated character to life, as a human figure, there’s a lot you can bring to the character,” he says. “You bring layers and depth.” That’s music to everyone’s ears and calls out for everyone to witness the entirety of his latest transformation when “Beauty and the Beast” debuts on screens later this month.
Everyone will be there. After all, as the song goes, “no one says no to Gaston.” And no one says no to Luke Evans.

Disney’s “Beauty and the Beast” opens in cinemas on March 16.