When you become immune to antibiotics | Inquirer Lifestyle ❮ ❯ 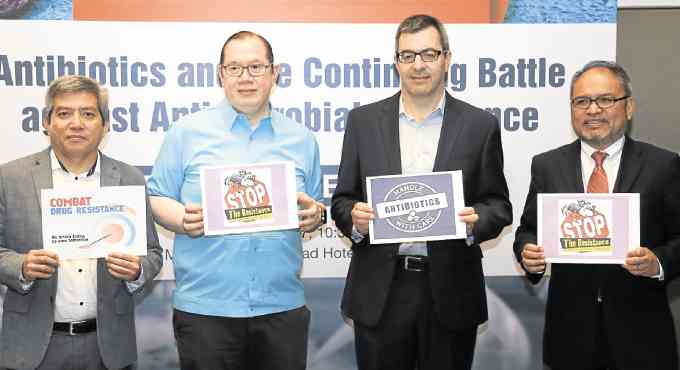 When you become immune to antibiotics

The pill you take today may be the pill that kills you tomorrow,” said Dr. Enrique “Eric” Tayag, former assistant health secretary and now director IV of the Bureau of Local Health Development, during a forum on antimicrobial resistance (AMR).

Now classified by the World Health Organization (WHO) “as one of the biggest threats to human health,” AMR is the resistance to antibiotics and other similar medications called antimicrobial agents.
Bacteria, viruses and some parasites can now stop antimicrobial medications, such as antibiotics and antivirals, from working against them. Standard treatments then become ineffective, and soon, in the event of a post-antibiotic era, even the simplest injury or a minor wound could become life-threatening.

Developed 70 years ago, antibiotics, once called the 20th century’s “wonder drugs,” is now ineffective in treating some cases of post-surgery infections, complicated urinary tract infection, complicated intra-abdominal infection, pneumonia, tuberculosis and other common diseases.
These drugs have been used for so long that infectious organisms targeted by antibiotics have instead adapted to them.

Turning to the last-resort antibiotic called carbapenem may help the patient, but at the same time, the development of carbapenem resistance in the infecting organism will also be accelerated.
Professor Tony Korman, an infectious disease specialist from Monash University in Melbourne, Australia, likens it to squeezing a balloon—as one side gets smaller, the other side gets bigger.

According to the review “Antimicrobial Resistance: Tackling a Crisis for the Health and Wealth of Nations” in 2014, there are an estimated 700,000 cases of AMR in the world, and this number is expected to go up to 10 million by 2050.

In the latest report by the Antimicrobial Resistance Program by the Department of Health (DOH) in 2015, organisms commonly involved in deadly human infections are responding less and less to antibiotics. The bacteria is becoming resilient not only to first-line antimicrobials, but also to strong last-resort carbapenems.

“This is largely caused by misuse and abuse of antibiotics, as people who don’t complete a course can contract AMR,” said Tayag.

According to a report by the Centers for Diseases Control and Prevention, each year, at least 2 million people in the US are infected with bacteria resistant to antibiotics, and at least 23,000 people die each year as a direct result of these infections.

In the Philippines, said Dr. Rontgene Solante, infectious disease specialist, in a report by DOH AMR program, a total of 50,895 people from 26 government hospitals had become resistant to antimicrobial treatments, 22 percent of them for pneumonia.

“There is an animal-to-person contamination, and person-to-person transmission. So now we’re looking at animal health, food health and human health. For those who love chicken wings, it has been determined that more residue is in the wings,” Tayag said.

Solante said animals fed with food supplement mixed with antibiotics will be carrying that drug-resistant organism, which can be spread to patients, especially those with compromised immune systems. Then it becomes a cycle.

People with compromised immune systems include those with chronic obstructive pulmonary disease, HIV, diabetes and cancer.

It is also common for many Filipinos to use leftover drugs, even expired drugs, or use antibiotics not suitable for certain infections, and so the organism becomes stronger and more resilient. People must, therefore, stop the habit of keeping antibiotics in their drug cabinets.

“Medical missions helping poor Filipinos also tend to give antibiotics as if they were vitamins. We need to issue new guidelines to medical missions to stop AMR,” Tayag said.

Tayag said there are four questions one needs to ask before popping self-prescribed antibiotics: What is wrong with me? Is this the right medicine? Is it safe? Shall I die because I’m taking this?