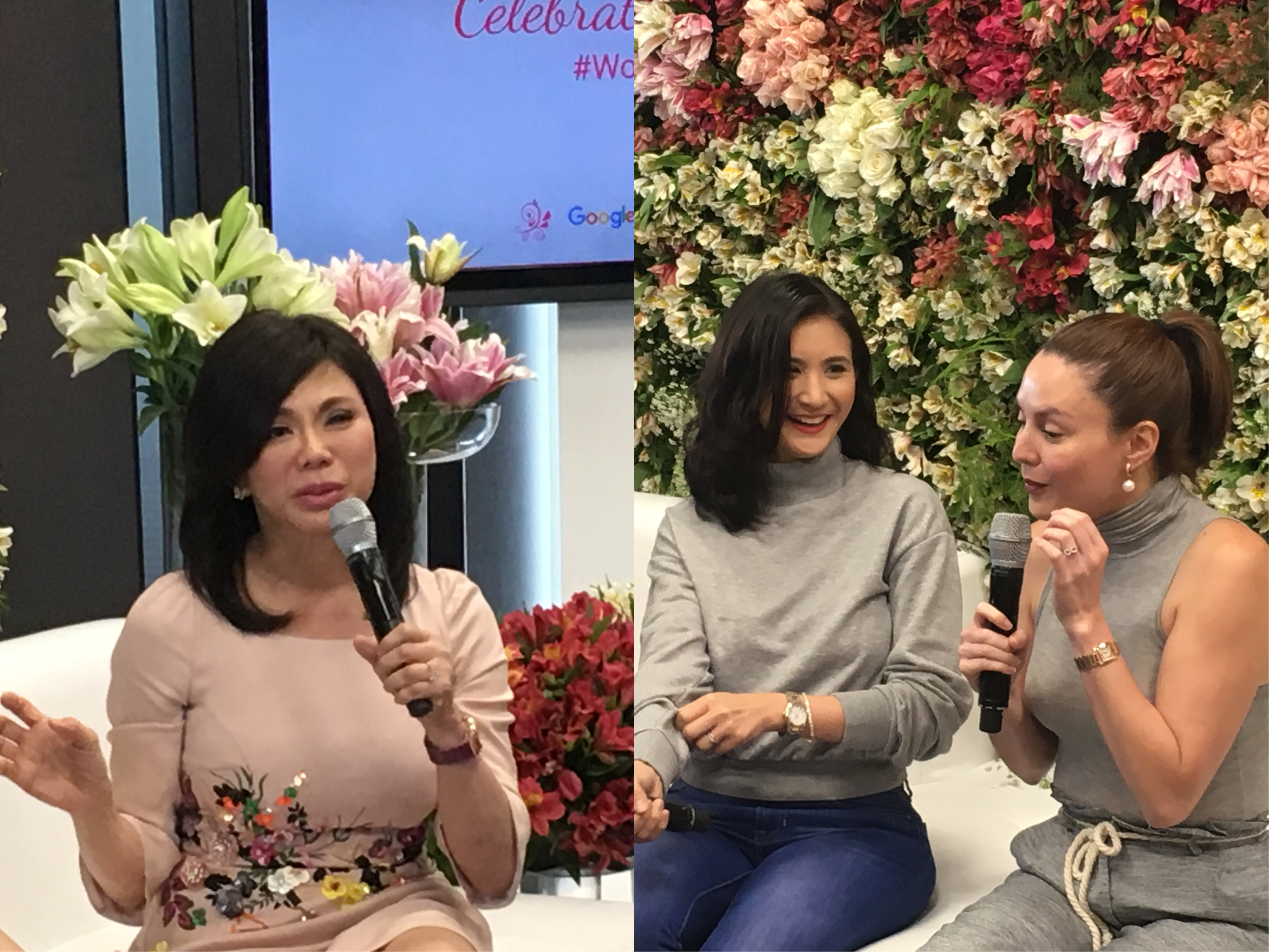 Why are you not at home taking care of your kids? Why are you being too loud and bossy? When are you going to settle down and have children of your own?

While the world, in a general sense, is becoming more tolerant in terms of gender equality, deeply rooted stereotypes and biases still persist up to this day and, especially when women are starting to carve their own names in their respective fields.

For celebrity dermatologist Dr. Vicki Belo, getting to where she is now has not been a smooth process, as she had to endure her own dose of self-doubt due to societal standards of beauty.

“As a cosmetic surgeon and as a woman, I know a lot of men cosmetic surgeons who have big tummies, and they have warts on their faces but they are not being questioned at all. But for me, one reason I got into dermatology was that I had a really really bad skin, so I figured that I would find a way to cure myself,” Belo said during the “Celebrate Women” forum at the Google Philippines headquarters in Taguig City.

“I feel, why am I held to different standards? If people were not so judgmental na, derma siya ang pangit ng mukha niya, then I wouldn’t really be maintaining myself… Then again, bakit sa men walang expectations, if they look good or not? In medical school if you are beautiful and you have a nice skin, sasabihin mag-derma ka. But nobody said that to me,” she added.

Belo, CEO of the Belo Medical Group, got her diploma in dermatology from the Institute of Dermatology in Bangkok. She also furthered her studies at the Harvard Medical School and at the University of California.

While admitting that she is in a more privileged position compared to women in other industries, third-generation entrepreneur Rosario Juan was not immune from discrimination. The owner and CEO of Commune Café in Makati said she was influenced by society not to be assertive and to just settle with what’s in front of her just because she is a woman.

“Women are not as assertive in asking for things that they think are due them especially in pay and salary. I worked in advertising for a while and I thought I got a pretty good deal for what I was doing. I was happy with it, I was perfectly satisfied, until I heard that a guy who was doing pretty much the same thing as I was doing asked for more and got it,” said Rosario, who is also a social media strategist.

“When I was younger, I was in the debate team and I would be told I was being too aggressive when I was just being assertive. My male counterparts were not told they were being aggressive,” she added.

‘You have a voice’

Dr. Rosario Lapus, president of the all-girls Miriam College, said that while the Philippines has a good number of female leaders, society still has a preconditioned idea of what a woman should or should not be. These stereotypes, she said, should be debunked especially among the youth at an early age.

“These labels are so bad and we try to be very conscious of it. We try to make girls understand that, no, you are not being bossy—you are just asserting yourself. You have to tell them what you want and what you don’t want. You have to say no. Those are the things that we try to instill to our girls—that you have a voice,” said Lapus, who earned her Master of Education from Boston College and MS in Gerontology from the University of Massachusetts.

“We are trying to show people that we are not just a girls’ school beside a boys’ school. In that case, we’re not just Miriam beside Ateneo. We are an excellent school for girls because we know what girls are capable of and they take center stage in our school, they become leaders,” she added.

Celebrity mom Rica Peralejo-Bonifacio, who has transitioned from acting to hosting and eventually writing, said being up to the task of standing up and stepping forward for less privileged women is the key to gradually burst the bubble of a patriarchal society.

“I speak side by side with my husband in a lot of events and crowds. Sometimes I can see in the faces of the men that they would rather listen to a man than me. But that’s when it comes in, I just need to speak up. Even if you would rather listen to my husband or to a man, I’m here. I was given this position. And as Sheryl Sandberg would say, lean in,” said Peralejo, who maintains a personal website and also writes for several magazine publications.

“The least I can do for them is just be out there. I’m going to lean in, I’m going to take whatever position I can to show them that women can be competent in areas that they feel like men are only competent to do that,” she said.

In the age of internet, it’s always possible for women to be both successful in their career and thriving in the household, Peralejo added.

For another celebrity mom and television host Chesca Garcia-Kramer, having children should not stop women from pursuing their passion and doing the things that they love to do.

Garcia, the wife of basketball veteran Doug Kramer and full-time mother to three kids, is also a social media personality and YouTube creator behind the hit “Team Kramer” videos.

“I only found my niche in life when I became a mom. True, I’m an actress and I’m also a host. But for me I found really my potential and what I can do when I became a mother,” Garcia said. “For those moms who think that ‘it’s the end of my life, I don’t have time,’ I always say that when I became a mom, I found who I am, and because of that I was able to do all of these things. Motherhood never ended anything for me. It started everything for me.”

She added: “I was never put in a position where I was told that I’m a woman I can’t do anything. I’m placed in a position wherein, when I walk in there, I don’t think that I’m just a woman. I’m Francheska, I’m walking there equipped, I know what I’m gonna be doing, I’m prepared.”

Aside from her online activities, Garcia also designs swimsuits for moms, shoes, and beddings. She will also be launching a series of children’s book titled “Team Kramer Values and Healthy Habits.”

Talking about her husband Hayden Kho, Belo said women can help men to be more accepting of women’s evolving and flexible roles by engaging them more in the household.

“He’s really the hands-on dad. He contributes a lot. He’s the one who cleans. Although I’m the woman, I’m the male energy. He loves taking care of Scarlett. So if you see social media posts of Scarlett, you’ll almost always see it’s her dad who does everything,” she said.

“The secret here is to get men involved. They miss a lot by not being there for their kids. We’ve all taken over their space and yet they do not have a place in the house. It’s up to us to bring them up to the task, let’s just expose them,” Belo added.

‘Look at people as people’

For women are striving to leave their mark in a “man’s world” and who feel that they cannot make it, these female trailblazers have this to say:

Belo: “Celebrate life. The thing that got me to where I am is I tried everything, from having a  successful clinic to shopping everything I wanted to… and relationships of course. In the end, relationships are really what count… There are two ways to get to God—one you’re at the lowest point of your life, or a really good place where you’; You’ve gotten almost everything but in the end it’s still empty. Celebrate life with someone because it’s so meaningless to have one hand clapping.”

Peralejo: “Find your calling. Don’t find a job, don’t find a profession. If you want to earn money, that’s good… but it’s not gonna be an easy life. I think if we are being challenged, we think that we are in a wrong place. But actually challenges are very much a part of life. It’s not necessarily wrong that it’s challenging, but we must know where we are called because unless we know that, we’re not gonna hold on to something and stick through it.”

Juan:” I think it’s a journey to know what your passion is, what your calling is. It doesn’t happen overnight. So what I always tell people is you never really know until you try. So if you wake up one day and feel that this might be just it, then try. If it works out and it does make you happy, good job. If you fail, try another thing. In line with International Women’s Day, I’m still waiting for the day, to make ‘babae kasi’ positive. ‘Magaling ‘yan, babae kasi.’”

Garcia-Kramer: “Filipino women are known to being nurturing , loving and dedicated in raising their children and being a good homemaker. But at the same time I think what makes Filipino women very empowering is that she knows her priorities and she can follow her dreams and do whatever she wants to do whether at the comfort of her own home or somewhere. I think it’s just to look at people as people, not as men and as women—looking at that person and say, ‘I know what you can offer and what you can bring to the table and I appreciate your talent.’ We should all look at each other for who we are and what we can do and what we can offer.”