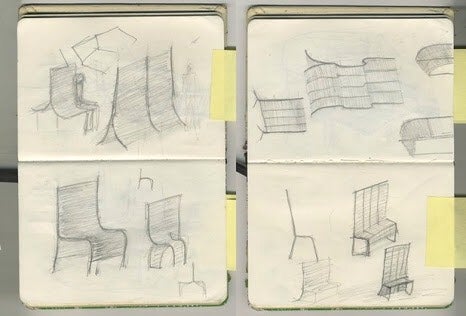 Lasco's sketches for his Bench Screen. It was inspired by the screens sold on the streets.

SINGAPORE–Japanese designer Hiroki Sakamoto bagged the grand prize at this year’s Furniture Design Award for his miniature chairs inspired by a traditional Japanese dessert that dates back to the 17th century.

The Yokan Chair takes its name from the delicately tinted bars of sweet bean paste made from azuki beans, sugar and agar-agar.

Sakamoto was one of the 12 finalists weeded out from over 200 participants in this year’s competition. The panel of judges awarded him the grand prize of S$20,000 and a 12 sq m space at next year’s International Furniture Fair Singapore (IFFS) for his whimsical design.

Eight of the other finalists also came up with chairs that followed a theme that championed resourcefulness and sustainability. One was made of three U-shaped pieces of laminated wood one could connect with magnets to form a stool. Another used a single-layered felt shell reinforced with a steel frame that could easily be assembled into an armchair or rolled up for shipment.

Jun Paul Lasco, who hails from Bohol but works in Cebu, was one of this year’s finalists. His Bench Screen is a high-backed bench that has a double purpose: it serves as seating and as a partition or divider.

“I was inspired by the inexpensive reed screens sold by ambulant vendors,” Lasco told Inquirer Lifestyle. “Two Christmases ago, my mother came home with several of these screens. She said she had seen an old woman selling them and decided to buy all her wares.”

The elderly woman was so thankful because she didn’t have to go around Bohol trying to sell the screens. She was able to go home to her family with money to spend for Noche Buena.

“That’s where the idea for the Bench Screen came from. I wanted to elevate the look by using sturdier materials, but still keeping its screen function,” Lasco said.

By using rattan in a gradient pattern attached to a lightweight steel frame, he was able to come up with seating that also provided a modicum of privacy.

“It’s still very new, but I can imagine it being used in airports, banks and restaurants. Clients can also have the steel frame painted in their preferred color.”

The soft-spoken designer said that he has been working for industrial designer Kenneth Cobonpue for two years now.

“I took a week off so I could attend this year’s IFFS. The Bench Screen may look simple, but I can also come up with elaborate designs should the need arise.”

The Furniture Design Award, a project of SingaPlural, is an annual furniture design competition organized by the Singapore Furniture Industries Council. The award aims to uncover budding design talents and be a reputable showcase for the unique creations of the world’s best creative minds.

The designs of all 12 finalists are on display at Hall 6 of the Singapore Expo until March 12.