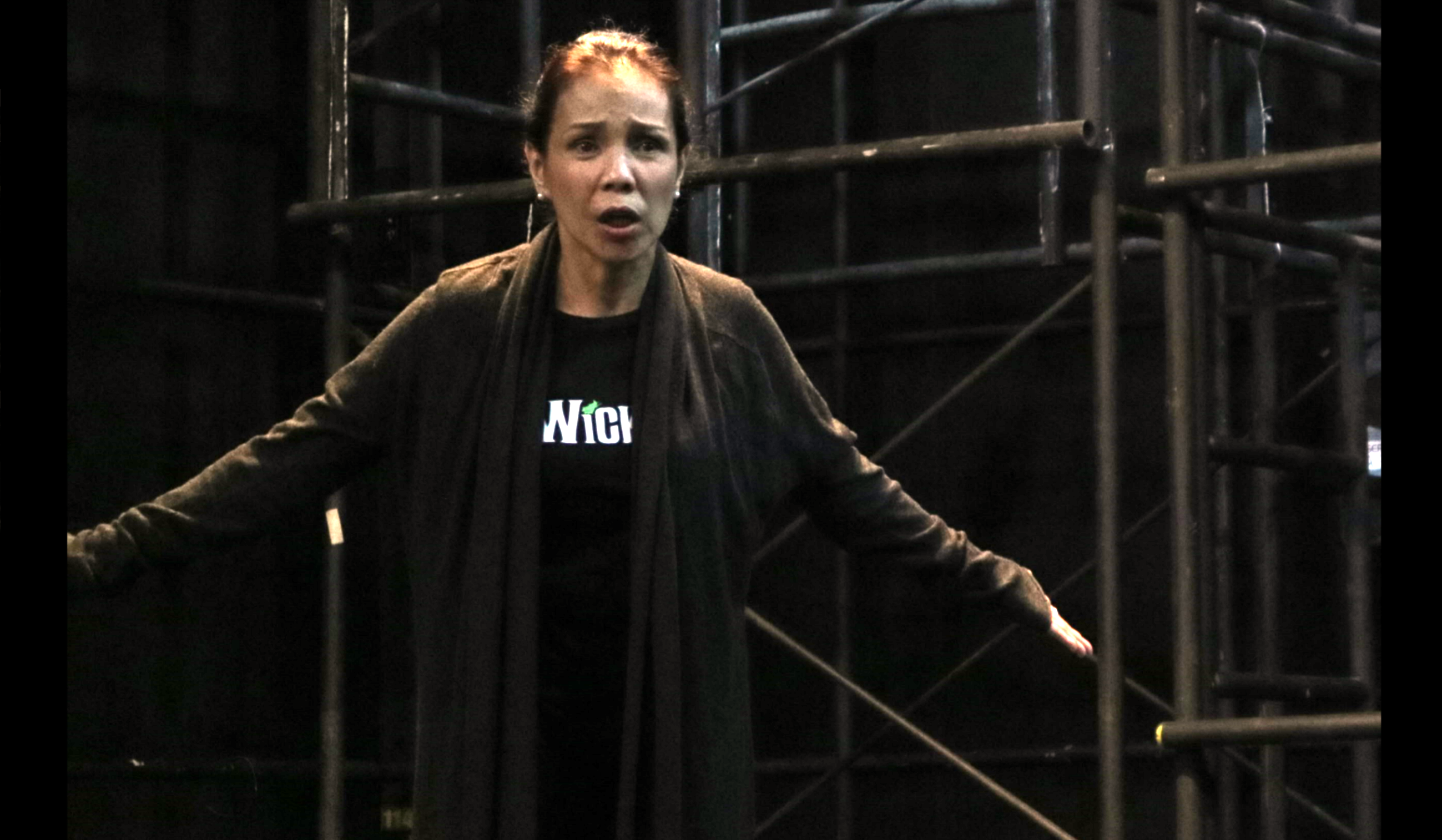 Irma Adlawan: “Working with Nonon is always a joy.” —PHOTOS COURTESY OF DLS-CSB

‘Makbet’ by way of Nonon Padilla this way comes

There’s plenty of love amidst the murder and mayhem in William Shakespeare’s “Macbeth,” a play about an army general prophesied to ascend the throne and, upon the prodding of his wife, kills the people in his way to speed up the process.

The love of theater artists who are collaborating with each other once again, that is.

Nonon Padilla, Irma Adlawan and George de Jesus III all used to be part of Tanghalang Pilipino (TP). Padilla was founding artistic director and the latter two were resident actors. Gino Gonzales designed sets and costumes for TP, while Shoko Matsumoto designed lighting for the group.

The quintet is reuniting for a staging of Rolando Tinio’s translation of the play, presented by De La Salle-College of Saint Benilde’s Arts and Culture Cluster.

De Jesus is playing the titular character, with Adlawan tackling Lady Macbeth; students and faculty fill the rest of the cast.

“Superficially, ‘Macbeth’ may be about serial murders and obsessions with bloodlines,” says Padilla. “But on reflection, ‘Macbeth’ isn’t just about tyranny and ambition. Its central drama is the murder of the soul. It’s the reenactment of the fall of Man from the Garden of Eden. The tragedy played out is Macbeth’s discovery of the impossibility of eliminating the spirit or the soul.”

Audiences will just have to watch to see how Padilla will execute his directorial approach. As for the two actors and the two designers working with him, their common refrain is that crafting a new production with Padilla doesn’t require much explaining.

“We don’t need to talk too much. Just a few words and we understand each other. We’re like a family now,” says Matsumoto, who now shuttles back and forth between Manila and Taipei. She recently designed the lights for “Next to Normal” for Atlantis Productions.

“Working with Nonon is always a joy,” says Adlawan. “I have learned a lot from this man. He is partly responsible for what I am as an actress.”

She expresses joy at working with De Jesus again, partly because they didn’t have too many partnered scenes back when they were with TP. “I’ve known George since the ’90s. I’m happy to be working with someone who knows the ‘language’ Nonon uses.”

De Jesus seconds the motion. “Since we were both trained by him, his directions come at us fluidly. There’s an inherent understanding and an energy that’s hard to explain,” he says.

“It’s always a thrill to work with Nonon because he makes his actors’ brains go on overdrive. It’s so exciting to see his vision and work come together and to realize what you can do to contribute to that vision.

“His direction is quite challenging, as he asked us to look at the spiritual nature of Macbeth’s tragedy, something that goes deeper than the usual ruthless ambition that Macbeth is known for.

“I just hope I can pull it off,” he adds, laughing.—CONTRIBUTED