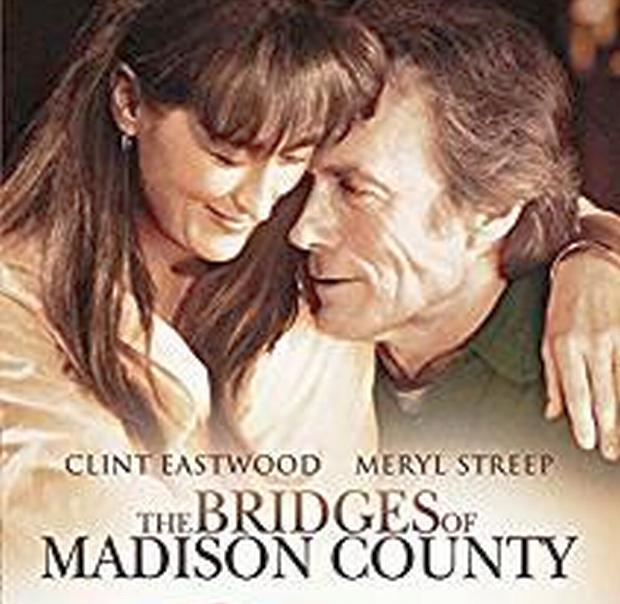 Image from the poster of the movie starring Clint Eastwood and Meryll Streep.

NEW YORK — Robert James Waller, whose best-selling, bittersweet 1992 romance novel “The Bridges of Madison County” was turned into a movie starring Meryl Streep and Clint Eastwood and later into a soaring Broadway musical, has died in Texas, according to a longtime friend. He was 77.

Scott Cawelti, of Cedar Falls, Iowa, told The Associated Press that Weller died early Friday at his home in Fredericksburg, Texas. He had been fighting multiple myeloma, a form of cancer.

In “Bridges,” which Waller famously wrote in 11 days, the roving National Geographic photographer Robert Kincaid spends four days romancing Francesca Johnson, a war bride from Italy married to a no-nonsense Iowa farmer. One famous line from the book reads: “The old dreams were good dreams; they didn’t work out but I’m glad I had them.”

Waller’s novel reached No. 1 on The New York Times best-seller list and stayed on it for over three years, longer than any work of fiction since “The Robe,” a novel about Jesus’ crucifixion published in the early 1950s. The Eastwood-directed 1995 movie grossed $182 million worldwide.

Many critics made fun of “Bridges,” calling it sappy and cliche-ridden. The Independent newspaper said of the central romantic pair “it is hard to believe in, or to like, either of them.” (Publishers Weekly was more charitable, calling the book, “quietly powerful and thoroughly credible.”)

The New York Times was dismissive: “Waller depicts their mating dance in plodding detail, but he fails to develop them as believable characters,” reviewer Eils Lotozo wrote. “Instead, we get a lot of quasi-mystical business about the shaman-like photographer who overwhelms the shy, bookish Francesca with ’his sheer emotional and physical power.’”

Readers, however, bought more than 12 million copies in 40 languages. “Bridges” turned the unknown writer into a multimillionaire and made Madison County, Iowa, an international tourist attraction.

“I really do have a small ego,” Waller told The New York Times in 2002. “I am open to rational discussion. If you don’t like the book and can say why, I am willing to listen. But the criticism turned to nastiness. … I was stunned.”

The novel prompted couples across the world to marry on Madison County’s covered bridges. Around the town of Winterset, population 4,200, tourists arrived by the busloads, buying “Bridges” T-shirts, perfume and postcards. Thousands signed in at the Chamber of Commerce office, where they could use restrooms marked “Roberts” and “Francescas.”

After the novel’s success, Weller left Iowa, where he had grown up, and moved to a ranch in Alpine, Texas, 50 miles from the nearest town. He also divorced his wife of 36 years, Georgia, with whom he had a daughter, and found a new partner in Linda Bow, who worked as a landscaper.

Weller grew up in Rockford, Iowa, and he was educated at the University of Northern Iowa and Indiana University, where he received his doctorate. He taught management, economics, and applied mathematics at the University of Northern Iowa from 1968 to 1991. Waller’s seven books include “Slow Waltz in Cedar Bend,” which unseated “Bridges” on the best-seller list, “Border Music,” “Puerto Vallarta Squeeze” and “A Thousand County Roads: An Epilogue to The Bridges of Madison County.”

The last, a sequel to his monster hit, was prompted by thousands of letters from people who wanted to know more about the characters. “Finally, I got curious and decided I’d find out — I wrote the book,” he told the AP in 2002.

A musical was made of “The Bridges of Madison County” in 2014 starring Kelli O’Hara and Steven Pasquale with a score by Jason Robert Brown, but it closed after just 137 performances on Broadway. A national tour starring Elizabeth Stanley kicked off in 2015.  –Mark Kennedy