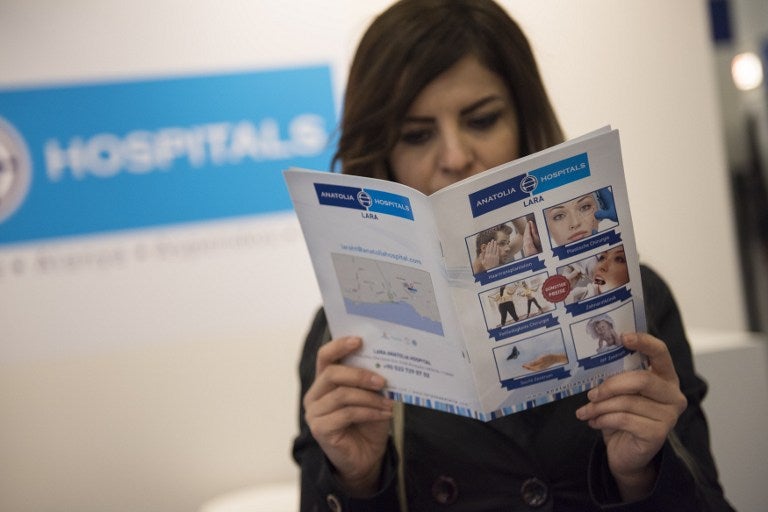 This file photo taken on March 08, 2017 shows a hostess posing with information material for a hospital in Turkey at a section for medical tourism at the International Tourism Trade Fair (ITB) on March 8, 2017 in Berlin. / AFP PHOTO / STEFFI LOOS

Medical tourism has grown into a healthy travel sector as people shop beyond their borders for everything from dental work to plastic surgery, say experts at Berlin’s ITB travel fair.

This year is the first that the global tourism show has set aside space in the halls of the German capital’s congress centre for the emerging sector.

Health tourism is already worth billions of dollars per year and set to grow at up to 25 percent annually over the coming decade, according to a recent study by Visa and Oxford Economics.

Thanks to the internet, a growing middle class, often from countries without high-quality healthcare, “know that there are treatments out there for them,” said Julie Munro, president of the Medical Travel Quality Alliance, which produces a ranking of the 10 best hospitals for medical tourists.

But medical tourism is not limited to a few countries, nor to people from wealthier nations travelling to less pricey ones.

Countries like the United States, Turkey, Thailand, Singapore, Spain and Germany see both inward and outward flows, as patients dodge waiting lists or hunt for care that is either unavailable or too expensive in their own country.

“For example, you have a lot of Germans going to Poland or Croatia doing dental care because it is cheaper.

“But also a lot of Russians and Arabians coming to Germany because we have high-quality hospitals and care they don’t have in their countries.”

“We work with travel agencies and offer complete packages” including pick-up from airports, said Jacco Vroegop, head of clinics in Amsterdam and Frankfurt for ophthalmology network Worldeye.

Launched in Turkey before expanding into Germany and, in the future, into the Netherlands, the group says it treats around 50,000 foreign patients from 107 countries each year.

But Munro warns of a “growing problem” that patients travelling abroad are particularly at risk of “over-diagnosis” aimed at swelling their bills.

Medical tourists are also often concerned with security in destination countries. Worldeye, for example, expects more clients to opt for its sites in Amsterdam or Frankfurt than for Istanbul or Antalya as Turkey struggles with political tensions.

Dubai has made big bets on medical tourism since 2012, concentrating on seven specialities where the city has the capacity take on extra patients without affecting care for locals.

Some 42 treatment centres have been singled out for their focus on taking in foreign patients.

“We launched a strategy, a brand, Dubai Health Experience, and a website for all tourists to be able to access official information on where they can be treated, and a mobile app,” said Linda Abdulla Ali, a consultant with the city’s Medical Tourism Council.

In 2015, 298,000 people travelled to the biggest city in the United Arab Emirates for care, 30 percent of them from other Arab nations.

“Our objective is to attract half a million medical tourists by 2020,” she said.

Other countries, such as Portugal, are just beginning to dip their toes into the market.

“We’re still preparing our strategy, starting the promotion all over the world,” said Joaquim Cunha of Health Cluster Portugal.

The group plans an offer based on “a modern park of private hospitals,” Cunha said.

“We don’t think that for medical tourism purposes we can use the public hospitals,” he added.