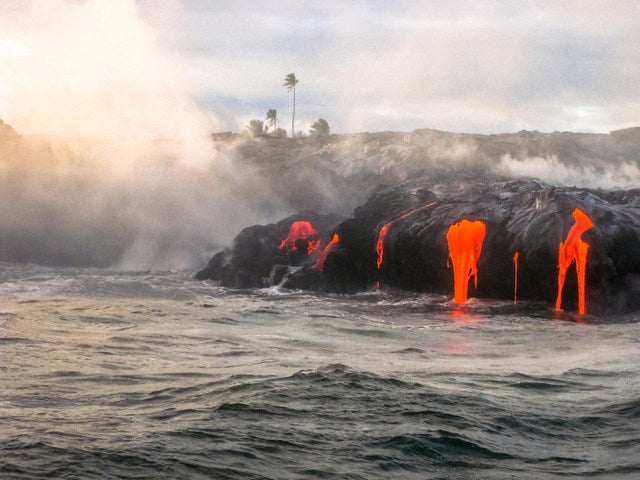 For thrill-seekers and nature lovers, there’s a luxury travel package that takes the concept of volcano tourism to new heights.

Billed as an overnight pop-up, the once-in-a-lifetime experience created by the luxury Four Seasons hotel brand starts with a helicopter tour of Hawaii’s stunning beaches, waterfalls and alleys.

The tour is led by leading volcanologists, who provide insight into some of the most dramatic natural phenomenons on earth, while the itinerary also features a guided bike tour which stops at the point where lava flow meets the ocean at Kamokuna, a phenomenon that involves more than one million gallons of lava entering the ocean every hour.

After checking in to their secluded cottage, set within a 1,000-year-old Hawaiian rainforest and transformed into a luxurious cottage, guests will be served an intimate dinner and private Hawaiian dance performance.

The evening ends with an exclusive, adrenaline-pumping tour of one of the world’s most active volcanoes, the Kilauea Caldera, from the ground.

The next day, guests will undertake another helicopter tour that lands at a secluded beach on the southern coast for a private swim, before returning to the home base, the Four Seasons Resort Hualalai.

The price tag for a once-in-a-lifetime experience? The 27-hour, Ultimate Pop-Up Volcano Adventure is available for up to four people at $39,500 (nearly P2 million). JB