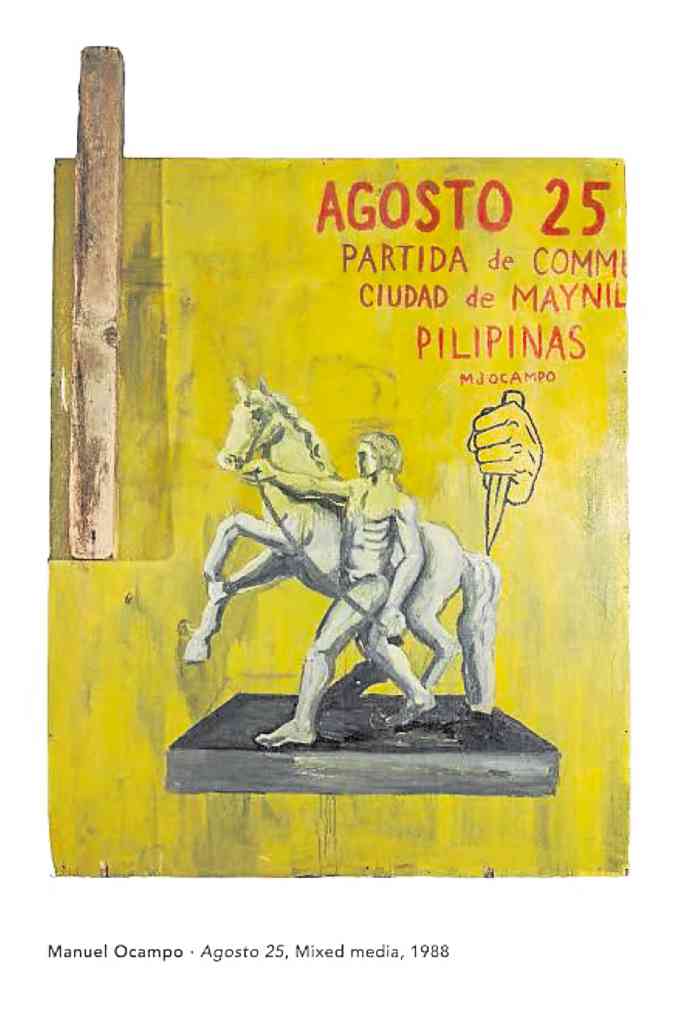 If contemporary art were to be defined as the territory of the young, emergent and experimental, then it would be inappropriate to classify as such the works of Manuel Ocampo, whose large canvases of laboriously loaded symbolism abound in an exhibition at Archivo 1984 Gallery in Makati.

This painter is certainly no new kid on the block and has been around for a long time, nurtured early in the ruckus of California in the late 1980s.

Many in the international art scene know him for his ascent to notoriety through participation in seminal exhibitions in 1992, namely “Helter Skelter: L.A. Art in the 1990s,” capped by the infamous exclusion of four of his canvases at “Dokumenta 9” in Germany.

By 2003, Ocampo had already begun spreading his audacious subjects and maverick personality through collaborative and fun exhibitions with like-minded artists in Manila. His inclination to support his peers resulted in the curation of shows abroad representing a slice of youthful art from the capital and the opening of his gallery focusing on prints, the Department of Avant Garde Clichés, in 2011. His art space was one among the few that provided global reach to local audiences, however short-lived.

Nowadays Ocampo is busier than ever in Europe, preparing, among other projects, for his participation in the upcoming Venice Biennale in May.

When the exhibit does open, it will be a welcome surprise if he will again inadvertently call attention as much as he had in his period of visual critiques in the early ’90s. Upon relocating to Manila, though, it was the painter himself who announced he was tired of infusing allegory and metaphor in his paintings, moving onto gestural renditions of the cute.

His third invitation to the Venice Biennale through the Philippine Pavilion will reiterate his efforts in holding up the banner for Philippine contemporary art.

Not many of Ocampo’s early works have been put on auction. It would be safe to say that his initial collectors have been slow in getting over him. But even if he has been prolific locally for over a decade, galleries, much less museums, have not ventured into presenting a domestic view of his early works.

If your tolerance for the blasphemous (as described once by Alice Guillermo) and the unserious is high, if you care to see what the commotion around this bad-ass artist was about, rush to see this first ever major offering of Ocampo’s early works to witness what the artist simply got bored of doing while doing something else. —SANDRA PALOMAR QUAN