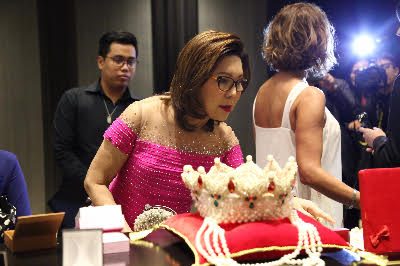 Teo and the Department of Tourism team conducted the meetings following the conclusion last Sunday of the International Tourismus Borse (ITB), the world’s biggest tourism trade fair, in the German capital Berlin.

In a statement, Teo said she sat down with legislator Jurgen Klimke, and exchanged views on the promotion of tourism between the Philippines and Germany, including exchange programs for Filipino and German students and professionals.

Klimke is a current member of the committees on foreign affairs and of economic cooperation and development of the Bundestag, or the lower house of the German parliament. A former journalist, Klimke is a member of the ruling Christian Democratic Union party and his regional focus is on South and Southeast Asia.

Teo told Panz that among the DOT priorities was selling the Philippines as a culinary and cruising destination.

“The Philippines remains to be at the forefront of promoting its gastronomy tourism by hosting big MICE (meetings, incentives, conferences and exhibitions) events and the single most important culinary tradition is Madrid Fusion Manila, while developing cruise as niche markets,” Teo added.

The tourism chief personally committed to arrange meetings between the DOT-partner universities and institutions, and other government officials and their German counterparts, inviting both Klimke and Panz to visit the Philippines.

The Secretary said her meeting in Germany was also part the Philippine government’s commitment to advance bilateral relations with the Central European country in all aspects, including political dialogues, economic cooperation, and people-to-people exchanges.

The airline expressed its interest in launching flights from Zurich to either Manila or Cebu.

“The DOT is keen on increasing air access between European markets and the Philippines. Your initiative is very timely, considering that PHL is expanding its airport infrastructure, as well as route development to key tourist markets,” Teo said.

Teo also also met with officials of DERTouristik and FTI Touristik AG, two of the largest tour operators in Germany. She requested the operators to expand their tour packages to include other destinations such as Vigan, Siquijor and Balesin, to name a few.

The DOT chief, a former travel and tour operator herself, said she assured the operators that the safety of local and foreign visitors, especially Europeans, is a primordial concern of the Philippine government.

“The Duterte administration has aggressively undertaken various steps to ensure the safety of tourists visiting the Philippines. Together, military and police personnel have stepped up security and safe movement of local and foreign tourists throughout the country,” Teo stressed.

According to DOT undersecretary for administration and special concerns Rolando Cañizal, who accompanied Teo in Berlin, European markets posted top growth rates in tourism arrivals to the Philippines last year.

On the whole, there were 629, 474 European tourists who visited the Philippines in 2016 with the United Kingdom as the biggest source European market contributing 173, 299 guests. CBB