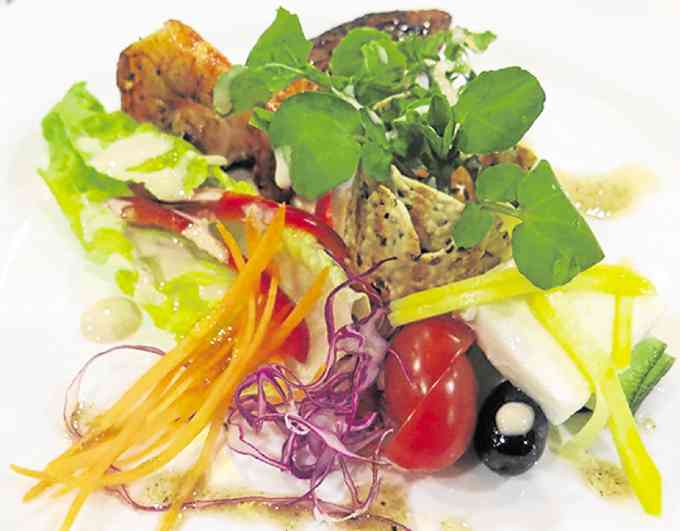 Mitos Benitez Yñiguez is a whirlwind disguised as a person. When we met in October last year, she said she was opening a café with a fantastic view. I had thought it would take some time for it to push through. But she opened Café Adriana at Outlook Ridge in Baguio a month after.

Yes, the view is fantastic on the wide deck, the plastic see-through railing providing an unhampered view of mountain ranges beyond. But after soaking in the cool air and sunshine, one’s view of the food proves to be much more compelling.

While the name of the restaurant includes the phrase “by Hill Station” to let people know that this place is also run by the same people, it has a personality all its own. Mitos said the menu would be more Spanish, and so it has several choices of paella and cocido.

Salads are expected in a Baguio restaurant, but none would be as colorful or delightful as those at Café Adriana’s. We had thinly sliced roast beef with a siding of cucumber pickles. And we didn’t know whether our light-headedness was because of the high altitude, or the mojito made with cucumber and mint.

The resto has wide windows, a chandelier, long tables. Mitos opened the place much earlier because she said the time was right, even without the windows and curtains installed. She did make sure to do the right thing by having a cañao—the Cordillera ritual killing of a pig within the premises—to pray for the success of the venture.

She also held that ritual for all her ventures, including a bistro at Camp John Hay—which should probably make her an honorary Cordillera native. And she has the requisite tattoo on her arm to prove it.

On this particular day, the whirlwind finished a round of golf before she took care of the lunch crowd at Café Adriana. In the evening, she danced to the music of The Beatles playing at the function room below and ate the food, complimenting her captain waiter on the sinuglaw (sinugba or grilled pork and kinilaw combined). That just told us that she lets her cooks innovate, a testament to the free spirit that she is.

Baguio was a whirl of activities as well because the yearly flower festival called Panabenga (the local word for blossoming season) was happening at this summer capital. For people like myself who are not drawn to crowded events, and this one undoubtedly always is, it took a plea from my balikbayan sister for me to go up and meet her there.

Every region invents its own festival, following the success of the Aklan Ati-Atihan, the “original” as one would call it. Lucban and Sariaya were not content to have their procession and decorated houses of harvest products and kiping during the Pahiyas; they now include dancers celebrating the coconut in costume and choreography.
Leyte has its Pintados and Capiz its festival of seafood done with lights—the participants nevertheless still swaying to the Ati-atihan beat.

At Panabenga, the group dance sequences were held the day before the flower floats, which carried TV and movie personalities, a beauty queen, sleepy children even. There was a dragon made of hundreds of everlasting flowers. But once the last of the troupes and the flower floats passed, it was time to go back to what you do in Baguio—eat, go to market, have naps, which the cool weather induces.

Hunger is also what Baguio induces, because after that rather fast four-hour trip aboard a luxury bus, and even while snacks and water were provided by the bus “stewardess,” afternoon merienda was needed to bridge the hunger gap until dinner.

At the Manor in Camp John Hay, coffee was French pressed in the room (a suite, really) taken with fruits and pastries. A bit of a horizontal stretch, and we were ready for dinner of ample salads (try the salmon and roasted shrimp), thick onion soup that’s perfect for the Baguio weather, and about the best Grand Marnier soufflé there is.

Chef Billy King supervised the menu and dinner the following night at the Manor’s Le Chef. Salad was roasted prawns and blackened salmon with buffalo cheese, similar to what I had the night before. There was garlic consommé. The table was asked to choose from two entrees; Black Angus Tenderloin with a port wine truffle sauce was mine, while the others had pan-fried Chilean sea bass with saffron sauce.

The best wedding banquet in my book was at my friend’s son’s nuptials. Catered by the Manor at the John Hay Golf Clubhouse, the salad was beautifully fresh and lightly dressed. And the steak was perfectly done and hot, a feat in Baguio weather.

My friend thought I had asked King to make it special when she saw me talking to him the day before the nuptials. But I didn’t. A good chef, after all, need not be reminded to make an event special.

Fresh ‘halaya’
Baguio market is always a destination. Strawberry was in season, but those big red fruits couldn’t tempt me from getting my fix of Tamtamco’s ube halaya (purple yam jam). The halaya is always freshly cooked, still hot when you buy it. And the people there are so proud of their product that they would rather not sell to you if they know you will not go down that day, because the halaya will become watery even in the fridge, and will not be good.

Cordillera coffee beans are another must buy; I love talking to customers waiting for their orders just to ask them why they buy a particular bean.

Mitos warned me not to believe that the black rice is organic, but I bought anyway the black malagkit (sticky rice), labeled as balitanao variety, which I like to make into biko (rice cake). The regular black and malagkit gets mixed to end up as black paella, with or without squid ink.

But on this trip, we discovered Mang Jake, who sells bagnet at a small corner beside the market police precinct. Apart from taking home some, we had one pack refried at the Manor’s kitchen, and ate it with room service fried rice and chop suey. Taken with beer and gin tonic and shared with siblings and friends, it made for a Panabenga to remember.