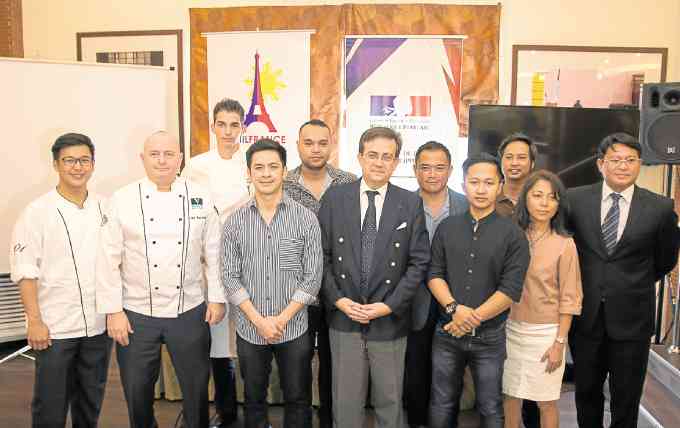 From dealing with diners who want the food on their plate made “sweet,” or those who ask for patis (fish sauce) on the side—these are examples of the travails of chefs cooking French cuisine in the Philippines.

The Embassy of France in the Philippines, however, is doing its best to fix that, with its participation in a global initiative of the French Ministry of Foreign Affairs and International Development, to promote French gastronomy.

The event, called “Gout de France” or “Good France,” is on its third year. Selected chefs will serve traditional French food on March 21 in their respective restaurants, the individual menus of which have been screened and approved by a committee in Paris led by Alain Ducasse. Two thousand chefs are participating across five continents.

“Good France” is loosely based on the legendary French chef Auguste Escoffier’s “Epicure’s Dinners,” which was meant to popularize French cuisine overseas.

Thierry Mathou, Ambassador of France to the Philippines, said he’s been aware of how French cuisine has been seen as “elitist.” “Good France” is meant to dispel that.

“When you think about French cuisine, don’t think of it as an elitist cuisine, but as a cuisine that comes from the roots of the people, which is part of our culture,” Mathou said at the event’s press conference at Vatel Restaurant Manila at Hotel Benilde in Malate, Manila.

Vatel’s executive chef, Pierre Cornelis, will cook in the envoy’s residence on March 21.

Magsaysay, a Zambales native who lived for 15 years in Paris, 10 years as a chef, will serve at CAV a menu that reflects the multicultural scene of Paris today.

“It’s no longer [called] fusion, it’s a natural progression of Paris being the capital of the art of living, and gateway of other cultures like Africa, Asia,” he said.

The CAV menu “will be very French with Philippine products,” he said.

While the March 21 menus are traditional French, the chefs are encouraged to incorporate local techniques and ingredients.

Magsaysay cooked for the French envoy in last year’s event.

Endaya, who cooks for the Quezon City-based French Mediterranean restaurant, Lemuria, noted “a little resistance” among local diners when served with traditional French fare—“They want it a bit sweet, or they’ll ask for patis”—but he said, “We’re getting there.”

“With all these culinary schools, the knowledge is getting better, that it’s not that elitist,” he said.

According to Endaya, it’s the technique that usually defines French cuisine, but Filipinos will be surprised that many of the dishes “don’t need a trained palate, or are not an acquired taste.”

“Guests should be happy,” he said. “But I’ll explain first why it’s like that. I’ll probably give in [to odd requests] the first time, but don’t expect me to do so every time. If you want your food to taste like Filipino food, go to a Filipino restaurant.”

Cornelis, a classically trained chef who has been in the Philippines for seven years, said the spirit of “Good France” isn’t just to highlight the standards of haute French cooking, but also for diners to experience French culture.

At Vatel, he believes in Filipinizing the spirit and hospitality while serving authentic French cuisine.

“Fusion can be confusing. People who come here spend good money, so they want the authentic experience,” said Cornelis, who’s also a faculty of the De La Salle-College of Saint Benilde’s School of Hotel, Restaurant and Institution Management.

The price for Vatel’s “Good France” menu has been adjusted in consideration of its mostly student patrons, said its chef.

It is significant that France and the Philippines are celebrating 70 years of diplomatic relations, and “Good France” is the first culinary-themed event for the yearlong “PhilFrance: Feel French!” festivities.

“Bon Appetit,” an open-air French-Filipino food market, will be held in September.