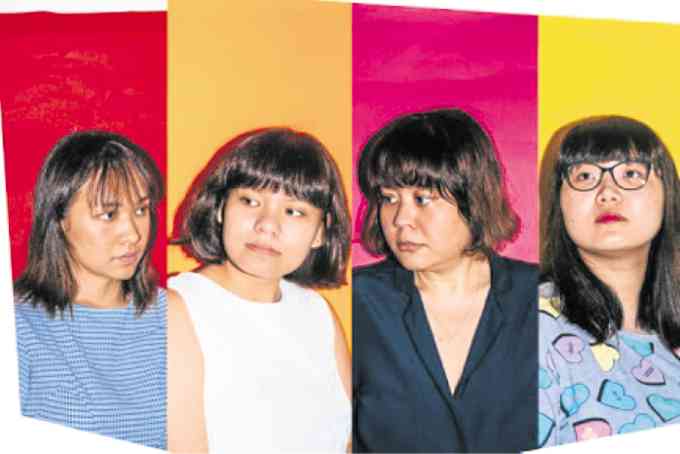 Big bang theory. Hinge Inquirer’s Jullia Pecayo, Nimu Muallam, the author,Mintzy Flor, looking 10 years younger, thanks to our bangs. Although, for the sake of honesty, they are all probably 10 years younger than me.—PHOTOS BY PATRICK SEGOVIA

Before I left on a two-month vacation for the US in the early ’90s, my mom thought it would be nice to send me off with bangs. I returned two months later, double my weight, with a pudgy face and bangs. Great way to start the fourth grade.

Me, pinches nose to avoid impending headache: “BANGS. WHY. DID. YOU. MAKE. ME. GET. BANGS.”

Mom, clearly weirded out by my question but game to answer anyway: “Because you have a high forehead!” Her tone seemed to say “duh.”

The trauma of my weight gain (thanks, American snack industry), coupled with my less-than-flattering bangs, seemed doubly amplified in large part due to a) puberty and b) everyone else.

I couldn’t move an inch (or snarf a donut) without some insensitive twerp mocking my weight.

In retrospect, it seemed clear that I had conflated the two developments. But when I went through photos I had my mom dig up (again, for the sake of this article), it was clear that my bangs were not so terrible. They were, in fact, kind of cute.

When I texted my hairstylist Jing Monis earlier this week, asking if I could rock some bangs, accompanied by a photo of myself with all my baby hair gathered on my apparently high forehead, he replied in the affirmative.

Me, a serial doubter, replied: “Really? Be honest, Jing.”

I booked an appointment the following day so I wouldn’t chicken out and showed up doing deep breathing exercises to counter my bangs anxiety.

In under an hour, I emerged, still alive, with bangs. And seemingly younger.

That’s because two people said so. Online. And if someone says it online, then you know it must be true.

Many of my Instagram followers (Ok, fine, they were my friends) private messaged me to say they loved my new younger look. But this is just a tiny sampling of my many millions of followers. (Ok, fine, I only have 3K-plus-plus followers. Mourn with me now. Or follow me @bealedesma.)

“What are your thoughts?” I replied. “Do bangs make me look younger or is this haircut so shocking on my non-baby persona that it makes you think I look younger?”

Except for the depressing hipster part, looking younger is a byproduct of bangs.

And that kind of mental trickery, the way fragrance can trigger a specific memory or feeling, is probably more effective than any eye serum or SPF-laden moisturizer. (Although, don’t take this as a call to arms against moisturizer or SPF. We need both.)

Humor-fashion site Manrepeller tackled a similar theme with a story called “The Best Antiaging Product Is Actually for Your Hair,” using Sienna Miller’s Golden Globes coiffure as a prime example of hair as an antiaging device.

“The best antiaging product is not what skincare technicians and experts (and regular dermatologists, too, I guess) have heretofore led us to believe,” wrote founder Leandra Medine. “On the contrary, it’s not even a product that goes on your face. Instead, it’s quite simply a ribbon.”

This trend appeared on the street during fashion week, when some women utilized the Dior or Chanel ribbon from their shopping packages and used it to to cinch their ponytails.

Aside from the adaptive re-use, the style is a throwback to a kind of ’50s sock-hop, peppy nostalgia that’s just a hair shy of camp.

These tricks are often cheaper than most beauty treatments, and employ the most powerful of tools: sentimentality.

In reminiscing our halcyon days, we often gloss over the bad and remember the good. And, in the case of bangs, that’s often the case. As my hairstylist Jing Monis said, “It hides wrinkles, too.”