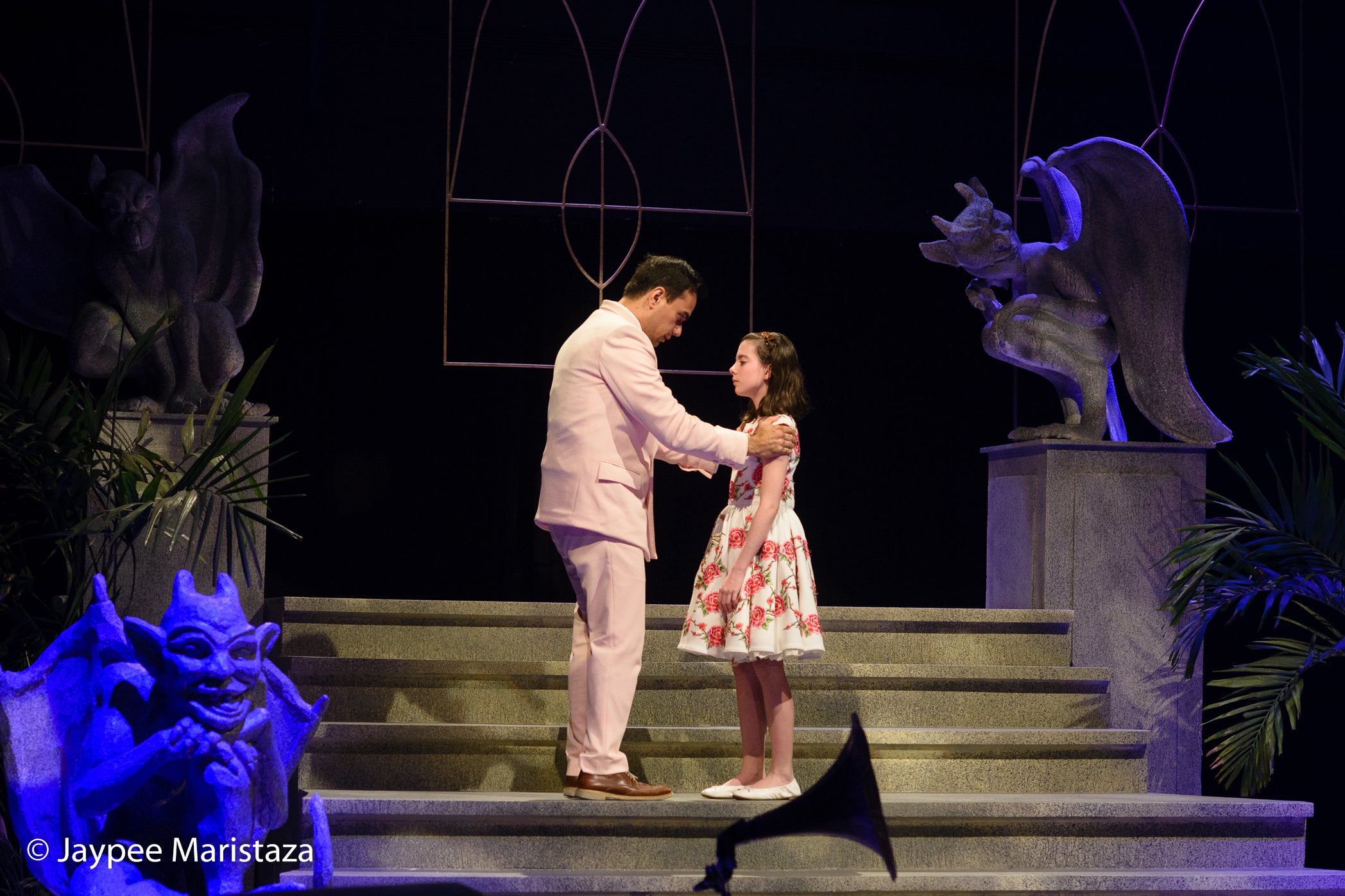 Freedom, fantasy, desire and danger in ‘The Nether’

That brutal, mocking question and its many complex, yet highly personal answers hold the key to unraveling the mystery and the drama behind “The Nether,” Red Turnip Theater’s provocative rendition of Jennifer Haley’s sci-fi crime thriller.

In a mere 90 minutes, it plumbs the fluidity of sexuality, the borderline between the permissible and the moral, and the ultimate nature of reality.

Papa (Bernardo Bernardo), the outraged owner of a piece of cyber real estate, hurls the challenge at a young detective (Jenny Jamora) out to police the perceived excesses happening in the titular fantasy land.

The Nether is a combination of the cinematic Matrix, the online game Second Life, and Star Trek’s holodeck; people “plug in” to an artificially constructed reality where they can anonymously live out their wildest fantasies, from their most sublime aspirations to their deepest, darkest desires. With privacy and anonymity the two sacred pillars granting its players protection, the Nether’s users can interact with other visitors to explore their fiercest sexual fantasies and live out their most fervent secret identities as avatars.

Simulated murder can be one way to let off steam. Nothing is too sacred or too profane to experience. As Papa puts it, the Nether offers its visitors the trip of a lifetime: to indulge their most cherished dreams and basest desires without fear of consequence, or the conventional mores that hold them back in real life.

But the lady cyber cop is not buying any of it, not when scores of people in real life are immigrating to the Nether permanently. They finalize their affairs, sign off their properties to their loved ones, and maintain enough funds that will keep them plugged into the Nether as comatose patients until they physically die.

Bernardo and Jamora form the two polarities that argue for and against the existence of the Nether. They circle each other like vicious animals, Bernardo’s larger-than-life, fiery but fading lion king butting heads against Jamora’s cold, calculating yet equally driven jackal.

Their own individual agendas unravel as the play progresses; and with it, the intellectual journey that Ana Abad Santos’ direction seemingly takes at the outset moves into something more personal, intimate and disturbing.

What raises the emotional stakes, for characters and viewers alike, is the participation of virtual minors in the plot.

Haley’s choice of the one taboo act that can make the audience squeamish is far from sensationalistic: the presence of a child, which can rouse protective, parental love in most people, ravaging possessiveness in others, and a merging of both among those who don’t see a difference in the two.

That sense of innocence is what draws the other characters into Papa’s dark but legal cyber den, fronted by a pleasant hotel lobby appropriately guarded by stone gargoyles. Ed Lacson’s set design is a labyrinth of stairs, half-open spherical roofs, and a lot of dark spaces, with John Batalla’s lighting design marking transitions between the real world and the virtual one.

Sound designer Teresa Barrozo notches the suspense with a blend of machine noises and those subliminal bumps that happen only at night.

The one technical flaw that mars the onstage proceedings is the Power Mac Center Spotlight’s acoustics, which muffle the words of the actors and occasionally make the dialogue incoherent. Fortunately, Abad Santos has an ensemble that can rise above the sound limitations. But they do deserve better.

Bodjie Pascua gives another solid performance as the world-weary professor who yearns for something his real-world success never gave him. TJ Trinidad’s gentleman customer is prim, proper and stiff in his initial reluctance.

Junyka Santarin is a find as the vibrant Iris (Alba Berenguer-Testa alternates) whose presence lights up the stage; she is cute without being cloying, and genuine intelligence is hinted at by the layers of meaning behind a word, a smile or a hug from her.

Still, Trinidad’s internal struggle appears to dominate his character-playing more than his interplay with Santarin’s character, leaving the feeling that we’re still within safe bounds. Only the dialogue and one prominent prop alert the audience to the nightmarish scenario happening.

One wonders: Had Abad Santos allowed more sensuality and lessened a bit of the paternal dynamic, would it have worked better? And would we have been ready for it?

The final scene does go all out to break the walls of convention and “normalcy.” Notions of right and wrong, age and sexuality, morality and legality, the physical and the spiritual are shattered in one quiet conversation.

Audiences who join this ride will never see their world—the real and the virtual—the same way again.  —CONTRIBUTED