Will you marry me? You can’t say no in Batanes | Inquirer Lifestyle ❮ ❯ 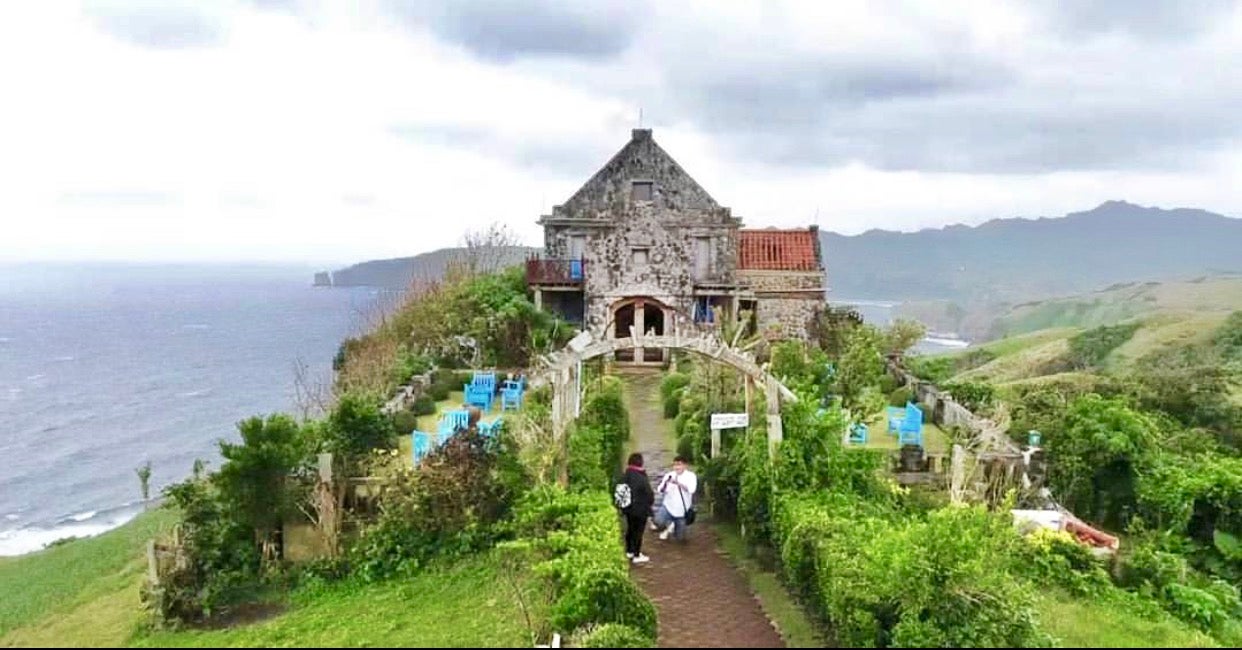 Luis Santos proposing to Jam Millonado amidst the beautiful backdrop of Fundacion Pacita and the wonderful scenery of Batanes island.

Will you marry me? You can’t say no in Batanes

Batanes, the smallest province in the Philippines, with a population of more than 17,000, is an off-the-track destination for most people.

It is almost like going to Hong Kong, with its pricey airfare. Our group of 15 planned a Batanes trip for early this year, a good time because the weather was at its coldest.

We were blessed with a glorious 14-degree temperature, with northerly winds that occasionally caused it to dip a bit further. In this kind of cold, who would want to leave the island?

And so, at 3 a.m., we all woke up each other to catch the 6 a.m. flight to Batanes, the only flight available from Manila.

This was my second trip to the province and I wasn’t quite so excited about it. But our group was oozing with laughter and energy.

I slept the entire flight, waking up just in time to see the rugged coastline of the land of the Ivatan.

Tourist registration is a must,  like in Boracay, with a P350 per person environmental fee, which was non-existent when I first visited the island six years ago.

Time flies so fast, indeed, that the Batanes airport has grown four times its old size. However, the local hotel industry apparently can’t cope with the demand, given restrictions of land ownership.

We were driven to the Batanes seaside hotel for an early breakfast, then to the hotel annex in Basco, Batanes’ capital.

Basco hasn’t changed much, except for the usual unwanted architecture that blurs the heritage stone houses. Larry Mallari, our dentist friend who was with me on my first trip, and I strolled around and learned that the restaurant we used to go to had already closed. That was the only decent one in town back then.

Abad street, the main road, is now full of ukay  stuff, vegetable stands, hardware stores.  Our hotel was full board-and-lodging, so food wouldn’t be a problem. Also, ours was a group of foodies—we brought 30 kilos’ excess baggage of cooked food, from  binagoongan, Bicol express, embutido, Calumpit longganisa, menudong puti to artisanal sausages and all sorts of chips, nuts and canned goods.

Millie Reyes and her daughter Karla—the clan behind the popular Plaza Ham and beef tapa—handcarried a boxful of their specialties to satisfy our craving for city food. Yes, this group was afraid to go hungry!

The Sabtang Island tour was unforgiving. We needed to wake up at 5 a.m. to catch the 6:30 a.m. one and only boat ride to the place.

As is customary, we first visited the Mt. Carmel chapel.  Perched on a hill, this was built by the Ivatans not only through cash donations but also through labor. The facade was patterned after Batanes’ signature stone houses.

It has heavenly paintings on the ceiling done by an Ivatan artist who was supervised by Vicky Abad Kerblatt, sister of the late Pacita Abad, one of the country’s foremost artists.

Even then, the chapel is a good stopover, where you need to pray for a good, fruitful and safe journey.

Next we went to the Idjang viewpoint. There are no words to describe the view here. The cliff falls down to about 50 meters,  the powerful waves splashing over big corals and stones that break the waves into small bubbles. It looked magnificent! With the cool weather and refreshing wind, our group was ecstatic about this early fulfillment of  the beautiful Batanes we had in  mind.

Next on the agenda was the Valugan boulder beach—not your white sand beach for suntanning, but boulders lining its rough shore.

The story goes that the boulders were washed ashore during a volcanic eruption on the island centuries ago. People do rock formation here, but the harsh wind and rain stopped us from forming our totem pole of boulders.

Our next stop were the rolling hills. Off we went on the path of a one-way street, and when we reached the destination, the wind proved so powerful and rough that we opted to leave the place and go straight to the Basco lighthouse. Hats off to the local tourism office—the Basco lighthouse is now emblazoned with “I love Batanes” in bold letters, in the tradition of the Love sculpture of Robert Indiana.

The lighthouse has been rehabilitated. You can now climb to the top and see Basco in its 360-degree glory, the wind lashing at your face and body. It was  like a wind massage, so unlike any massage we’ve had.

Our last stop for the day was the Basco Cathedral, its patron saint, Sto. Domingo.

That night, everybody gathered in our hotel veranda, savoring the cool 14-degree temperature. The breeze coming from the north would make you shiver and believe that Batanes was the place to relax in and enjoy the slow life of yesteryears. Truly invigorating!

On our second day, we visited the southern part—the town of Mahatao church, its image of the Virgin Mary with ivory head and hands. On the pier in front of the church, you can take the boat to Sabtang Island.

From the church we went to the famous “honesty store.” Unmanned by any staff, it relies on the truthfulness of people. The townsfolk, indeed, must be so honest that the store has been operating for decades.

We also visited the oldest house in Batanes, in the same area called “Dakays.” The homeowner died a year ago. I remember how, on our first trip, we had our pictures taken with her. She was kind and gracious.

Next stop was the Batanes version of “Marlboro country.” The place was just magical— rolling hills and knolls, surrounded by a carpet of the greenest grass, with the Batanes wind continuously blowing.

You could almost hear Julie Andrews sing “the hills are alive…”

We went back to Mahatao for lunch at Paulyanna’s, one of the best places to eat when you’re in Batanes.

On our way back to the city, we passed by Fundacion Pacita.  A visit to Batanes is not complete without going to Fundacion and see its stunning 360-degree view of the roaring sea, blue sky, rugged mountains and hills and the sand with the wind whirling all around you.

Little did we know that a couple in our group would propose to his girlfriend of three years. With us in the background holding a “Marry me” sign, Luis Santos, the son of Liz Licaros, proposed to Jam Millonado, with the iconic Fundacion Pacita as backdrop.

When she said yes, everyone turned into a joyous mode and we continued our revelry at Cafe Yukon.

On the same night, we celebrated the birthday of Ramon Tan, the man behind the famous classic Savory chicken. We had an Ivatan platter of fern salad, grilled chicken, ribs, pork, fish and barbecue a la Basco. Of course, we also binged on the place’s signature coconut crabs, courtesy of the birthday boy. The coco crabs were rich in fat and went very well with rice. It was heavenly.

On our last day, we woke up at 5 a.m. to  catch the boat crossing the channel to Sabtang Island. It was a good and generally calm 30-minute boat ride. At the port, we were welcomed by the sight of the San Vicente Ferrer church built by the Dominicans in 1783.

Going to Sabtang was my promise to San Vicente Ferrer. I am a devotee of the saint believed to cure children’s ailments. This is probably the reason he is the patron saint of orphanages. I was introduced by my grandmother to this devotion in my childhood. My eldest brother was sickly and we would go to San Vicente Ferrer church in San Juan,  Batangas, every April 5 wearing the Dominican “abito.” I have in my collection 15 images of the saint, all old, the biggest as tall as a 1-year-old kid.

I felt happy to set foot in the northernmost church in the Philippines devoted to San Vicente Ferrer.

We rode the pick-up with an unusual roofing of bamboo and cogon grass that abounds in the island. Due to lack of materials, the Ivatans are very resilient and innovative, thus the unusual roof of our pick-up.

On our first stop, we did a walk-through of the Savidug stone houses, all of them still standing after many centuries—a testament to the strength of  materials and the Ivatan architecture. Most of the houses remain in use, although in rundown condition, many of their inhabitants having migrated.

Inhabitants, usually after graduating from college, leave the island for a “better” life. The houses cannot be rehabilitated, given the restrictions on coral gathering. The houses are made of corals taken from the sea, so that the textures and styles of the houses differ.

Rows and rows of coral houses lined the streets. It was a picture of a village lost in time.

Along the way, we saw vegetable plots planted to carrots, cabbage, eggplants, onion leeks and water spinach. Talking about organic farming and sustainability—I guess the Batanes folk must have practiced it ahead of everyone else, given their distance from civilization.

The Chamantad viewpoint left us in awe of Sabtang Island.  If you enjoy walking through Marlboro country, this one is more challenging. The cliffs are higher, the waves fiercer and the sea and the sky bluer. The wind chills you to the bone.

We climbed the highest point and were glad we did— the view was just to die for. We did jumpshot photos, of course.

Beautiful is an understatement. One must visit this place at least once in a lifetime to experience its rugged and natural charm.

We had lunch on Morong beach with the standard Ivatan fare and had our pictures taken in the famous “Mahayaw” (Noah’s Ark), the last of the attractions on the island.

As we boarded the boat, we felt melancholic trying to absorb all the beautiful sights  we had seen on this Sabtang Island. There was still Itbayat Island to explore, but the boat ride was three hours from Batanes island.

One day, the group promised, we would explore Itbayat Island like what the Dominicans did centuries ago.

The trip was exhausting but worth every minute of it.

Not only is Batanes beautiful, it also has the power to lure us away from the urban mess, from the frills of modern life—we were actually grateful there was no phone signal.

Yes, my Batanes, we will be back!