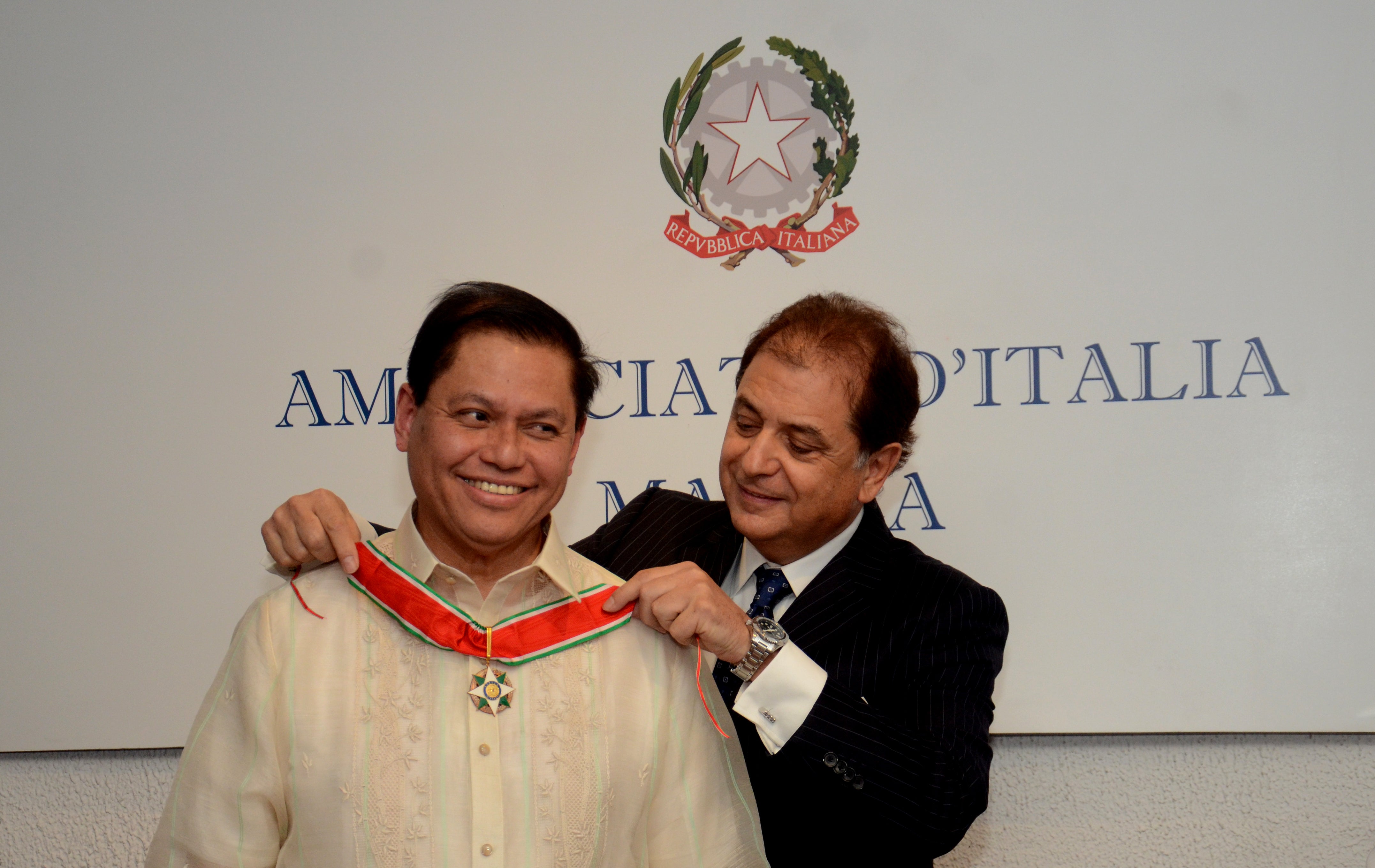 ‘Bravissimo!’ Sunico is made ‘Commander’ of Italian Republic for cultural achievements

Multi-awarded piano virtuoso Raul Sunico is famous for his sensitive capturing of Filipino music, be it the classical kundiman and folk songs or contemporary and pop compositions.

Through his recordings of familiar music and regular appearances, he has made the art of the piano more accessible to the uninitiated.

Unknown to many, he is the only pianist in the world to have performed the four piano concertos of Sergei Rachmaninoff in one night. In the past, these technically challenging concertos would be shared with other virtuosos in a single concert.

How did Sunico manage the feat?

“No special exercise. I studied fast—that helped a lot,” he says. “I’d practice two to there hours a day only since I have work at UST.”

Sunico has been the Cultural Center of the Philippines (CCP) president since 2009, and a faculty member of the University of Santo Tomas Conservatory of Music.

The Italian government and Embassy recently honored Sunico by conferring on him the Commendatore (Commander) of the Order of the Star of Italy, an award granted to Italian expats and foreigners who have strengthened ties between Italy and the host country. The Commendatore is a couple of ranks above knighthood.

“I may have eaten more pizzas,” said Sunico in jest when he accepted his award, held at the residence of the Italian ambassador. Most of the guests came from the cultural sector.

As CCP president, he has collaborated with Italian ambassadors on several projects, such as the Italian National Day;

One of the highlights of CCP’s partnership with the Italian Embassy during Ambassador Massimo Roscigno’s term was the celebration of the 200th birthday of Italy’s greatest Romantic opera composer Giuseppe Verdi, with a gala concert and an exhibit in 2013. The following year, Sunico mounted Verdi’s “Rigoletto,” which is rarely produced in the Philippines due to stiff production costs.

Another of Sunico’s important contributions was to bring in a Fazioli Pianoforti, a premium brand of hand-built pianos made in northeast Italy. Created by an Italian engineer and pianist, the Fazioli has become the concert grand piano of choice for many artists for its sound perfection and smooth keys.

Sunico first encountered the Fazioli when he held a solo concert at the Sydney Townhall in 1995, then in Amsterdam six years ago. The experience of gliding through the keys and hearing the sounds blossom to their highest qualities left him speechless.

As an artist, he batted to get the instrument for CCP.

“I had to defend the purchase in Congress and the Department of Budget because it was part of our capital expenditure. I justified it (by saying that) the concert hall needed new pianos. The CCP hadn’t acquired new pianos. The concert pianos need to be of top caliber,” says Sunico.

The Fazioli was “baptized” by the Italian ambassador’s brother, Fermo Roscigno, a concert pianist who had performed with the Philippine Philharmonic Orchestra in November 2016.

Under a scholarship from former First Lady Imelda Marcos, he finished his postgraduate studies in music from the Juilliard School in New York. To pursue his concert career, he acquired a Phd, major in Piano Performance, from New York University.

Asked about his influences, Sunico is unable to point to a particular figure but says he admires Russian-American classical pianist Vladimir Horowitz, remembered for his pyrotechnics and transcending the piano’s limitations; and Polish artist Krystian Zimerman, known for his finesse and wide dynamic range.

Now on his eighth year as CCP head honcho, Sunico has kept the music scene alive by reviving full-length opera projects after a long spell, and launching off-site video screenings of the Metropolitan Opera.

He has also organized festivals for symphony and jazz bands, and continued to welcome foreign singers and pianists to CCP.

Sunico describes his management style as “relaxed,” since he trusts the managers of each department. He says he will continue sharing his talent while overseeing the rise of new performance theaters at the CCP Complex. More than building the hardware, he’s looking to the future.

“We hope to develop young talents who will be the musical leaders of tomorrow,” he says.—CONTRIBUTED