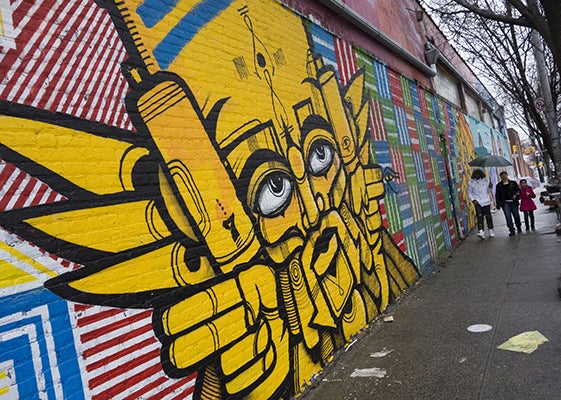 In the 1970s, DJs, dancers, graffiti artists and the first rappers came together in the burned-out buildings of The Bronx, giving birth to hip-hop.

Today, hip-hop is a multibillion-dollar industry and The Bronx is on the mend, but New York’s northernmost borough is struggling to capitalize on its heritage.

Hip-hop began at 1520 Sedgwick Avenue on the two-tone linoleum floor of a ground-floor room in an anonymous brick house, under an impromptu neon light.

There on August 11, 1973, Clive Campbell (nicknamed Kool Herc) mashed together snippets of recordings on two turntables and, without knowing it, became the first hip-hop DJ. Coke La Rock became the first MC as he delivered spoken-word lyrics over the music.

Hip-hop culture—with its mix of DJing, rapping, graffiti and dance—has gone on to become a global phenomenon. The Bronx has restored several emblematic sites including Cedar Playground, the scene of the first open-air hip-hop parties, and the Bronx River Community Center where pioneering DJ Afrika Bambaataa had his start.

The early days of hip-hop have also been dramatized in a television series, “The Get Down”, which premiered in August.

But little of the giant hip-hop industry now comes out of or benefits The Bronx, which despite recent growth remains less prosperous than glamorous Manhattan or fast-growing Brooklyn.

A plan to create a hip-hop museum in The Bronx has repeatedly been proposed and resurrected but has not come to fruition.

Rocky Bucano, a businessman and producer behind the Universal Hip Hop Museum, has since teamed up to create a foundation to support the project, enlisting several figures from the first generation of hip-hop including Kurtis Blow.

The current plan calls for a complex over several acres on the Harlem River, which separates The Bronx and Harlem. Alongside the museum will be businesses, green space and affordable housing.

Bucano said he has received support from several city and state elected leaders and, if the city government gives the green light, he will seek support from “the companies that have benefited from the exploitation of rap music.”

The museum will be “a beacon of economic activity for the borough that gave birth to hip-hop,” he said.

Borough president Ruben Diaz Jr. said that the museum could also show visitors the fresh construction and lowering crime of The Bronx, instead of the “rundown buildings” they are expecting.

“Hip-hop with a museum like this would be an excellent [venue] where folks could come in and say: It’s not like it was. But we haven’t lost our flavor. We totally embrace that this is the birthplace of hip-hop,” he said.

He likened a hip-hop museum to the Rock and Roll Hall of Fame—the shrine to rock culture in Cleveland that has increasingly been inducting rappers, with the late Tupac Shakur to be honored next month when the gala comes to Brooklyn.

“This is no disrespecting rock and roll or the Smithsonians, but one of the most embarrassing things is when you get hip-hop artists that are being inducted into the Rock and Roll Hall of Fame. It would have been nicer if they had been inducted into a hall of fame right here, where it all started,” he said.

Diaz was hopeful for the museum but said it was critical to bring commitments from the hip-hop world.

Debra Harris has found a growing market by bringing tourists to The Bronx to see hip-hop history. Relatively few are American as she sees more interest from visitors from Britain, France and Germany as well as Australia and Japan.

But the reputation of The Bronx remains such that, 15 years after she launched the tours, Harris starts her visits in Harlem so as not to scare people off.

“It’s all about Manhattan and now it’s about Brooklyn. Eventually, The Bronx will catch up and people will start getting interest, but as long as there’s a level of fear, you may not feel comfortable going there,” she said.

The number of murders in The Bronx has tumbled six-fold since 1990, even if the borough still has the highest crime rate in New York.

And with prices in Manhattan and Brooklyn increasingly out of reach for many New Yorkers, developers have invested heavily in the southeastern tip of The Bronx in the past few years.

Developers, for their part, have clearly seen the benefit of bringing a touch of hip-hop to a street of building.

BG 183, the alias of Sotero Ortiz of the graffiti collective Tats Cru, said that developers are constantly reaching out in hopes that a splash of spray paint can bring a badge of authenticity—as with a former factory in the Hunts Point neighborhood that will reopen as an office building months after its graffiti mural.

The irony is not lost on the Tats Cru, who for years had been dodging the police as they took their art to streets and trains and now are invited to art galleries.