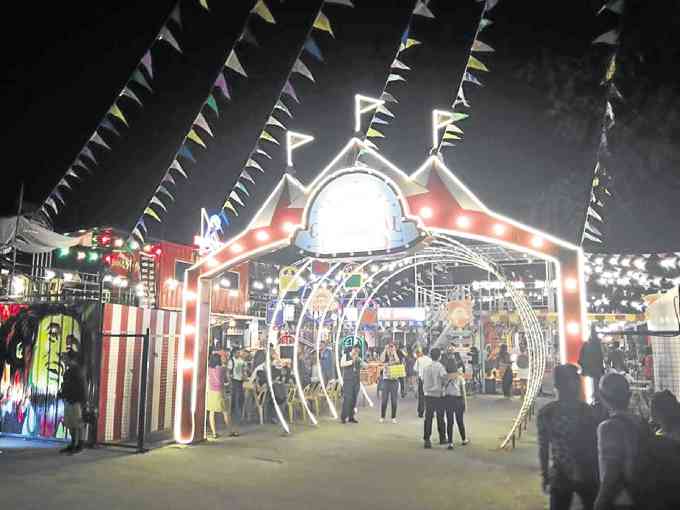 Until a couple of years ago, Marikina was known solely as the Shoe Capital of the Philippines. That distinction has gradually faded with the slowing down of local production and the entry of foreign shoe brands.

Now the city on the eastern border of Metro Manila has become popular as a dining destination, with numerous eateries located near or lining Lilac Street and Mayor Gil Fernando Avenue.

People began flocking to these venues because the food was good and the spaces were Instagrammable.

Two of the more prominent ones are Rustic Mornings by Isabelo with its al fresco garden style, and Beeffalo by Hotrocks with its grilled meat-centric menu.

These days, however, the trend seems to be toward food parks—empty lots that are sectioned off using repurposed container vans. These sturdy metal boxes line the perimeter of the lot and are rented out to budding entrepreneurs who sell everything from street food barbecue and fall-off-the-bone ribs to churros and ice cream.

On Gil Fernando Avenue alone are several food parks to choose from, each with its own concept and tenant mix. The Truck Park is hard to miss with its facade featuring caricatures of current and former Presidents. It is considered one of the largest food parks on the stretch and is the first to offer a cashless payment system.

Customers first have to load a debit card at the cashier before they can pay for their orders in different stalls. It is similar to the payment system in a Bangkok food court. There is a P50 deposit to cover the cost of the card, which can be refunded after the meal.

At the Truck Park, we sampled items from Bacon Brigade, a military-theme stall where practically everything has bacon. They cure and smoke their own thick-cut slabs of bacon. Bestsellers include the Kevlar, two slices of bacon with two eggs and rice, and the Brigadier, a slab of braised bacon served with rice and a side of coleslaw.

We ordered the bacon-wrapped shrimp that was tasty if a bit tiny, portion-wise.

Looking for comfort food? Cheese Cartel has a grilled cheese sandwich and tomato soup combo that just might hit the spot.

We noticed, however, that there were no wastebaskets or table napkins on site, so it’s best to bring wet wipes and pocket tissues. It can also get a bit noisy, especially with the music played full blast and the coin-operated basketball hoops some guests use while waiting for their orders.

The two-level Crave Park has a more laid-back vibe. The lighting is more subdued, not glaring, and the seats are more comfortable. Customers can order in the stalls (again made of shipping containers) items such as chicken wings, milkshakes, ribs and a Filipinized version of Japanese tempura.

There is even Pinoy food from The Archipelago by Barrio Fiesta which offers Crispy Pata and Crispy Liempo for around P200 each. Their “Ilocano Rice” is a full meal of rice topped with lechon kawali, longganisa, tomatoes, onions and salted egg.

We were pleasantly surprised with Pub Express and its Baby Back Ribs that were ample and flavorful. That our order was served within minutes made it even more remarkable, since it took anywhere from 15 to 20 minutes for our other orders to be ready.

This was true for all the Marikina food parks we visited that day.

To pass the time, customers hang out on the second level with a view of the street and a few trees. Fishbowl-size drinks topped with several colored straws are the way to go in these food parks. They are popular with barkada, families and dating couples who are willing to share, although the squeamish can always order their own beverages.

Located beside Marquinton Residences, one of the first condo developments in the city, is Foodtrip, a small group of stalls surrounding a common dining area with a shade tree bedecked with string lights. Customers can choose from tacos, shawarma and roasted chicken, but its unique selling point is the wall art that is colorful, funny and IG-worthy.

True to its theme, the Carnival Food Park has a zany, circus theme best appreciated at night. Customers pass through neon rings arranged in concentric circles. The low facade is painted with images of The Beatles and Bob Marley—quite a disconnect, but nobody seemed to be complaining.

That evening, it was filled with families and groups of friends who chose what they wanted to eat before circling back to their respective tables. These food parks encourage communal dining so friends can sample different items without having to eat everything on their plate.

One of the most popular stalls is Icebox, where the desserts are flash-frozen with nitrogen. A bestseller, Dragon’s Breath, consists of chunks of cake that emit a cold smoke once placed in the mouth. We were told to chew immediately because the frozen cake can stick to the roof of one’s mouth.

Those who grew up in the ’80s might be reminded of the slabs of dry ice that came with boxed orders of Magnolia ice cream cups. Dropped in a glass of water, the chunks of dry ice would bubble and emit a thick smoke. At Icebox, one can relive that childhood memory for just P150.

Most of the stalls in these food parks open at 4 p.m. but the best time to go is at sunset when it’s a bit cooler. Dress down and come with a fully charged phone. You’ll want to take pictures.