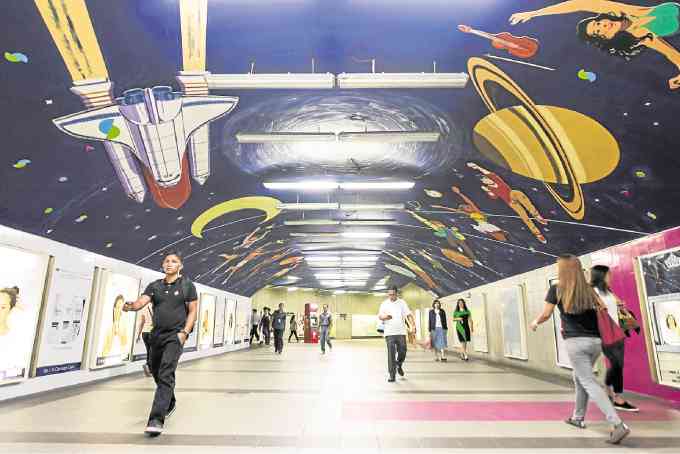 How Makati, the business district, is also now an arts hub

Baby steps have already been taken, says Ayala Land corporate brand marketing head Cathy Bengzon: “See how many buildings have their own art collections? Private businesses have decided on their own, it’s not like there’s a master plan.”

Bengzon gives a respectful nod to RCBC Plaza’s Yuchengco Museum that houses “the most exquisite material designed to encourage cultural opportunities for those who work, visit and live in Makati” and its theater, the Carlos P. Romulo Auditorium.

“We did not solicit it,” said Manuel Blas, vice president of Ayala Land’s Strategic Landbank Management Group. “Mr. SyCip’s office called us to donate a Japanese garden, in cooperation with Security Bank. Seeing it is like being in Japan. They brought in authentic Japanese designers who themselves constructed it, putting in the big stones and sand.”

Bengzon points out that smaller galleries have also begun to emerge in the city.

“If you go to Karrivin Plaza (along Chino Roces Avenue extension), there’s a lot of artists,” she says.

Project development manager Marishiella Aguilar adds to this list La Fuerza compound and The Collective—two venues with a heavy presence on the art scene.

Bengzon describes the evolution as “organic,” adding with a hint of pride that Ayala Land has “partly” been a “catalyst” in the process, since most of its developments are deliberately designed to house art pieces.

One of Ayala Land’s recent projects is the sprucing up of pedestrian underpasses in the commercial-business district.

“There is an interesting story,” says Bengzon. “We sent out invitations to companies and locators, asking if they wanted to adopt a particular underpass. Our biggest worry was whether we would get their support.”

“The intent was not to use the underpasses as advertising space. We only wanted to uplift how the underpasses would look,” she explains. Notable among the underpass designs was the visible lack of self-promoting ads from sponsors.

“Art provides Makati with an additional layer that distinguishes one city from another,” says Blas. “Now we are where we are. We see around us all signs of art so there is an opportunity to make this an arts and culture center, so when people come to visit, they always have a take-away, like, ‘That was a fantastic museum. They have a nice performing arts theater. There are art pieces all over the place!’”

The recent Artfair Philippines that ran at The Link carpark in Ayala Center, its organizers say, is a testament to Ayala Land’s commitment to showing modern and contemporary visual art in a very accessible setting.

At present, the company awaits the completion of the P1.5 billion performing arts theater that will seat 1,500 people at Circuit Makati, an Ayala Land project that will be completed 2020.

“We want to encourage Filipino troupes and talents to perform,” she notes. “It would be incentivized enough to make them perform in our theater. That has always been the vision for Circuit.”

Blas says part of the company’s art-oriented “ongoing redevelopment” in the city were three “major nodes” that would blend art and architecture in building construction.

These include the “One Ayala” complex, a mixed-use building where the old Hotel Intercontinental used to stand; another construction at the tip of the Ayala Triangle; and a third at the City Gate complex near the Makati Medical Center.

Blas reveals that Ayala Land Inc. board chair Fernando Zobel de Ayala “has a personal hand in reviewing all the design, inside and outside, and landscaping all around these projects in order to make sure they are not just functional buildings that serve their purpose. From the outside, you would want to look at these as works of art.”

Blas adds that part of the dream is to see a Makati that would “attract artists to set up their workshops and galleries, so they become not just artists who put their art on display in the city but artists who live and work here.”
“If you look at the artist population,” Blas says, “the opportunity is to go and venture to a city like Makati to make a name and a mark and go places. You can’t really find that in new cities because they are too new. Also, not in old cities that do not have the dynamism of Makati.”