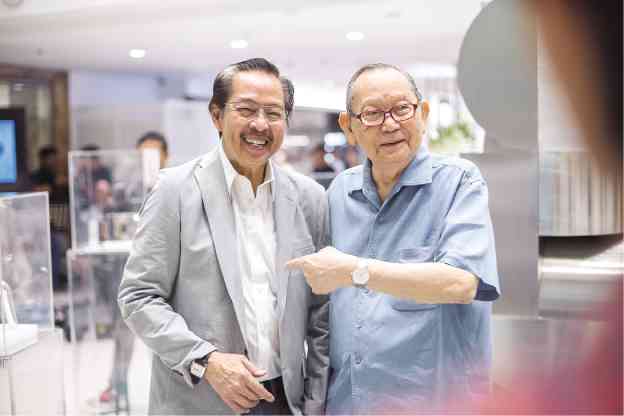 Arturo Luz (right) with Ramon Orlina, having a conversation about their work, in an undated photo

Somewhere in the middle of “First Light,” the retrospective of the works of Arturo Luz being shown at the Ayala Museum, hangs a painting titled “Man With Mask (Self-Portrait).”

Drawn in white on a field of black is a head that is recognizably the artist’s, thanks to the receding hairline and the distinctively shaped ears.

The eyes, however, are covered with a black mask. The “windows of the soul” are shuttered, rendering the face opaque and inscrutable.

Somehow, this only makes the portrait seem more accurate.

For despite having been named National Artist in 1997, and running the well-known Luz Gallery for more than four decades, the man that critic Cid Reyes once called “the éminence grise of Philippine art” remains one of the local art scene’s most enigmatic masters.

It is telling that “Man With Mask” was painted only six years ago, when the artist was already 84. (Luz turned 90 last November.)

It suggests that the notoriously reticent and media-shy Luz has only grown more enigmatic over time, while his work has become more minimal, his palette more austere, and his expression more direct as he aims for Da Vinci’s ideal of simplicity as the ultimate sophistication.

Ahead of the curve

Meanwhile, his reputation has continued to grow over the years.

A story goes that early on in his career, the artist once went for 14 years without selling a single work: so ahead of the curve was his thinking that it took a while for audiences to catch up with him.

Having abandoned figurative art early on in his career, Luz wrote about his aesthetic approach:

“It completes a cycle alternating between objective and pictorial reality. The transition from picture to painting is complete. We are fixed with an object which speaks entirely in plastic terms, with little or no reference to the visible world, where lines and shapes and colors are made to conform for their own sake, existing in a visual, created reality of its own.”

Thanks to the clarity of his conception and formal rigor, Luz’s work has aged much better than that of many of his contemporaries.

“His work is timeless,” says Sari Ortiga of the Crucible Gallery, which has exclusively represented Luz since the closure of the Luz Gallery more than 10 years ago.

“His is such a contemporary mind, you wouldn’t think that he was born during the time of the Moderns,” he continues, referring to the so-called “13 Moderns” who first rebelled against the conservative tendency in Philippine art: Vicente Manansala, Victorio Edades, Hernando Ocampo and their generation.

Although he is one or two decades younger than the original 13, Luz is in some ways the last Modern standing.

Ongoing at the Swatch Center in Makati is “Transformations,” an exhibit of Luz’s most recent works curated by Ortiga.

The exhibit is significant because it is Luz’s first since falling ill in late 2015 that saw the artist being rushed to the hospital on the verge of a diabetic coma.

“He had everything,” says Ortiga. “He says he hadn’t seen a doctor in 35 years.”

The hospitalization sidelined the normally productive and prolific artist for months. But eventually, he began to draw again, in pen and ink on bond paper, while still confined to his sickbed, hence the project’s working title: the “Hospital Series.”

Luz returned to favorite subjects—desert foliage, Asian temple architecture, landscapes—drawn as much by instinct as from memory, according to Ortiga.

The drawings then underwent the transformation suggested by the exhibit’s title. They were first photographed with a digital camera. The photographs then went to photographer Jason Quibilan, who reversed the images, enlarged them to their present size of 40 by 60 inches, and archivally printed them on the best German photographic paper available.

“When they were enlarged, we discovered something,” says Ortiga. “Arturo is famous for his perfect lines, but things have changed.”

In place of the near-mathematical linearity is a newfound freedom, the next stage in the continuing evolution of Arturo Luz’s art.

As the curatorial notes for the exhibit put it:

“It is in these serpentine lines that there is beauty, there is honesty, in that it feels like the artist has completely let go: that when once his work gloated about balance and perfection—here, there is a deep emotional catharsis in its imperfections. He calls them his ‘transformations,’ as if even the artist himself has acknowledged that the works are a complete detachment from himself, he knowingly accepts the fact that these are new pieces, that he is changed as an artist, as he is a changed person—and it is this kind of self-awareness that riddles each piece with pure significance.”

While discussing what to call the new works—were they mixed media? Monoprints?—Luz characteristically cut to chase and said, “Let’s not be pretentious,” recalls Ortiga.

The works in “Transformations” are called photographs, although only one print of each work, signed by the artist, exists. At P200,000 each, they are either very expensive photographs, or incredibly affordable work by a National Artist for collectors.