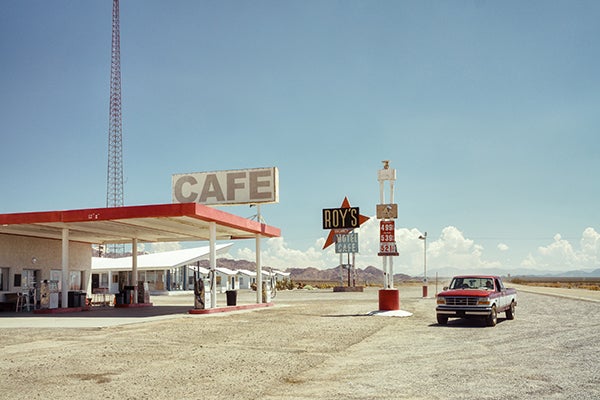 You can almost feel the heat and strength of the California sun on your skin if you gaze long enough at the award-winning travel image from the world’s largest photography competition.

In the Sony World Photography Awards, German photographer Ralph Graf took first prize in the category of Open Travel for his photo “Gasing Up At Roy’s”, which freeze-frames the iconic roadside gas station and motel in the California desert off Route 66.

Graf’s photo was one of 10 winning images selected from a pool of 105,000 single photograph submissions in the Open category of the Sony photography awards.

The winning photos were chosen for demonstrating “huge photographic talent and creativity.”

In the Open Travel category, Graf captures a red, white and blue color palette in the roadside attraction during a bright California day.

“With my color processing I have tried to capture the enormous August heat and atmosphere in Southern California,” Graf explained.

If the iconic Googie or futurist-style café looks familiar, it could be because the service station has appeared in everything from films (“The Hitcher” 1986, “Kalifornia” 1993) to music videos (“Hero” by Enrique Iglesias, and “This Is What It Feels Like” by Armin Van Buuren).

Other notable travel-related winners include a veritable trompe d’oeil aerial photo taken by Jianguo Gong, who captured 1,300 people practising tai chi against a geographic floor (Open Culture) and a photo freeze-framing a wintry ice-blue landscape by Hiroshi Tanita for the category Open Nature.

Winners received a Sony a7 II camera with lens kit, and will go on to be considered for the Sony World Photography Awards’ Open Photographer of the Year title, which will be announced April 20 alongside the winners of the Professional competition, who are judged on a body of work.

Winning photographs in the Open categories and National Awards, which honor the best single photographs of more than 60 countries, will also be exhibited at Somerset House in London between April 21 and May 7 as part of a special dedication to British photographer Martin Parr. JB