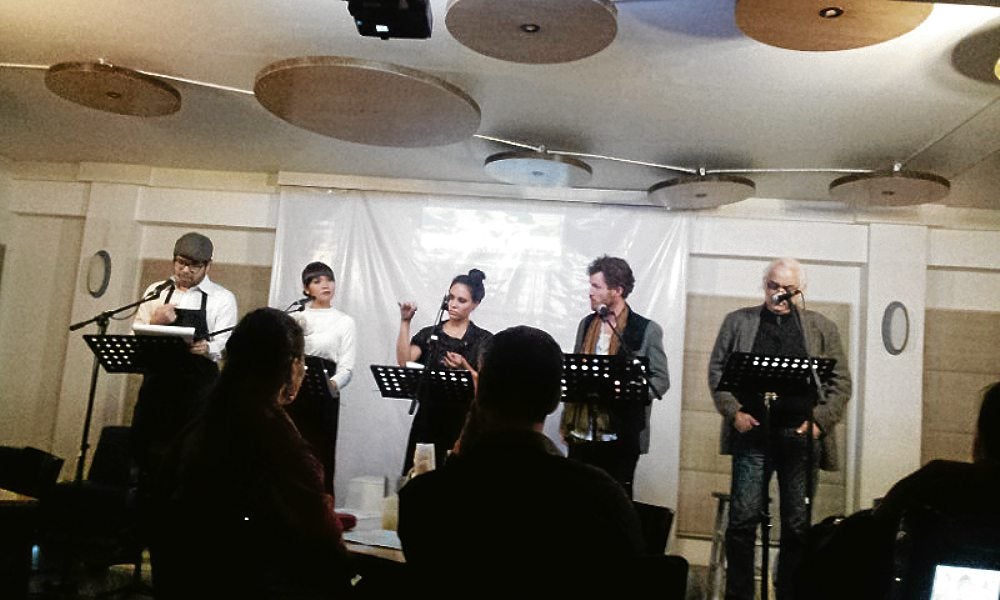 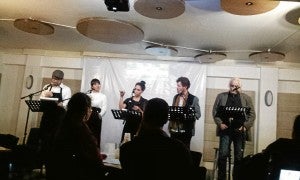 While musicals seem to be the default choice these days of many English-language theater groups in Manila, there are a few groups serving up straight plays—with food and beer.

9 Works Theatrical staged “Sweet Charity” a few months ago and has already announced its “You’re a Good Man, Charlie Brown” for next year.

Atlantis Productions wrapped up its rerun of “Next to Normal” and opened “Disney’s Little Mermaid” last week.

Groups have already announced its musicals for next year: Rep has “Jekyll and Hyde,” “The Wizard of Oz” and “Disney’s Camp Rock: The Musical.” Atlantis has “In the Heights,” “Rock of Ages,” “Nine” and “Shrek the Musical.”

On the opposite side of these big musicals, staged in big theaters usually preceded by months of publicity, there have also been several small-scale, stripped-down straight plays usually announced only days or weeks earlier.

And by some strange twist, all these “small” plays have been served together with food.

Word of Mouth (WOM) Theater Philippines presented, under its Play with Your Food (PWYF) series, a staged reading of Steve Martin’s “Picasso at the Lapin Agile” at Quantum Café in Makati. (The restaurant has been home to weekly performances by Silly People’s Improv Theater, more commonly known as SPIT.)

“Unlimited Text” had a one-night-only rerun at Quantum Café a few days after “Picasso’s” premiere.

The three groups didn’t make any plans to perform at dining establishments instead of theaters. Perhaps, though, some unspoken energy within the theater community spoke to the hunger of both artists and audiences for more straight plays—even if they got their fill only through excerpts and readings instead of a full production.

“Theater is not synonymous with musicals! Don’t get me wrong, I love musicals, but it’d be nice if we had a good number of straight plays to balance things out,” says Abad Santos.

“There is nothing like the text and the actor. It’s an opportunity to face your demons whether as artist or audience. A straight play just goes way deeper, this never-ending struggle to unearth all the possibilities in the written word. There is so much power there.”

“I get a lot of requests from actors to just hang out and read into the wee hours of the morning. We’d read plays we’ll probably never get to do. Just something for the soul,” adds Abad Santos.

“In the end, you need to be heard. ‘Unlimited Text’ materialized along with fellow actors Jenny Jamora and Topper Fabregas. We wanted to celebrate the text. We wanted to share our celebration of the diverse talent of Philippine theater actors.”

“Taumbayan is owned by fellow theater actors. We felt it was best to jump-start the series there. It also gives it that underground indie feel that we want. We’re open to performing in other places though.”

Jeremy Domingo, Word of Mouth Theater artistic director, says WOM’s PWYF is an experimental series that brings together “actors in a scenario fueled by the instinctive rawness and thrill of a first table read. It’s theater that’s more dangerous, more risky and less polished, which becomes a compelling experience for both performer and audience.”

“One of my most memorable experiences was joining Barangay Theater Guild’s (BTG) dramatic reading of Ladislav Fodor’s ‘The Vigil’ in 2006, directed by Daisy Avellana, assisted by her son, the late, great José Mari Avellana. It was evidence that a staged reading, with great material and seasoned performers, can keep an audience riveted for two hours.”

Crame-Rogers originated the role of Paula in BTG’s world premiere of “Portrait,” and acted with Daisy (as Candida) under the direction of Daisy’s husband, Lambert. And she carries on the tradition of sala theater through her group, even staging productions in her own living room.

She uses the opportunity to teach new theater practitioners.  “In our recent staging of ‘Portrait,’ there were five players who’d never performed before! They were shy and nervous, but now they’ve come to be more expressive and daring. They see better what being an actor is like because they’ve met the challenges and now have the ultra-vision of the actor,” says Crame-Rogers.

Domingo says: “We hope to promote staged readings as a viable, legitimate theater genre, as it is in many countries worldwide. This may be a way to bring David Mamet, Neil Simon, Tom Stoppard and other great playwrights, in addition to our local acclaimed and awarded playwrights, to the attention of a new generation of theatergoers.”

Do Filipino audiences (existing and potential) want to watch straight plays in English?

“Yep, they just don’t know it yet, ha-ha!” says Abad Santos. “On a more serious note, it’s not just ‘wanting.’ It’s like water, we need it. Even if sodas taste better.”