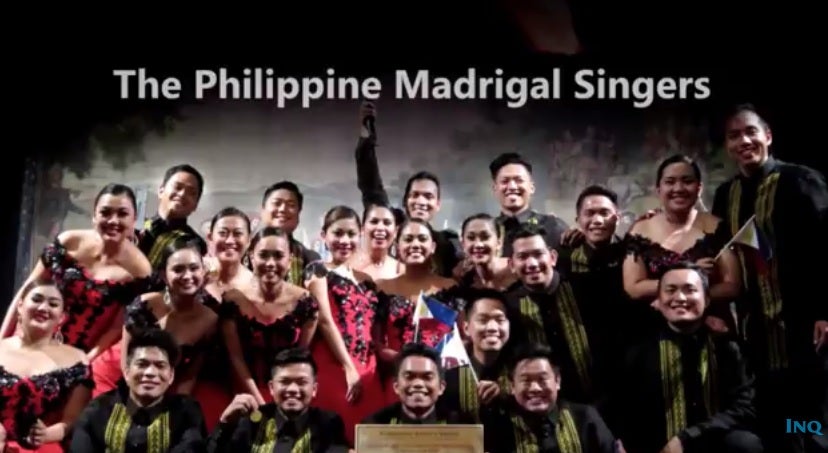 The Philippine Madrigal Singers staged a rousing performance at the Philippine Daily Inquirer office on Monday night that was streamed online on Facebook, Twitter, Instagram and INQUIRER.net.

It was the first time a performance of the multi-awarded choral group was viewed simultaneously on four social media platforms.

“Videos of our performances have been shared online in the past but this is really a first for us,” choirmaster Mark Anthony Carpio told Inquirer Lifestyle after their performance that lasted close to two hours.

The 19 performers—11 males and eight females in barong Tagalog and jewel-toned gowns, respectively—were seated in a semicircle at the office’s second floor landing. They sang an eclectic mix of songs ranging from church hymns (“I Will Sing Forever”) and Filipino classics (“Leron Leron Sinta” and “Gaano Ko Ikaw Kamahal”) to standards (“Moon River” and “I’ll Never Fall in Love Again”) and contemporary pop songs by John Legend and Bruno Mars.

The Philippine Madrigal Singers (or Madz as they are fondly called) was organized in 1963 by the late National Artist Professor Andrea O. Veneracion. The group is seen as one of the world’s best for being the first to win the prestigious European Grand Prix (EGP) for Choral Singing twice in 1997 and 2007. They hope to bag their third at the EGP for Choral Singing in Spain on Nov. 1.

Before they fly off to Europe later this year, however, they have a series of concerts scheduled in Davao, Cagayan de Oro, General Santos, Malaybalay in Bukidnon, and Iligan (April 20-26), and at the CCP (May 6-7 and May 26-28).

The Madz will then go on an Asian tour to Taiwan (June 10-21) and Indonesia (July 1-8) before heading back to the Manila on July 20-23 for the 3rd Andrea O. Veneracion International Choral Festival at the CCP.

With the direction of Carpio, the group’s corps of composers and choral arrangers continue to produce new compositions and choral settings of Philippine, Asian and international songs.