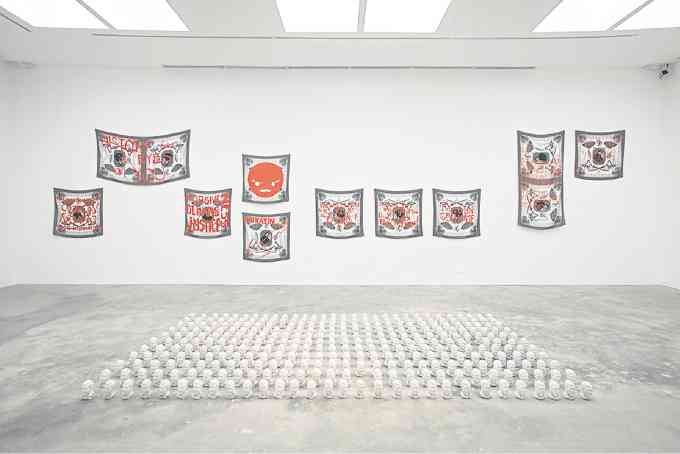 An ‘urgent’ show: Why Pio Abad is repeating images of history 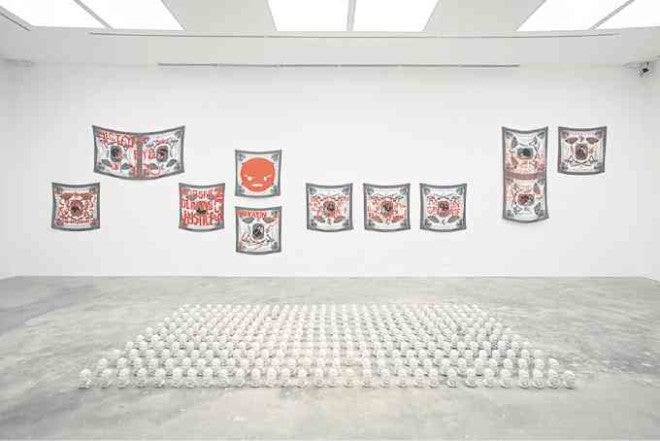 Pio Abad refers to the urgency and timeliness of reminding people of the truths about history—particularly martial law and its atrocities—as the reason behind his ongoing exhibit, “Counternarratives,” at Silverlens gallery. (It runs until April 29.)

The University of the Philippines (UP) Diliman-educated and now London-based artist does this by repetition.

The shocked expression of Ninoy Aquino as the bullet enters his head, Imelda Marcos in an erroneous portrayal as an Assyrian queen, and Ferdinand Marcos’ vandalized bust are isolated and rendered again and again to drill the images into memory.

Abad fears that the real stories behind the images might be forgotten or revised into someone’s self-serving tale.

He rings the alarm on current attempts at historical revisionism, more specifically the insistence of a noisy minority that Marcos was a war hero and thus deserved to be buried at the Libingan ng mga Bayani.

Abad says his second Silverlens exhibition “continues his engagement with Philippine political history… the problematic cultural legacy of the dictatorship in light of recent events to rehabilitate this dark chapter of the nation’s history.”

On one wall of the gallery, the artist hangs seven (Marcos’ favorite number) framed prints of the head-size image of the strongman’s defaced hillside bust.

Abad recalls the original concrete work was erected in Benguet in the 1980s at the height of what he calls Marcos’ megalomania. Ibaloi tribesmen residing in the area were shooed to give way to the construction of a 30-meter-high monument. It was eventually destroyed reportedly by treasure hunters looking for the wartime treasure believed to have been left by Imperial Japanese Army general Tomoyuki Yamashita.

Abad also pays homage to sculptor Anastacio Caedo’s piece, “Studies From a Forgotten Monument,” which stood at the corner of Ayala Avenue and Paseo de Roxas, Makati. It shows Aquino falling down the tarmac at the moment he was shot.

He rendered the sculpture’s head into the size of an angry fist and reproduced 327 pieces to represent the 3,270 victims of martial rule and abuse.

Abad explains that the Aquino assassination in 1983 was “a moment of violence but also of heroism. That incident turned him into a hero. It should be a moment we need to remember.”

The repetition is necessary, he stresses: “Repetition as remembering is very important… The worry is that we always forget. I used images that already exist in the people’s minds, a way for them to revisit and look at these images in a different way.”

In the final work, Imelda’s face is reprinted in 10 silk twill scarves made in the United Kingdom.

The story goes that Imelda was made to believe by an Indian mystic that she’s the reincarnation of the Assyrian queen Semiramis. But in an act of myth-making gone awry, a commissioned painting borrowed Egyptian Queen Nefertiti’s profile instead.

“This bizarre myth of reincarnation was among the many that scaled the heights of political fantasy and misrepresentation during the Marcos regime,” says Abad, “which continue to enthrall as they lead to political ruin.”

The artist emblazoned the scarves with political protest signs. He points to a trio quoting placards made by the artist David Medalla, like one saying “A Bas Las Mystification! Down With The Philistines!” that Medalla held up at the opening night of the Cultural Center of the Philippines in 1969.

A more current scarf message warns that “History Has Its Eyes on You,” something Abad borrows from the Broadway hit musical “Hamilton.” He says the line is relevant to the times and can be considered an anti-revisionist sentiment.

Abad has two other ongoing exhibits—“Recourvrir, Ensabler, Copier, Traduire, Restituer” in Paris that runs until April 16, and “Soil and Stones, Songs and Souls” currently at the Para Site gallery in Hong Kong.

“Counternarratives” is taken from an anthology of American author John Keene that draws upon “multiple accounts—memoirs, newspaper articles and speculative fiction—to offer new perspectives on the past and the present.”

Abad says he used the same approach by “translating stories from historical residue into images and objects that reflect on acts of mythmaking, monumentalizing and forgetting.”

“Remembering cannot be an afterthought,” he tells Lifestyle in an exclusive interview. “It has to be a really active force. We should do it now because things that you think were set in stone are being changed right in front of you.”

Abad again emphasizes his warning against revisionism. “Unlike Romania and the experience with dictator (Nicolae) Ceausescu, we were unable to institutionalize (our) memories. My project is to create these sights for remembering… What I find interesting is that things that you used to think before as fragments of the past now look like what the future might be.”