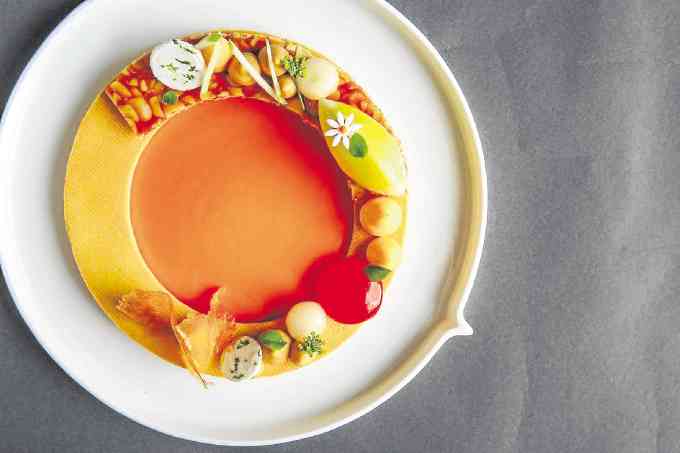 The party has begun even before Madrid Fusion Manila started. Days before the third installment of the international chef’s congress, special dinners have been held that beautifully illustrated what the concerted and collective efforts of chefs could accomplish—meals that celebrated not just their talents and respective cuisines, but also their generosity.

A good number of chef collaborations happen during the Madrid Fusion Manila.

In previous years, there were William Mahi and Jungsik Yim, Virgilio Martinez and Yoshihiro Narisawa with Chele Gonzalez, and Paco Roncero with Margarita Forés.

The collaborations kicked off early this time, starting with the Cross Cultures’s Cure x Hey Handsome dinner held the last week of March.

Though none of the chefs will take the Madrid Fusion Manila stage this year, the two-night affair had the value and flair of a “dinner with the stars.” The menu proved this: new harvest mushrooms with Kaffir butter and cultured cream, BBQ mackerel with green curry and coconut rice, foie gras crème brûlée, Peking duck with coconut porridge and fermented durian, 72-hour sous vide beef short ribs with burnt cabbage and egg sauce, and hula bali ice cream with roasted soy bean and passion fruit.

Given their experience and familiarity with Asian food, the two chefs, Nicco Santos and Andrew Walsh, were a match made in food heaven.

“It was great working with him,” said Santos of Walsh. “I learned a lot on how to create a system to execute course-style menus. I had eaten at Cure when they opened. The food was awesome. The vibe was different compared to Esquina, but you still feel Andrews’ presence and energy throughout the dining experience.”

One of the major events before Madrid Fusion Manila is the tapas night hosted by the Embassy of Spain in the Philippines.

This year’s event at Green Sun Hotel on April 1 was a big cocktail party that presented the best of Spain—
jamon Serrano, manchego and wine, as well as some of the chefs who originated from that country, such as JC de Terry of Terry’s Selection, Gonzalez of Vask, Carlos Garcia of Black Pig, Nicolas Diaz of Barcino, Amado Fernandez of Pablo Bistro and Edgar Sanuy of La Lola Group.

They were joined by Jordy Navarra of Toyo Eatery, Margarita Forés of Lusso and Grace Park and Miko Aspiras of Freezer Burn and Scout’s Honor.

Divided into three groups, the chefs produced a spread of tapas that flaunted their creativity. There was tuna marmitako, gazpacho with watermelon and prawn, Capiz scallops with chistorra crumble and pepper mostarda, fabada Asturiana, empanaditas, baby goat trotters in tempranillo and Rioja pepper sauce, and chocolate and raspberry crispy torrijas.

Even before the notable chefs impressed everyone with Spanish specialties, guests had a generous sampling of jamon from Cinco Jotas, croquettes and a wide array of cheeses. Good wine flowed, food streamed out of the kitchen, and the night delighted over 400 people in the industry, proving once more that the annual tapas night is worth anticipating year after year.

Some of the country’s young and promising pastry chefs were not left out, with Aspiras, Kristine Lotilla and Sunshine Puey teaming up with Top Chefs Desserts alum Sally Camacho.

The degustation started with savory pass-arounds by chefs Noel Mauricio and Richie Manapat. A blue cheese crostini topped with an aburi oyster, and another with Camembert and caramelized apple, set the tone for the evening.

The tables were decked and decorated with fougasse, which guests happily pulled apart and ate with flavored butter and a duo of dips—raclette and spinach, and tomato and cheese.

It was followed by a well-balanced succession of sugary treats that included cookies and milk, prosciutto and Brie grilled cheese sandwich, duck chicharrón with cabana cremeux and milk chocolate, and a spectacular chocolate finale, which all the chefs had a hand on.

Held at Le Petit Souffle at Mega Fashion Hall, the Dessert Dialogue, which is part of the Flavors of the Philippines, was an intimate event, each chef presenting dishes that had a personal story or meaning in their lives, and which they shared with guests in a memorable culinary conversation. —CONTRIBUTED