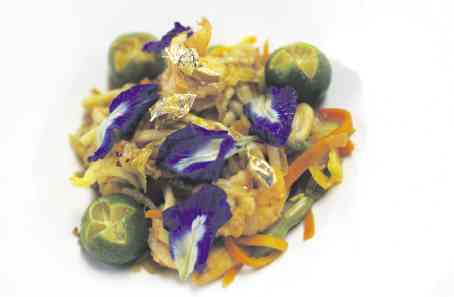 Not even World War II was able to stop the annual feast of the Ascension at Villa Escudero, a prominent coconut plantation in Tiaong, Quezon.

Held 40 days after Easter, the fiesta has always been held with pomp and pageantry by the Escudero family. Amid the embargo on imported food, including noodles, during the war, Don Conrado, the patriarch of this landed family, and his cooks came up with noodles using fresh strips of young coconut meat.

Villa Escudero’s pancit buko is made of coconut strands topped with bits of chicken, chicken liver, pork, juicy shrimp meat, cabbage and green beans. Blue ternate flowers, abundant in the plantation, add zap to the plate; a tinsel of edible gold foil is suggestive of the Escuderos’ social status.

This Southern Tagalog dish recently represented the noodle section of the Filipino Food Taste Workshop at the 7107 Culture + Cuisine restaurant at Treston International College. Chefs from other parts of the country were also tapped to prepare a dish that represented their native origins, or used products that were indigenous to a region.

The dinner capped the first Filipino Food Conference and Taste Workshop organized by the Philippine Culinary Heritage Movement (PCHM), an event that celebrated the distinctiveness and diversity of Filipino foods.

“Our work at PCHM has been always about preserving Filipino cuisine. We believe that educating people, especially through the palate, is the best way to preserve our culinary heritage. This type of activity can jumpstart the initiative for more in-depth studies of our local gastronomy,” said PCHM president chef Jam Melchor.

The dinner was a culinary journey that showed modern ways of plating traditional foods while preserving their flavors.

The tastebuds got a kickoff with Patrick and Pia Roa’s signature citrusy kinilaw. It was spiked with lime, tabon-tabon (a bitter medicinal fruit from Mindanao), cucumber and
siling labuyo.

Their binakhaw, the Dumaguete version of kilawin, was flavored with dungon seeds, green onions, red chilli, cubed tuna and pork cracklings for crunch. The Roas, from Cagayon de Oro, set up the metro’s first cevicheria, Patricio’s, in Bonifacio Global City.

Sharwin Tee, host of the reality show “Curiosity Got the Chef,” recalled his childhood memories of a broth made with such Chinese medicinal herbs as the angelica root or tong kui; ginseng, wolfberry, lingusticum and shiok te. Every week, he was given this formulation as a tonic for the blood and internal organs.

The Sibut Tang soup was his homage to his roots; it had native chicken instead of black meat, and pickled mustard instead of the traditional heavy salted mustard. The atchara (pickled mustasa) lightened up the recipe.

“Instead of bitter soup, I balanced its sweet and savory flavors with just a hint of bitterness. It’s more Pinoy, ” he said.

“What could be more Davaoeño than pomelo salad?,” he said. The salad was a melange of sweet pomelos and smoked malasugue with pomelo vinaigrette perched on a pool of mango mousse. It was dressed with local sukang tuba from fermented pomelo juice and flecked with moringa buds.

Ilokano chef Chris de Jesus of Provenciano from the Teachers’ Village restaurant row paid tribute to famous dishes from the North. The garlicky bagnet or crispy lechon belly was distinguished by the mild aroma of the leaves from the karimbuaya, or milk hedge, a medicinal plant.

“The karimbuaya is a cactus variety that’s abundant in the north. It brings out the flavors and fragrance and complements garlic,” explained de Jesus. The fried meat was used in other Ilokano side dishes such as dinoydoy, made of mashed squash with onion and garlic, and poque-poque or smoked eggplant with sautéed tomatoes.

Then there was the Ilokano standard fare of KBL (kamatis, bagoong isda and lasona) or tomato, fish paste and purple onions.

“You get the sour and sweet taste of pickled shallots, which is very Ilokano,” said de Jesus.

Niño Laus of Ninyo’s restaurant worked with the basic Pinoy ingredients of soft-shell crab, iningkanto rice and kamote tops. The crab was prepared rebosado style or fried in light batter, and made to rest on a block of crisp, miso-infused black rice that was a nod to the Kapampangan tamale.

The pickled camote tops added tartness. The sauce of the seafood trimmings was incorporated in the guava curry emulsion. For flair, Laus added a slice of guava poached in coconut wine and micro greens.

Chef-consultant Arnold Bernardo updated his grandmother’s heirloom recipe of pinatisang manok , chicken stewed in fish sauce. After marinating the native chicken overnight with paprika and fish sauce, the meat was prepared in a classic sofrito, a Spanish sauce made of sautéed onions, garlic and tomatoes.

Bernardo’s grandmother used to add Chinese chorizo. The chef pointed out that annato was used in his lola’s time. He now spruced up the dish using smoked paprika.

Ice cream was the palate cleanser. Ian Carandang, founder of Sebastian’s Artisanal Ice Cream, made ice cream that celebrated the unique local flavors of ube and tugi (purple and white yams) and dark sticky rice with latik or caramelized coconut cream syrup, instead of the traditional caramel.

Aside from prominent chefs, the dinner also tapped Kalel Demetrio, dubbed the “Liquid Maestro.” He has been collaborating with Destileria Limtuaco on how to use its signature Philippine crafts spirits.

Demetrio concocted Gayuma, a cocktail of coconut wine, calamansi liqueur, bitters with cucumber, basil and rosemary. To lend a sense of history, a non-
alcohol beverage was made from hibiscus, ginger, lemongrass, pandan and the anise-flavored kalumata extract. These kalumata leaves are found near the old churches of Bulacan.

PCHM and Department of Agriculture are hosting  “The Philippines on a Plate”  at the Expo Hall of SMX Convention Center Manila today,  11 a.m. to midnight.