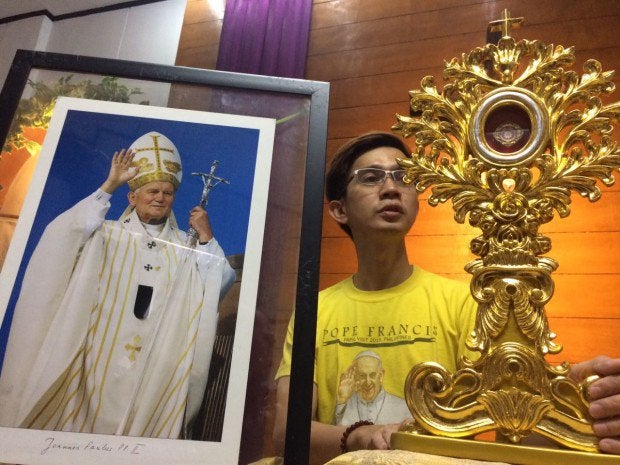 Twelve years have passed since his death, but the presence and influence of Saint John Paul II in the hearts of the Filipino faithful is still very much alive today.

A first class blood relic of the popular pope is available for public veneration at the Our Lady of Veritas Chapel in Quezon City until April 7, and 66-year-old Lourdes Dequiña considered it nothing less of a “miracle” to be able to face a part of her favorite saint.

“It is really a miracle. I was supposed to go to Mass to another church where I go every day. I just happened to be in the area, downstairs, and of the men told me that there’s a relic of Pope John Paul over here, so I was surprised,” she said in an interview.

Dequiña, whose grandfather was also of Polish descent like the late pontiff of 27 years, said she saw John Paul II when he visited the Philippines twice—when he beatified Saint Lorenzo Ruiz in 1981 and during the World Youth Day in Manila in 1995. John Paul II, born Karol Wojtyla in Poland, was the first non-Italian pope in over 400 years.

“When he was here, it was very miraculous… My grandfather told me that my mother is very much devoted to Pope John Paul II and to our Lady, and so am I. I really like him. He has a very long reign because he was really good, and he’s a really godly man so I admire him. He’s very loyal to our Lord and to Our Lady which I am also very much devoted to,” recalled Dequiña, whose middle name is Bialoglovski.

“Pope John Paul II is a very miraculous man. Even in Rome, they say that when he gave blessings, so many people were cured. There were so many miracles even before he became a priest. I saw him personally and it was as if you’re in heaven, and you would get goosebumps like that. He’s really gifted, and it’s very rare to find a gifted man. So when he became I saint, the more I prayed,” she added.

Saint John Paul II, the longest-serving Pope in modern history after Pope Pius IX, was ordained priest in 1946. He became the bishop of Ombi in 1958 and later the archbishop of Krakow in 1964.

Fr. Anton Pascual, president of the church-run Radyo Veritas, said the veneration of the relic was important so that the faithful may “find God in all things” and be closer to Him.

In time for the Holy Week, Pascual said the presence of John Paul II’s relic offered a message of hope to Filipinos amid their personal problems and the many difficulties being faced by the country, such as poverty and violence.

Another devotee, 70-year-old Erlinda Sollano of Cebu, also recalled her spiritual conversation with the saint, who she said inspired her to write a booklet on catechism for children. Like Dequiña, Sollano said being able to venerate the saint’s relic was “God’s plan” for her.

“I saw it in the papers but I don’t know where Veritas chapel was so my daughter in law looked for it in the internet but she could not find it also. So we really had a difficult time to come here. It was really God’s plan that we were able to attend the Holy Mass,” she said. “This is God’s plan. I never thought that I will be here right now.”

Sollano said she has been praying to John Paul II for wisdom so she may publish her other religious themed books.

Dequiña said she sought John Paul II’s intercession when she was sick from high blood pressure and also to cure her nephew of drug addiction. She said he was now a “completely different man.”

Asked what she would ask the saint if she encountered him face to face, Dequiña said she would ask John Paul II’s intercession for the healing of her siblings who are with breast cancer and a heart ailment, and a peaceful death for herself when her time comes.

“As Filipinos, we must be very godly like Pope John Paul II, and we must be very much devoted to our Lady and to St. Joseph. We must do charity to the poor, and have strong faith in God. Because your obligation, if you are rich, the first thing you must do is charity to the poor to inherit the Kingdom of heaven. And that’s what John Paul does. When he was with people, it didn’t matter whether you’re poor or rich. People like that are really gifted. All my prayers have been answered through his intercession,” Dequiña said.

“Most of my friends are really devoted to him and so am I. And I hope and pray some day in the future maybe I will have a very happy death like Pope John Paul II,” she added.

Pascual called on the faithful to reassess their spiritual lives, take a page from the life of St. John Paul II and live a holy life of their own with love for humanity.

“Your life is not all about you. Your life is about God. And this Holy Week, we are in the orchestra ng dakilang drama ng ating kaligtasan at gaano tayo kamahal ng Diyos hindi lang sa Kanyang pagpapakasakit at pagkamatay at muling pagkabuhay. Let us show our love for God who loves us. At ang buhay talaga natin, sa totoo lang, ay sa Diyos,” Pascual added.

Devotees can venerate the “Ex-Sanguine” (from his blood) first class relic from March 31 to April 7, from 8 a.m. to 5 p.m.  The Our Lady of Veritas chapel is at at the Veritas Tower, 162 West Avenue corner Edsa in Quezon City. CBB