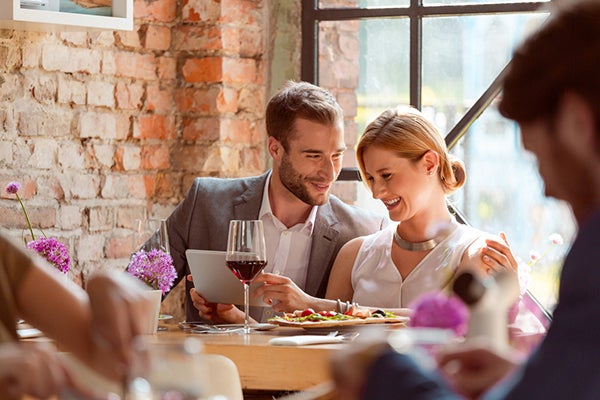 According to the results of a new dating and dining etiquette report, one in three singletons make up the Joey Tribbianis of the dating world: those who don’t share food.

If you identify with the “Friends” character, who famously “doesn’t share food,” date or no date, you may be part of the 31 percent of respondents in a Grubhub and Tinder survey, who said dates with sticky fingers who steal food off their plate would get a “scowl” of disapproval.

A more generous 69 percent of singletons, meanwhile, said they would be willing to push their plates closer to their date and share.

Results from the survey, which polled 2,000 people across the United States via the Tinder dating app, also suggest that dating and dining etiquette is breaking away from outmoded stereotypes with a new generation of Millennials dominating the dating scene.

For instance, when asked what kind of meal they’d order on a first date, the majority of respondents (62 percent) said they would opt for a heartier dish, compared to 38 percent, who said they prefer a lighter meal—a perhaps surprising result given jittery nerves and subdued appetites that normally come with first dates.

But with online dating and mobile swiping, it could be said that modern-day singletons are well-practiced speed daters and no longer feel the need to coyly hide their appetites in front of potential partners.

When it comes to picking up the tab, 36 percent of respondents said they’d rule out a second date if the other person didn’t offer to pay, while 64 percent said it’s a non-issue. No gender breakdown is offered.

And if you don’t know how to use chopsticks, best hide this handicap from your date, as more than half (56 percent) of respondents said seeing their date pick up sushi with a fork would be “cringe-worthy.”

The other half is more forgiving, however, and said it would be “adorable” to see.

Grubhub is an online and mobile take-out marketplace. JB