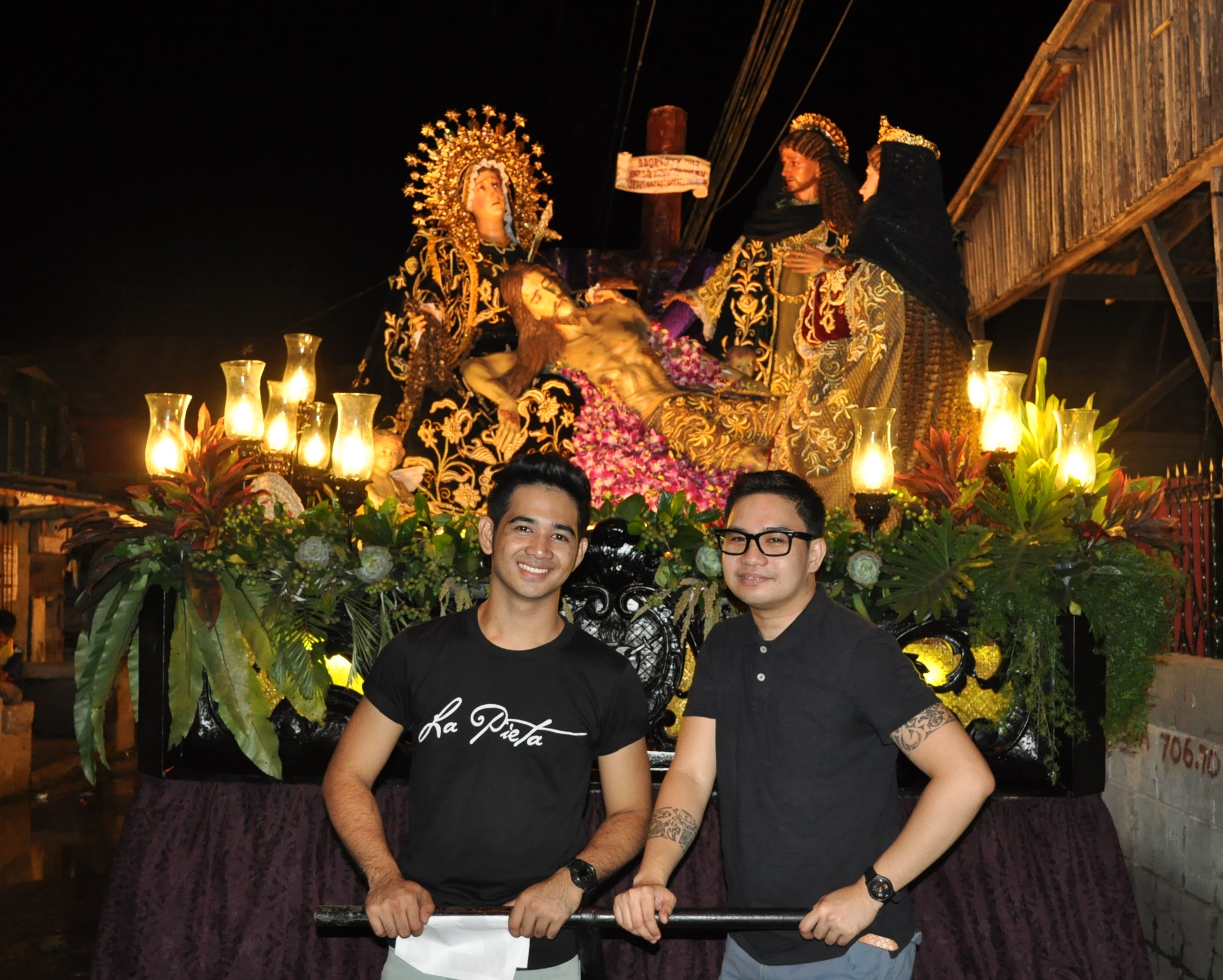 Dulaang UP artistic director Dexter Santos (right) with his nephew Jhapett Raymundo, who regularly helps him dress the “santos” before the annual procession; behind them is a “carroza” that has been with the family since 2004.—ALL PHOTOS FROM DEXTER SANTOS

To this day, Santos attributes his theater roots to Semana Santa, recalling that his young imagination would create dialogues as each carroza bearing a Paso de Palio (tableau or scene from the life of the Virgin Mary) or a Paso de Misterio depicting a moment from Christ’s Passion stopped in front of the family’s veranda.

Santos’ paternal grandmother had one rule to all family members for important occasions like Christmas, fiestas and  of course, Holy Week—be present in the family home in Sto. Rosario, Hagonoy, Bulacan.

Lent became Santos’ “favorite time of the year” because of the annual procession of carrozas. Santos and his cousins prayed that their family would someday have its own santo to join the procession.

Lola eventually asked her nine children to help out in shouldering the expenses for a Virgen Angustia (Our Lady of Sorrows), including the funding for its own carroza, a generator for the light fixtures and flowers.

The young Santos was “ecstatic.” Since then, he would clean the family’s carroza as Holy Week approached and be among the “pullers” that would transport the carriage as it joined 40 others in a procession that wrapped around six barangays in five hours.

“I would also bring this long bamboo stick to lift any (electrical) wires (obstructing) the cross of the carroza,” he recalls. When Santos began working, he always put away a part of his salary for the flowers that would festoon the Holy Mother.

Santos later decided to commission his own image of La Pieta, depicting the sorrowful Mary embracing the body of the dead Jesus, with its own carroza.

Armed with his savings, Santos asked an uncle and his friend to help him look for a sculptor.

“Iba na pala ang presyohan,” he noted in shock after finding one in San Luis, Pampanga. Still, Santos told the sculptor to begin with the image, thinking he could deal with the carroza later. After a week, he got a call saying a project, the proceeds of which he was earmarking to pay the sculptor, had been cancelled.

Two weeks went and Santos was offered another project that allowed him to pay not only for both image and carroza, but also for a brand new generator, vestments and more.

The director also recalls that his youngest uncle, who was tasked to take care of the family’s Virgen Angustia, was blessed with three children after Our Lady’s primera salida or first procession. This after the uncle and his wife waited 10 years for a child.

Santos calls himself a “santero,” a term proudly worn by devotees who collect and take care of beloved religious images.

“Taking care of a religious image requires utmost care. Cleaning must be done at all times in a delicate manner. I also make sure that the vestments, metal works and other accoutrements are properly stored,” he says.

To date, he has 11 images—seven of them commissioned, two from director Floy Quintos’ Gallery Deus and two more gifted by close friends.

The santos are displayed in the family’s living room in Quezon City and are transported to Malolos and Hagonoy in Bulacan and to Intramuros, Manila on significant religious events.