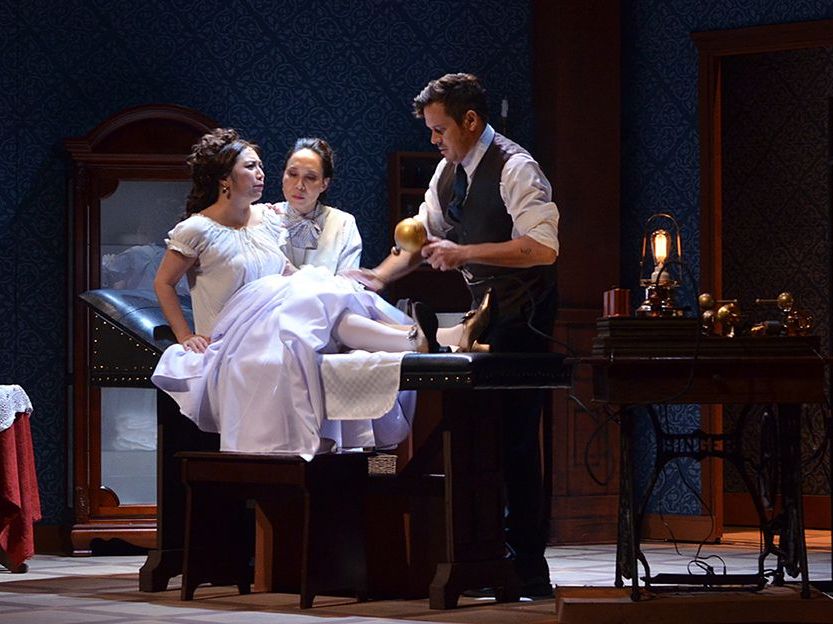 The emancipation of women from their societal shackles is the undercurrent that runs throughout this play, as it did “Eurydice,” another Ruhl play that was staged a few weeks ago by Tanghalang Pilipino.

The author fights for her characters in broad emotional strokes that slowly open up the longings of their hearts long before the other players around them, like the men, realize it.

The success of his treatment soon brings in other patients, including, surprisingly, men like the bohemian artist Leo (Jef Flores).

Ironically, Givings’ own marriage needs saving. However, the brilliant but cerebral scientist is too busy and emotionally cold to notice the loneliness of his own wife Catherine (Giannina Ocampo). It doesn’t help that, except for Leo, the gentlemen in this play usually equate sex with duty, without the sweep of romance the women desire.

The vibrator’s electric light soon illuminates emotional and relational illnesses, its role as a so-called solution to the women’s melancholy in this play drawing the expected ribald, giddy laughter from the audience. But much of Ruhl’s humor is nuanced and poignant; the overall effect is bittersweet sympathy for the Givings and their guests.

The set design by Mio Infante is more than just the usual backdrop that comes with a single-setting play. It captures the characters’ societal prison—proper, prim, formal, elegant, but ultimately staid and lifeless. Bonsai Cielo’s costume design, faithful to the era, slyly reflects the physical and emotional layers the people of that time have to put on to play their designated roles.

When Millado makes the scenery disappear in the final scene, the absence reinforces the liberation the lead characters finally attain.

Spafford dominates the play as the dichotomized doctor who can touch women’s most private parts but remain unaffected by them. The crumbling of his professional, detached exterior at the end, played with beautiful understatement, makes for a stirring emotional payoff.

Ocampo has much more to do with her character, and finding that balance between 19th-century rigidity and her “rebellion” into freedom could use a little more fire (we watched on the first weekend—perhaps she’s found her groove by now).

So could Cara Barredo’s Elizabeth and Flores’ Leo. Leo’s gallant charm is persuasive enough to sway the ladies, but the energy is still too diffused to persuasively shock the Givings’ household out of its  complacency. That role needs that kind of firepower if the audience is to believe that the husband of Elizabeth (Barredo), the Givings’ wet nurse, would eventually ban her from visiting that household.

Barredo’s African-American nurse does the submissive aspect spot-on, but it smothers the required earthiness that’s supposed to make a her a more confident woman in her sexual life, and that her more affluent mistresses could only envy.

Borromeo’s Sabrina would have given her right arm for that kind of sexual fulfillment. The actress’ vulnerability, mixed with a bit of feigned haughtiness and deadpan curiosity, tends to make her shine in her scenes. Eckstein does well in the conflicted gentleman role he has played a dozen times. Monsod’s one revelatory scene, after almost three hours of token nurse lines, shows again that there are no small roles for good actresses.