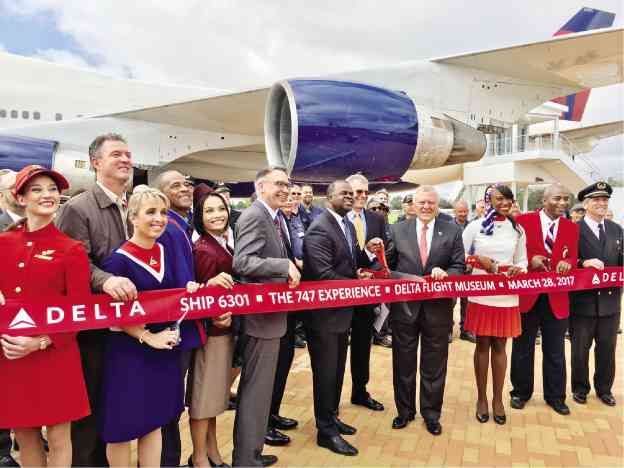 ATLANTA—The first “Queen of the Skies” may have retired, but she’s not quite quietly riding off into the sunset. Even in retirement, she’s once more ready to accept guests—albeit this time, it’s not to ferry them to long, physical distances, but to take them on a nostalgic ride.

Delta Ship 6301, built in 1988, was retired on Sept. 9, 2015, after logging 61 million miles and ferrying roughly 4.9 million passengers, as part of the airline’s move to modernize its fleet with more fuel-efficient aircraft.

Delta inherited Ship 6301 from Northwest Airlines following the two companies’ 2008 merger. The 747-400 is a spawn of the first-generation jumbo jets, built in the late 1960s, and is fondly called “The Whale” by pilots and aviation enthusiasts for its iconic and distinctive hump design.

Unlike another popular aircraft exhibit at the museum, the sentimental “The Spirit of Delta”—the Boeing 767 that was famously acquired through employees’ fundraiser and donations when the airline suffered a slump, and was retired in 2006—“747 Experience” is more of a tribute to the revolutionary design of the aircraft.

Visitors are allowed an intimate look into the internal workings of the aircraft, with parts of its underbelly exposed, via a see-through glass that shows large ducts, air filters and electrical wirings beneath, as well as a fuel tank and lavatory waste pipes. The ceilings are also exposed, revealing more technical wirings and insulation.

A patio has also been created to allow visitors a “wing walk”—the 747-400 has a wingspan of 211 feet. On the upper deck, where part of the business-class (Delta One) seats were located, visitors can also walk all the way to the cockpit, and the pilot’s resting area adjacent to it.

“The ‘747 Experience’ will provide a look into the history of this iconic ship,” said Boatright. “It was a technological wonder when it was placed in service in 1989, and it will remain a technological wonder for years to come. We hope this exhibit will educate and inspire current and future generations to get involved in aviation.”

For many years, the Ship 6301 traveled regularly from its United States hubs to long-haul destinations like Manila, Tokyo, Shanghai, Seoul.

“I flew on that plane on so many flights to Manila,” a flight attendant, who’s a 43-year veteran at Delta, told this writer. “My son has just started to learn how to fly, and I can’t wait to bring him to the exhibit.”

“While in some ways it pangs in our heart that we’re retiring such a beautiful and important aircraft, it’s also opening a new chapter as we bring on new state-of-the-art airplanes with even more amenities, services and comfort and better fuel economy for a greener and brighter future,” said Hauenstein at the inaugural.

Delta inherited 16 747-400s from Northwest, and all seven remaining will be decommissioned by end of the year.

Like other airlines, Delta has started replacing its 747s with more fuel-efficient, two-engine aircraft, marking the end of an era for jumbo jets. The four-engine 747-400 had, at Delta, a seating capacity of 376, flown by two pilots, with an 11-member flight crew. Its replacements, like the B777-200ERs and A330-300, have each nearly 100 less seats than the 747, but consume about 20 percent less fuel.

The 747 was built as a response to the aviation industry’s demand for a faster, wide-body jet that could ferry more passengers and freight. Its hump design was intended to elevate the cockpit above the main deck, thus allowing for easier front loading of cargo. Its wide fuselage also efficiently stored cargo containers, and meant increased revenue potential for airlines.

The key to safety, Sutter believed, was about redundancy. The system had backups, and backups of backups, in case one failed. Quadruple redundancy was employed in the flight controls, flight surfaces, avionics, main landing gears.

While many who have flown a 747-400 remember the upper deck as the business-class cabin, it was originally designed as a lounge space with only three windows. Pretty soon, airlines wanted the area to accommodate passenger seating. Boeing sold 694 747-400s from 1988 to 2009.

Delta Ship 6301 had its final flight on Sept. 9, 2015, from Honolulu to Atlanta, after logging a distance equivalent to 250 trips from the Earth to the moon.

On April 30, 2016, the first “Queen of the Skies” was hauled to her permanent plaza here, and within a mile of the world’s busiest airport, where she continues to watch, from her throne on the ground, other aviation wonders take flight.