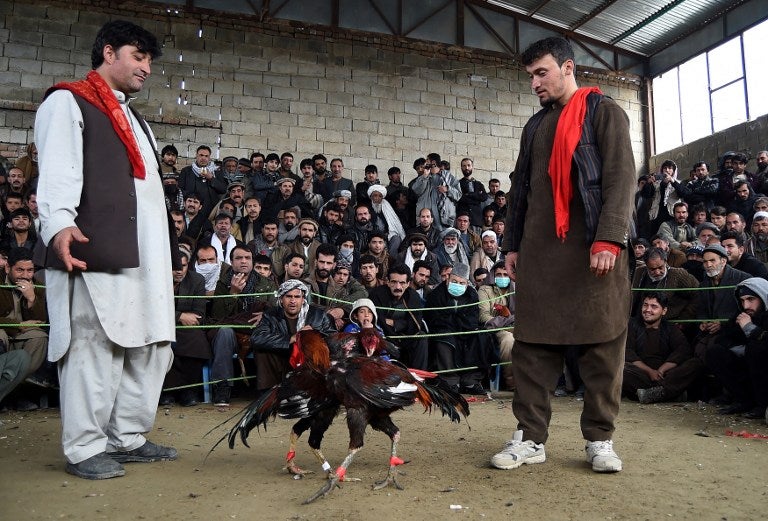 In this photograph taken on February 24, 2017, Afghan men watch roosters spar in a fighting ring on the outskirts of Kabul. A boisterous roar sweeps through the crowd as a pair of roosters spar in a sandy pit, their spurs kicking, wings flapping and beaks pecking. / AFP PHOTO / WAKIL KOHSAR / TO GO WITH AFP STORY Afghanistan-unrest-roosters-sport,FEATURE by Anuj Chopra

KABUL, Afghanistan — A boisterous roar sweeps through the crowd as a pair of roosters spar in a sandy pit, their spurs kicking, wings flapping and beaks pecking.

“Bizan! (Hit it),” one spectator barks in Dari.

“Bokoshesh! (Kill it),” hisses another.

Cockfighting, known in Afghanistan as “Murgh Jangi”, has the trappings of a gladiatorial contest.

Wings outstretched, the avian fighters tear into each other as bets furiously exchange hands. Feathers are shredded and blood is drawn.

In a few seconds, it is over. One bird collapses and half of the baying crowd lets out a roar of triumph.

Cockfighting, like all animal fighting and gambling, was banned under the Taliban’s 1996-2001 rule. But the gory bloodsport, a symbol of masculinity and virility, has since made a swift comeback as a popular winter pastime in Afghanistan.

Kabul’s biggest amphitheater for cockfighting is tucked away behind the bombed out ruins of the historic Darul Aman Palace, an enduring symbol of the destruction wreaked by decades of conflict.

Outside, opium addicts swaddled in wrinkled shawls crouch along the walls.

Inside, there is tiered seating for two groups of rooster owners, bloodsport enthusiasts and imperious Godfather-like figures recording gambling bets in crumpled notebooks.

“People may not have food to eat, but they come here to bet,” said spectator Muhammad Humayoon, a private telecom company operator. “I have seen very poor people walking out rich.”

But it is not just about money.

As rampant joblessness and a roiling conflict spur pessimism about the future of the country, ancient bloodsports —- however brutal — offer a sense of beguiling escapism.

From cockfighting to quail fighting to buzkashi — polo with a headless animal carcass —- Afghanistan’s violent pastimes are redolent in some ways of the tumult that the country has experienced in four decades of war.

But unlike war, cockfighting is a contest of equals.

Only birds of the same size and weight are paired against each other in a fight while the taped-on spurs attached to their claws to inflict damage on opponents have to be equally sharp.

In between the bouts, owners cradle roosters beneath woollen shawls, their puny claws dangling below, feeding them energy drinks directly from an oral syringe.

Others delicately swab their injuries with moist sponges. Some perform improvised surgeries —- gluing together cracked beaks, stitching together broken feathers and sucking out clotted blood pooled in the necks of their fowls.

Hawkers move through knots of people, selling boiled eggs and dried beans with sprinklings of salt.

‘Not money but pride’

In a country where women’s groups voice a shockingly common refrain to be granted the same basic dignity given to animals, the birds are sometimes treated even better than family members.

“We feed them everything we cannot afford to eat ourselves — anar (pomegranates), kebab, grains, almonds, pistachios,” said a 29-year-old rooster owner, requesting anonymity.

Training begins at an early age, with no expense spared to ensure that they win.

The owner demonstrated to AFP how his roosters are made to jog to improve their lung capacity — around the enclosure of a hen. Roosters, like men, who are otherwise clumsy tend to be more disciplined around females, he joked.

But fighting roosters rarely live past the age of three and many do not survive their first bout. Birds do not usually fight to the death, but they can be blinded and sometimes bloodied with fatal injuries.

“Cockfighting (is) illegal in many parts of the world, and if Afghanistan wants to be seen as a progressive nation, it should follow,” Jason Baker, from People for the Ethical Treatment of Animals (PETA), told AFP.

“What does it say about humankind, when a stadium full of people is bursting with boisterous applause at the death of an innocent animal?”

But it is unlikely to be prohibited in a country where the concept of animal welfare barely exists.

“Cockfighting is part of our culture,” said Karim Langari, an elderly rooster owner. “Even under the Taliban cockfighting happened in secret locations.”

Foul play is common and cockfights can easily devolve into gunfights or knife fights amid disagreements between rival teams.

With the owner’s money and reputation at risk, even roosters who are too weak or badly injured are pushed to fight.

Some matches are over quickly when a bird takes fright.

Back in the amphitheater, the 29-year-old owner’s rooster flapped and collided with its rival, but soon ran away. His face scrunched in agony.

“Nothing upsets me more than when my rooster loses without a fight,” he said, vowing to cook the carcass of the losing bird.

“It’s not about money, it’s about pride.” CBB