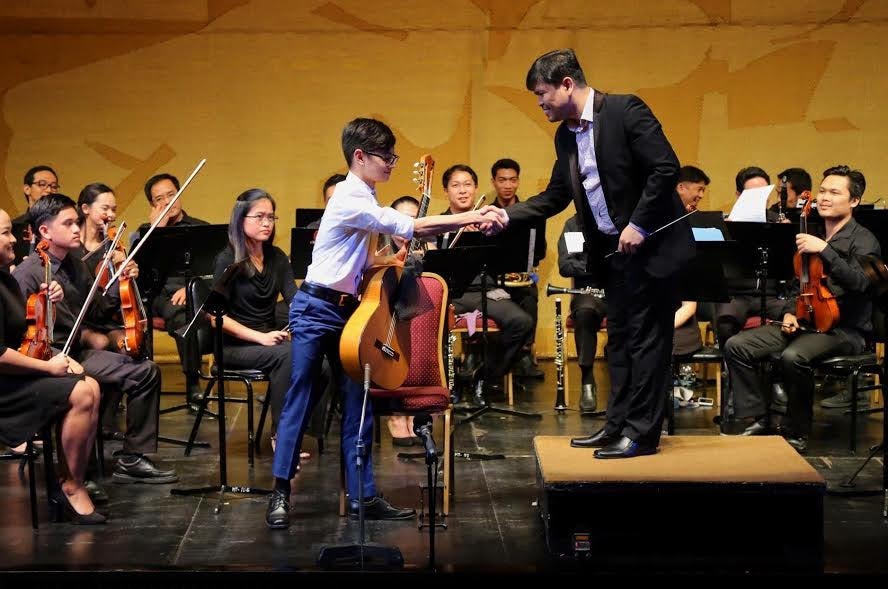 Recently at the Little Theater of the Cultural Center of the Philippines, 16-year old Sting Asistores was soloist in Joaquin Rodrigo’s “Concierto de Aranjuez” with the Manila Symphony Orchestra under Jeffrey Solares.

Going for the soloist were solid technical proficiency and youthful musicality that touched the heart.

Vivacious in the allegro con spirito movement, deeply lyrical in the adagio section and highly engaging in the allegro gentile finale, Asistores was clearly triumphant in his orchestral debut.

“It was difficult at first, but the stage fright wore off after the first few pieces,” said the guitarist. “It was challenging for me because I needed to have endurance all throughout the recital. There were times where I felt like I couldn’t continue playing the next piece because I was too tired playing the previous one. I enjoyed playing ‘La Catedral’ the most because it sort of brings out my sentimental feelings when I play it. I consider myself an emotional person. When I play the guitar, I tend to enjoy the piece more when I relate my emotions to it. I must include here the second movement of ‘Aranjuez’ because I think it’s a very emotion-driven movement.”

A prize-winner of the Junior Masters’ Competition and a recipient of the Special Prize in the Asian International Guitar Festival and Competition in Thailand, Sting is now headed for the Interlochen Arts Academy in Michigan, where two Filipinos earlier shone—violinist Joseph Esmilla and cellist Victor Michael Coo.

His talent didn’t come as a surprise since his father Noel graduated at UP College of Music as a Classical Guitar major. “My father now plays the bass, but he has a background in jazz, blues, soul and pop.”

He knew he was meant for classical guitar at an early age. “When I was 8, I took acoustic guitar lessons in band club back in grade school. I was already hooked to the guitar then, and my dream was to become an electric guitar player and be part of a band like my Dad. I used to tell myself that I wouldn’t ever read notes because I found them boring, but my Dad told me to try taking classical guitar lessons. He explained to me that would build my foundation technically for electric guitar playing in the future.”

It was his father who led him to the beauty of classical guitar repertoire. “Playing the classical guitar at first was a tough challenge for me because I found it very boring. After my first couple of years playing classical, my Dad showed me John Williams’ Seville concert on YouTube. I guess Williams only got my full attention when he played ‘Asturias’ by Isaac Albeniz. I was very amazed by the pieces’ charisma and aura. It was probably the first classical piece I heard with the strings being strummed like an electric guitar! Ever since then, I looked up to John Williams as my idol that kept inspiring me to pursue the classical guitar.”—CONTRIBUTED