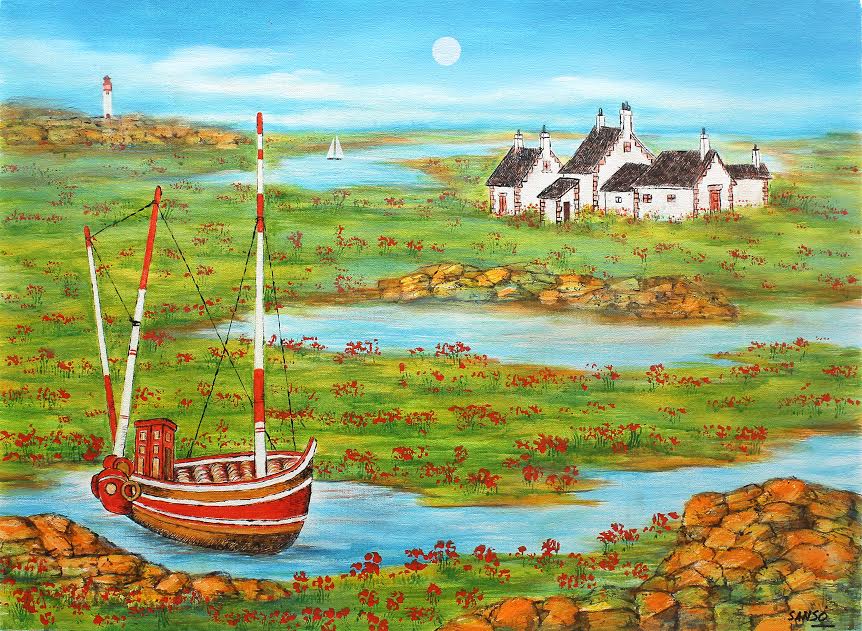 Sanso’s journey from Black Period to tranquility and enchantment

When the Sanso family moved to Manila in 1934, they arrived in a city that engendered good memories of idyllic moments. “The houses had windows with no grillwork or bars,” 87-year-old Juvenal Sanso recalled. “People felt safe and would leave their homes without even locking the doors.”

But all that changed at the onset of World War II. The Sanso residence was one of the many burned when Imperial Japanese forces occupied Manila in 1942.   On a particular day during the Japanese Occupation, Sanso was picked up by a group of Japanese soldiers and brought to a barge on the Pasig, which served as their unit’s makeshift command post. When he was telling us the story some time ago, Sanso teared up as he said, “I was tortured by the Japanese.”

He was already a bloody pulp when there was a commotion on the other side of the river, distracting the soldiers enough so Sanso could roll into the river.

Near the end of the war, a bomb fell near Sanso, killing an old man nearby and causing Sanso to lose practically all the hearing on his right ear. From that day hence, his sense of balance, aside from his hearing, was drastically affected. This is the reason why Sanso says despite having the great National Artist Fernando Amorsolo as his professor at the University of the Philippines where he took up Fine Arts after the war, he could not paint like Amorsolo. “There was so much grief, anguish and sorrow in my system I could not paint beautiful sunsets and pretty dalagitas by the river.”

Sanso said Amorsolo urged him to paint exactly what he was feeling. This ushered in the Black Period in Sanso’s artistic career. Many of his paintings had skulls or grotesque forms and faces. When he painted barong-barong (rural native houses), they came out dark and gloomy.

He won the Shell competition’s grand prize in oil painting for “The Sorcerer.” Later on he won the grand prize again, for watercolor, for “The Incubus.”

The darkness in his art followed him to Paris, where he became an internationally renowned printmaker. It was only after he met Le Dantec family that Sanso found peace. The family patriarch, Yves le Dantec, treated him like a son and invited him to stay with them for the next 24 summers. It was there that his healing began.

“There, I saw all sorts of colors, from deep oranges, pinks and purples and all shades of blue in the sky.” Slowly, Sanso, the brutalized artist, began fighting the demons in him until he found tranquility, inner peace and, eventually, unfathomable joy.

“Triumph of the Spirit” is a meditation on several works curated by Ricky Francisco working closely with Alliance Française and Fundacion Sanso. The works depict Sanso’s postwar trauma, and how these have evolved through the healing he experienced in the seacoasts of Brittany. The exhibit underscores the timeless message of hope, particularly with the recent terrorist attacks on Sanso’s beloved Paris where he lived for 50 years. —CONTRIBUTED