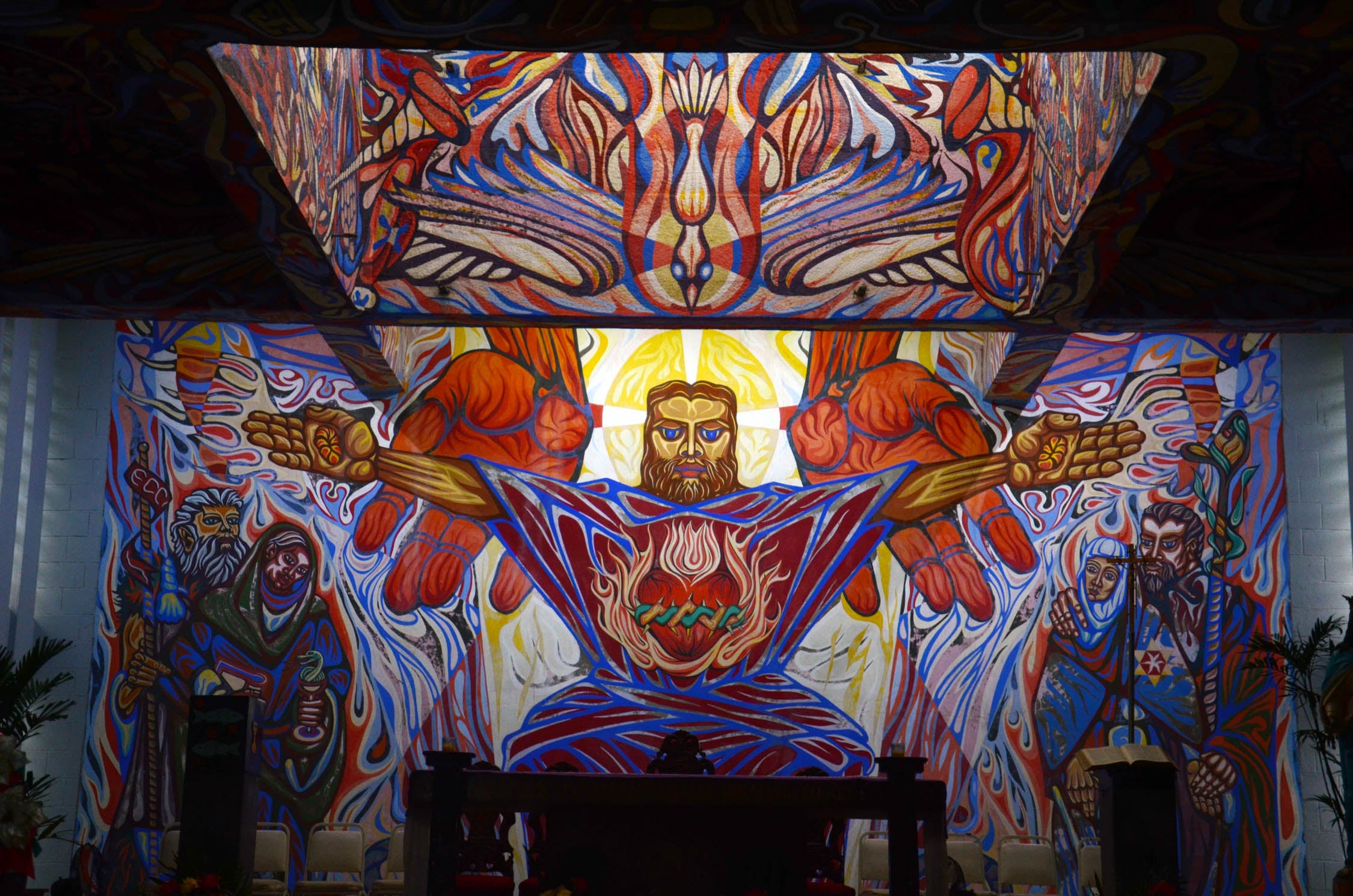 Enigmatic Alfonso Ossorio: Deeper into his art and life

A new exhibit of paintings by Alfonso Ossorio seeks to plumb into the art and life of the enigmatic artist-dilettante who had been largely dismissed in his lifetime as mere patron to Jackson Pollock and an art dabbler, but whose reputation for trailblazing art has so grown since his death in 1990 that he’s now considered the missing link between American Abstract Expressionism and European Art Brut.

“Grazing Light,” which opens this week at León Gallery in Makati, follows through the highly successful exhibit “Afflictions of Glory.” Mounted last year also at León to mark the Philippine-American artist’s birth centenary (1916-2016), “Afflictions” was the first ever major show of Ossorio’s work in the land of his birth.

The new exhibit will hang 18 works, all from the Robert Ossorio Family Collection. Art restorer and conservator Liliane “Tats” Rejante Manahan, project manager of the new exhibit, disclosed that last year’s works, which she helped curate and León Gallery owner Jaime Ponce de León insisted were of “unassailable provenance,” had also come from the same source.

“Afflictions” made certain connections between the unorthodox depiction of Christ in Ossorio’s celebrated mural at the St. Joseph the Worker chapel in Victorias, Negros Occidental work and his own tangled psychology due to his strict Catholic upbringing, having a very strong mother, and his homosexuality.

“Grazing Light” will somehow build on Ossorio’s conflicted obsessiveness, but with emphasis on his unique but very intense artistic techniques, such as his wax-resist painting method and his modern reinvention of medieval fresco technique as illustrated in his Victorias chapel mural.

Drawing from her work also as an interior designer, Manahan said the title refers to light or lights located close to the lit surface that brings into relief highlights and textures. She said that Ossorio’s methods of repetition and layering, true to the obsessive Art Brut tradition, would reveal layers, textures and shadows that endow his works their uncanny power. It may seem that “shadows” would also connect with the previous exhibit that tackled Ossorio’s “Afflictions.”

The Ossorio exhibits may be another manifestation of “repatriated” Philippine art from the West. But the issue is more complicated than that.

Ossorio, scion of a sugar clan that established Victorias Milling in Negros Occidental, left the Philippines when he was 8 years old, obtained British and American education, became a US citizen, and lived there until his death, save for a brief homecoming in 1950 to work for 10 months on the now celebrated “Angry Christ” in Victorias.

Although Ossorio was a hardworking artist, regularly exhibiting and even pioneering art styles, he was more known as patron to Pollock and a dilettante who held sway over high society in the East Hamptons, where his vast estate, The Creeks, became the hub of VIPs, artists and intellectuals. Because he was to the manor born, as an artist, he was from the art world by and large proscribed.

Classified by the media as a member of the New York School, Ossorio was at best an item of curiosity because of his ethnicity and his own art practice was both similar and dissimilar to Abstract Expressionism.

Such “dissimilar similarity” was perhaps prefigured when, at the suggestion of Pollock, Ossorio went to Paris and met Jean Dubuffet, champion of “Art Brut” (literally “raw art”). The French artist described Art Brut as having a “spontaneous and strongly inventive character.”

Dubuffet’s definition was a roundabout way of saying Art Brut works were by patients in mental asylums (“outsider art,” according to one British critic, somehow approximating Michel Foucault’s discourse on prisons and mental asylums) and by children (later “naïf art”).

Dubuffet inveighed against “culture” and “civilization” for deracinating or standardizing artistic expression. He believed that the freest expression could be found only from the mentally deranged, beyond the bounds of sanity fixed by culture and the establishment.

How West met West through East was, in fact, the thesis of—“Angels, Demons and Savages: Pollock, Ossorio, Dubuffet,” the very important   exhibit of the Phillips Collection in Washington and Parrish Art Museum in New York in 2013. It showed Ossorio’s pivotal role in the meeting of two movements that were both similar and disparate at the same time.

But as the two shows of Ossorio in the Philippines may now tend to show, the pivotal moment may have been the “Angry Christ” mural in Victorias.

Exhibited last year was a study of the mural made in Ossorio’s trademark medium, water-resistant wax on paper. It turned out he had made some 300 studies of the mural, which should underscore how Ossorio both compared with and differed from Pollock and Dubuffet.

As Manahan explained, whatever “spontaneity” could be attributed to his expressionist and raw-art inclinations was in the final analysis, “studied and very deliberate.”

It was in the studies that Ossorio was able to perfect his wax-resist method, some samples of which would be shown in “Grazing Light.”

Manahan said Ossorio would methodically layer hot wax on the drawing surface, or draw with a sharpened candle, then brush water-based paint over it; this would disperse paint over wax, creating shapes and fractals spontaneously, which the artist would interpret.

Drawing from his raw-art instincts, he would repetitively layer the image further until he could adumbrate a figure or a metaphor or, drawing from his Abstract Expressionist leaning, abstract representation.

For Manahan, Ossorio’s intense wax-resist method was also prefigured in the manic obsessiveness with which he planned, conceptualized and executed the mural.

Manahan discovered the manic meticulousness that went into Ossorio’s art when she was asked to lead the conservation and restoration of the Victorias chapel.

Manahan said she discovered Ossorio used ethyl silicate 40 as binder for the mural after consulting Ralph Meyer, a respected author of painter’s handbooks. “The effect is like a fresco: It traps the pigment so that the work seems to pulse with light, and despite the wear and tear of time, the pigment will not powder but just fade.”

She said she discovered Ossorio’s modus on the mural when she did preliminary scratches on the work to determine the proper restoration approach.

“Ossorio was a nerd, a meticulous researcher; he studied everything,” said Manahan.

“That’s why the mural is stunning except for parts that had been painted over through the years (due to irresponsible interventions),” said Manahan. “It is because of Ossorio’s use of the binder.”

Having studied in Benedictine boarding schools (St Benedict of Nursia is the founder of the Western monastic movement and now recognized as the spiritual founder of Europe), and having traveled widely, the Catholic-bred Ossorio was familiar with the medieval fresco techniques.

Light for the medieval church was a representation of God, so the Benedictine monks, who saved ancient manuscripts from the Dark Ages by copying them, reproduced them through illuminated manuscripts. Later, medieval fresco painters developed techniques to trap light that endowed their works with value illumination as well as a throbbing sense of animation.

The Benedictine motto is “Ora et labore” (prayer and work). It is very tempting to imagine Ossorio laboring over the mural but with the meditative passion of a monk in prayer.

This joining of studied contemplation and vigorous work in Ossorio may be why Manahan said she didn’t believe that Ossorio’s technique was as “spontaneous” as Abstract Expressionism and Art Brut.

“I am sucked into it; the more you know, the less you know,” she said.

Which is not to say Ossorio did not play the artistic bridge between the fiery American and the equally fiery French.

“Ossorio was smacked right into Pollock and Dubuffet,” said Manahan. “He was the common denominator.”

What has been established more or less is that his Philippine studies prefigured Ossorio’s bridge of abstraction and Art Brut, his merging of both abstraction and representation.

Dubbufet later commented that in Ossorio’s style, “the embodiment seems fortuitious.” But now we should know better.

Nothing is accidental in Ossorio’s art. At the least, it could be said his is the art of both the adventitious and the adventurous.