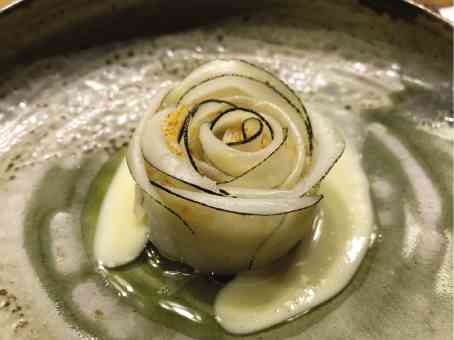 There is nothing quite boring as a detailed report of someone else’s mastication, especially when the information is not, as spies would say, “actionable intelligence.”

On April 8, after the last day of the convention, four chefs from three restaurants collaborated with Chele Gonzalez of Gallery Vask for a 10-hands dinner—more arms than an octopus, and all of them highly esteemed ones on the international food scene.

We are different, too. Our dining companions change, our tastes will have changed at every meal. We might have been in the dying embers of a frustrating relationship or in the oxytocin rush of a new one.

Hertog Jan is a three-Michelin-star restaurant outside of Bruges in Belgium. I didn’t know anything about it. I’ve spent time in Belgium and I think that country’s food is underrated, but I haven’t followed its food scene.

But I know that the Guide Michelin does not give its coveted three-star rating lightly. Many of its choices are contestable, especially outside of Europe. But to go from two stars, already hard to get, to three, requires that the restaurant not just be consistently impeccable in terms of food, presentation, service, but be imaginative and inventive as well.

On the local side, I have made no secret of my admiration for Navarra’s talent. With his wife May and a tight-knit team, he creates a great dining experience in a restaurant that refuses to call itself a restaurant.

The seats were deliberately limited, so the already intimate Toyo Eatery was further limited to a few occupied tables, at De Mangeleer’s insistence. The diners were staggered into groups, spaced two hours apart, to allow the chefs and the crew to keep their focus.

I’ve always found Navarra’s food to be cerebral and soulful. His collaboration with De Mangeleer was meditative and transcendent. Fourteen courses went by like a hallucinatory reflection on ingredients, which were not—as many chefs tend to do—made unrecognizable to seem like something else, but to be more of what they were.

Noteworthy among the fish dishes was black radish and talakitok curled into a rosebud (De Mangeleer); and little tamban and crisp malunggay dusted with a numbing Sichuan peppercorn powder (Navarra).

The centerpiece meal was a duck that had been aged for three weeks in hay. I presume it had traveled in De Mangeleer’s luggage on the plane from Belgium, though probably not in the state it was presented to us—the hay glowering and puffing out clouds of perfumed smoke like incense.

“This duck,” said one of our dining companions, a Frenchman, “is très profond.” We all nodded in agreement, absorbed in its profundity.

If the Hertog Jan x Toyo Eatery collaboration was like a lyrical set of suites, Gallery Vask’s team-up with Odette (Singapore), Nerua Guggenheim (Spain) and Locavore (Indonesia) was a seamless cascade of virtuoso performances.

I have to emphasize “seamless” because I must admit I went to the dinner with a healthy dose of skepticism if five different chefs could pull off a coherent dinner. Chefs are notoriously egomaniacal, and I thought that five chef-sized egos in a single kitchen with a lot of sharp knives would be a recipe for disaster.

But the rise of the superstar chef as a controlling artist is a recent development. The word “chef” simply means “manager” in French, and in the old days the chef de cuisine was the foreman who oversaw the team in the kitchen.

Collaborations are a recent development in the modern restaurant scene, and the least successful ones are done as publicity or marketing stunts by two chefs who tolerate each other for an evening.

The most successful ones happen when chefs respect each other and return to their roots as cooks who share a goal of making good food that will make the clients outside happy—and if that means helping plate another chef’s food, then so be it.

Gonzalez has grown into his role as host chef, allowing his contributions to complement the other chefs’ creations, neither outshining nor allowing himself to be outshone. I have to give special mention to a brilliant amuse-bouche he created in which he reinterpreted kilawin with shaved citrus ice, like a halo-halo.

We did note that three of the four establishments decided to serve an egg dish, at varying degrees of molten gooeyness. This sort of egg dish usually appears when a chef demands your attention (or applause), so the spirit of competition was very much alive.

Skillfully masterminding all of this is Cheryl Tiu, who organized both dinners and helped ensure that harmony rather than cacophony ensued from having more than one cook stirring the dashi.

In the best collaborations, everyone wins. Chefs learn from one another, are able to promote their restaurant and their creations to a new audience.

But the biggest winners have to be those who get to partake of the fruits of their dialogue. —CONTRIBUTED
Toyo Eatery, Karrivin Plaza, Chino
Roces Ave. Ext., Makati; call 09177208630.