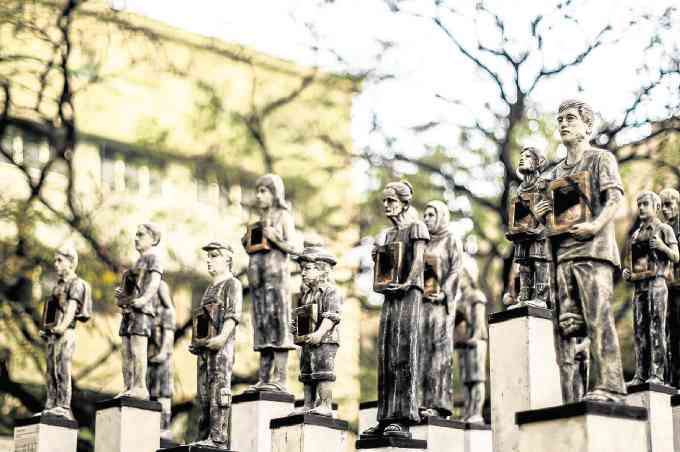 The simulated blood-stained bodies wrapped in black plastic bags on the cold floor instantly reminded us of the violent drug war gripping the country.

Echoing the event’s title, “Hudyat!” sounded off the alarm about the dismal state of human rights on the heels of President Duterte’s “Oplan Tokhang”—expressed through paintings, photographs, sculptures, installations, poetry, articles and documentaries.

“It’s really about human dignity. Cursing and exploitation—it’s as if the new accepted norm nowadays is to abuse someone,” said photographer and exhibit co-organizer Melvyn Kaldero.

He recalled being inspired after seeing the youth participate in protest rallies that condemned the creeping authoritarianism which harked back to an old martial law regime his generation was all too familiar with.

Contacting his colleagues on what they can do, Kaldero said that it seemed like a puzzle whose missing pieces fell into place. Thus was born “Hudyat!”

One of the featured artists, Australia-based Mark Valenzuela, said he values the relevance of art to society.

As to why the exhibit was held at FEU, Kaldero pointed out: “Although we were welcomed and invited by other universities, these were already highly politicized. It’s like in war, there’s no need to go to your colonies since they are already at your side.”

True enough, “Hudyat!” not only opened eyes, but also the hearts and minds of FEU students.

“Although we know that these things are happening, it’s still different to have images flashing right before your eyes rather than just on television,” said Chayne Castro, a fourth year student of Fine Arts. “It’s real, especially after hearing the stories of the victims and those directly affected, unlike us who are on the safer side. After attending the forum and seeing the exhibit, I was really motivated to do something to help put a stop to the killings.”

Genevieve Miano, a fourth year Communications student, opined: “It reinforces the need for vigilance against the blatant disregard for human rights, to remind us of our humanity, our capacity for empathy, that good should always triumph over evil.” —CONTRIBUTED