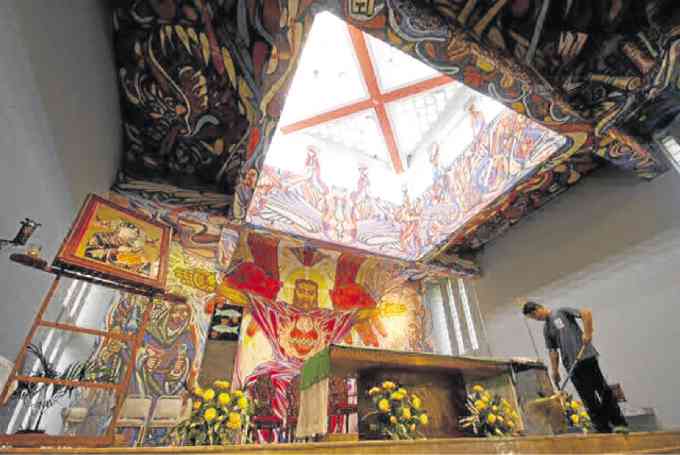 Four years ago, art connoisseur-patron and playwright-director Floy Quintos found himself repeatedly saying that word like an invocation at the chapel of St. Joseph the Worker in Victorias City, Negros Occidental. It was his fourth visit, but he found himself still staring at the “Angry Christ” mural by the late Filipino-American artist Alfonso Ossorio.

The centerpiece of the chapel, the 60-square-meter liturgical mural features an image of a frowning Jesus with a large flaming heart and outstretched arms, his feet crushing the serpentine Lucifer. It occupies the sanctuary wall and ceiling and has been a mystery to the faithful since it was finished in 1950.

“The painting was frightening (for the locals and sugar workers) back then. Parish priests over the years actually thought of erasing the image for something traditional,” said Quintos.

The question of what led Ossorio to paint the radical image intrigued Quintos. “This has got to be in a play,” he told himself.

The result is UP Playwrights’ Theatre’s latest production called “Angry Christ,” which will run April 26-May 14 at Wilfrido Ma. Guerrero Theater in University of the Philippines Diliman.

Besides Ossorio, the chapel’s design is credited to world renowned Czech-American architect Antonin Raymond. The four mosaic panels on the façade, the mural on the exterior wall, some wood carvings in the interior, the pulpit’s metal plate decorations and the enameled tabernacles were designed by the Belgian baroness and liturgical artist Adelaide de Bethune.

Ilonggo sculpture-carpenter Benjamin Valenciano is credited for the wooden crucifix, the Stations of the Cross and the images of Joseph and Mary. All can still be found at the chapel.

In Quintos’ play, the young Ossorio will be played by Nelsito Gomez; De Bethune by Stella Cañete Mendoza and Banaue Miclat-Janssen; and Valenciano by Felipe Ronnie Martinez.

Ossorio was in his early 30s when he painted “Angry Christ,” under duress from his father, Spanish sugar baron Don Miguel (Alexander Cortez). His younger brother, Frederic (Randy Villarama), who assisted Don Miguel in the family sugar business in Negros, supervised the construction of the chapel and provided the materials Ossorio needed for the mural.

“But Frederic and Alfonso weren’t at the same place at the same time. After the chapel was finished, Frederic left Victorias, went to the United States and got married. He only came back when the mural was finished and continued managing the estate. Nagkasalisi pa nga yata sila,” said Quintos.

Ossorio spent only 11 months in Victorias, from mid-1949 to mid-1950, and never came back. Based on records, the Ossorio children didn’t even spend their childhood years in Iloilo but in Manila. They just went there for vacations from their home base in Padre Faura in Manila.

“Alfonso was not Ilonggo, as many described him. He was a Manileño. But in a later interview, he said he’d always be an American,” said Quintos.

Prior to “Angry Christ,” Ossorio had exhibited in New York galleries, and his works were praised by critics. “[Salvador] Dali is kid stuff compared with [Ossorio’s] weird demonic visions,” wrote critic Emily Genauer, as quoted by writer Tats Manahan in her Rogue magazine article on Ossorio titled “The King of The Creeks.”

“And that’s what fascinated me more. It was a big mystery, a strange experience for someone who was very, very rich and detached from Philippine life to come to a sleepy plantation town like Victorias. How difficult it must have been kung ang sphere mo international artists,” said Quintos.

Described as “The Man Who Had Too Much,” Ossorio had parents who separated when he was young, which may explain why his earlier works were about lost children. His father lived in Connecticut while his mother, Doña Maria Paz Yangco, lived in the United Kingdom.

He left the Philippines when he was only 8 years old to study in a boarding school in England, and later in Harvard for Fine Arts. “With a Catholic upbringing, he was also struggling to reconcile those values as an artist and being gay,” said Quintos.

He was ahead of his time in terms of technique and vision; a handwritten note revealed he was not happy in the plantation. Quintos said it was the struggle of a man trying to communicate, as Ossorio couldn’t reconcile himself with the Baroque style then so common with Catholic religious images.

A devout artist, Ossorio continued painting smaller works at night after laboring on the mural by day. These are collectively known the “Victorias Drawings.”

In those 11 months, Ossorio left in New York his then newfound love, ballet dancer Ted Dragon (played by Josémari José), which added to the sense of loneliness.

“We know when he came to Victorias that he was struggling with his sexuality and he felt he was not taken seriously as an artist,” said Quintos. “That’s why my main concern in writing the play was, what was going on in his mind while he was painting his masterpiece?”

As Manahan put it about the elusive Ossorio: “The more you know, the less you know.”

But one thing is certain: after “Angry Christ,” Ossorio the young artist was never the same again. “It was like a rite of passage, a way of saying goodbye to his past. He was very, very creative after that.”

At 74, Ossorio died of aneurysm on Dec. 5, 1990. He continued painting up to his death, though his later work was collage and assemblage.

“Angry Christ” the play is not a factual retelling, said Quintos; he has added fictional characters like the local assistant Anselmo (played by Kalil Almonte) and a lecturer (played alternately by Micaela Pineda and Arya Herrera), and an imagined meeting between Ossorio and newspaperman-turned-labor leader José Maria Nava (Greg de Leon and Neil Tolentino).